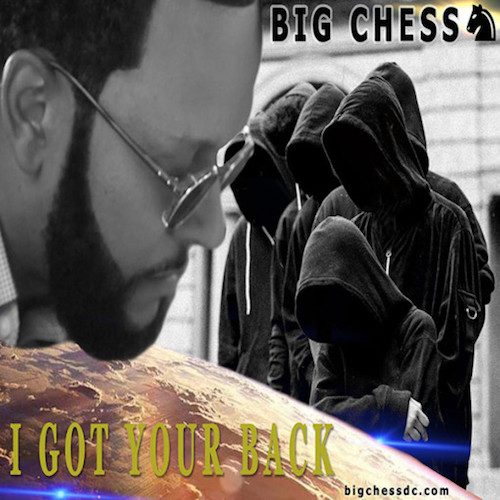 Big Chess :: I Got Your Back

The spoken word over a smooth-jazz backdrop has come to be considered a proto-form of hip-hop. If any one single artist personified this best, it’s Gil Scott-Heron. Through a combination of jazz, poetry, and soul music, Scott-Heron infused all of these through spoken word commentary on political and social issues in America. His influence can be heard in artists such as Public Enemy, Mos Def, Talib Kweli, Common, and now Washington, D.C’s Big Chess. In recent years with an exponential increase in American police brutality and racial injustice, Chess has created an album with a mission of support for the common man in these tumultuous times.

The music itself is several tracks comprised of a mix of hip-hop, jazz, sampled dialogue, and even trap sounds with sung hooks. Lyrically, “I Got Your Back” contains several spoken word tracks courtesy of Chess himself and more from cultural historian Tony Browder. The first two tracks, “Brother Tony Browder Intro” and “Mission Statement”, are of such category. One such track that’s noteworthy is “Choco-Latte City”. In keeping with the connection to Scott-Heron, the former’s “Washington D.C.” is sampled for the intro. Afterwards, Chess gives an eight-minute verbal soliloquy about life in the nation’s capital, juxtaposing his experience as a native with how gradual changes to the racial and socio-economic components have brought the city to its present.

“They Don’t Love Us” is one of several tracks outpouring the anger and hopelessness felt in Black communities. With an AutoTuned sung hook from a young boy and frantic trap drums and the rap flow that goes with it, it dramatically drives home the point about a culture of open-season on African-Americans. Considering the racial climate of the country with the murders of Michael Brown, Eric Garner, and those in that South Carolina church, as well as the lack of real justice and consequences in those cases, a statement about it being open-season isn’t one that’s difficult to surmise. “Why Can’t You Let Me Breathe” also follows this theme, but it’s more of a spoken word dedication to victims of racial injustice. It’s almost reminiscent of Gang Starr’s “Eulogy”.

“Fight” has Chess rapping at his best on the whole project. His flow was at his most in-sync with the beat on this. Drawing closer to the album, he shows his D.C. roots on “Big Brother”. Complete with a go-go musical backdrop, the song also has the female-sung hook of “You gotta fly away, fly away/get yourself to a better place”. After a while, the spoken word portions become redundant with “4000 Miles” being over eight minutes and having the feel of a coffee shop open mic night or Def Poetry Jam. The album ends with “Big Chess PSA”, consisting of melismatic lyrics over another go-go backdrop with sparse gunshot sounds meant to serve as audio symbols for the cessation race-related gun violence.

Overall, “I Got Your Back” isn’t a bad project. Despite many rough edges in terms of vocal contributions, the music itself has a sleek-jazz to it in most parts. The message is most certainly pro-social, though there’s an over-reliance on spoken word as those tracks take up a good chunk of the album. Balancing his raps with the poetry portion is key for Big Chess to have more consistency on the lyrical side.

Big Chess :: I Got Your Back
6.5Overall Score
Music7
Lyrics6