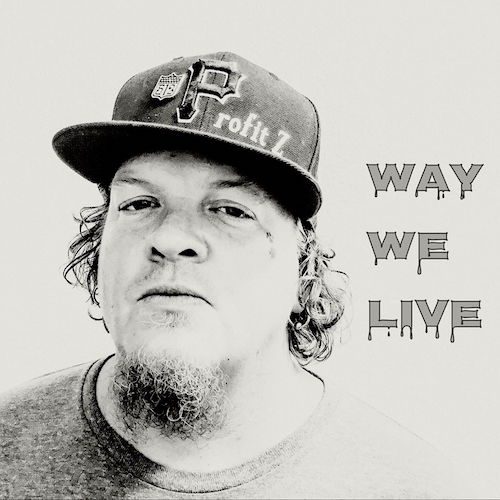 “Profit never buying what they trying to sell me
I don’t believe these news, views, lies, or what they tell me
The inside of my mind feels like it’s burning and melting”

Brother I can relate. Let’s start with the facts though – Profit is a L.A. born, Denver raised and Austin residing rapper who has had an arguably colorful life to date that would inform his conspiracy theory worldviews. He’s spent time in both the armed forces and the Texas correctional system, so he can say he was on both sides of the gun as the man enforcing law and order and the one being subjugated by it. I have to respect that experience from any man in either position since I have never been in either. If Profit seems bitter and cynical as a result I don’t blame him for it. It’s enough to make one “Crazy.”

On the title track the raspy voiced rapper gets the chance to articulate his world philosophy with the help of guest star Azurah. You probably won’t be surprised to find he’s articulating Illuminati type conspiracies, and I’m trying to hang with him and find out whether or not he states his case well, but it’s telling when the beat drops out simply so he can keep spitting his knowledge. If it kept going he’d wind up completely off beat – flow is secondary to the point that he’s trying to make. Actually he slips off the track BEFORE the beat can even cut out to let him do his thing.

“Urban jungle rumbles – piranha savages
Food stamp checks, it’s only bandages
Handing in the hand I’ve been handed
What the f#%k we landed in? The city’s like +Red Dawn+ – the tanks are American
It’s just a matter of time, of where and when
You ain’t police, or rich terrorists then
They lock us in public pens, vote Republican to win with greedy grins
they seed the sins — cracking family limbs they bleed our ends
Shouting ‘Repent from sin or face sentencing’
War on drug victims can’t read indictment sentences
What kind of census is taxation without representation?
S–t it’s just senseless kids”

The problem isn’t that Profit doesn’t have good points to make — it’s that he has TOO MANY of them and he tries to cram them all together into a verse that stumbles all over the place. If he’d talk about the war on drugs creating a police state that exists off of mandatory minimum sentences that unfairly disenfranchise minorities then go for it. If he wanted to address how right wing politicians divide and conquer the public by whipping up fear of immigrants and terrorists then profit off the expansion of the militarization of the armed forces and local law enforcement (to the point we’re almost seeing the tanks on the streets he fears) that’d be a good point too. Profit can’t seem to reign it in though. He’s got to address every conspiracy, every injustice, every bit of devilry all at once and he tends to ramble when he does. M1sta Wyte, Flobama, Ruler Why, and MasoOon are credited as producers collectively but not for tracks individually. That’s fine because I don’t want to blame any one of them for not telling Profit to slow down and match the beat a little bit, or conversely crafting tracks that fit his unorthodox delivery better. “Futuristic” needed one or the other to work.

“The fragrance is vapor
It stays in the player and haters’ll hate ya, the papers are greater
The takers’ll take ya
When dreams do come true the places they take you
Step up with snakes and watch what the fake do
These are just words I hope you relate to
But if you must pay tolls the beatings are fatal”

Hopefully the random length of the bars above conveys the awkwardness of the delivery even without the accompanying sample. I want to give Profit Z credit for being different than the average emcee, because it’s certainly good to stand out in an overcrowded marketplace, but in kindness and respect I’d like to extend the advice to him that he’s trying TOO HARD. The best political rappers can take their arguments about crooked cops and government plots and make them fit into a compelling format over a great beat. The beats here aren’t great though – just barely above par – and over and over I feel like Profit Z is so disgruntled by his experiences that he literally can’t help himself. At times it’s like he’s not even flowing but simply reading the thoughts he wrote down about all of hardships he’s seen and been through. My advice for Profit is that if he wants to live up to his credo to “record it so the future listens” then he needs to settle down, tighten up the flow, and address one of society’s ills at a time instead of all of them at once. Hotter beats wouldn’t hurt either.