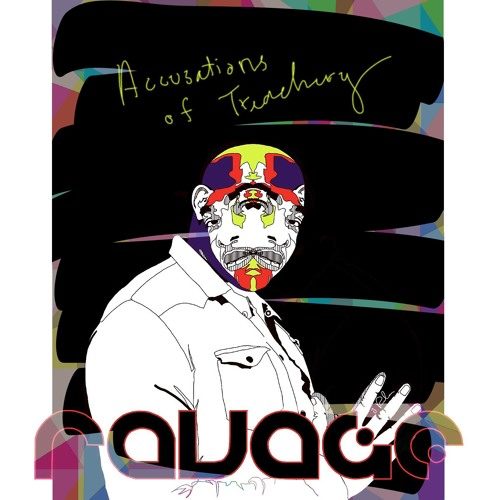 I sometimes wonder what 80s and early 90s hip-hop sounds to teenagers today. Does it sound retro and somehow purer than the music of today, the way sixties and seventies soul sounds to me? Or does it sound hopelessly outdated, like how I feel about fifties doo-wop? I think about that when I listen to an artist like Ravage who is firmly rooted in 90s boom-bap hip-hop.

Ravage isn’t some kid who just discovered his dad’s KRS-One records. He’s been rapping since the late 80s, and was signed to Sony in the mid-90s. He went on his own in the 2000s, releasing his first official solo album in 2015, a full twenty years after entering the industry. “Accusations of Treachery” is his follow up.

The motto of Ravage’s label Configaration is “True School Music.” That describes Ravage to a T. He is firmly rooted in Golden Era boom-bap, when rappers were rappers and Eric B. was president. We’re talking rappity rapping over boom bap beats. Ten tracks, one producer (Tone Jonez), two features, no skits. Here’s the thing though: it’s a 40 something dude rapping instead of a 20 something dude, which means that the tone and content of the album is much different than you might expect from a boom-bap album. There’s not a lot of macho posturing here. He’s rapping about being scared of losing a loved one, (“I’m Scared”), feeling blessed and happy (“Grateful”), sobering up (“Drugs Don’t Work”), and of course, the evils of the record industry (“Corporate Love”). In other words, grown man ish.

My least favorite thing about true school rap is when rappers spend all their time bragging about what great rappers they are, and thankfully Ravage is fully on board with the “show, don’t tell” philosophy. He shows you how good he is at rapping by rapping good. He has a measured, deliberate flow that shows signs of having spent some serious time in cyphers where wordplay mattered. He rhymes without hurry with a noticeable Birmingham accent, and sings his own hooks. As with all rappers with slow, deliberate flows, his music lacks a certain nimbleness and dynamism, but compensates by being so relentless and consistent. He also mixes his delivery up, offering more melodic rhymes on tracks like “Corporate Love” and “Ruthless Pragmatism.”

Tone Jonez produces all the tracks, mixing melodic elements with a solid layer of hard hitting beats. There are nods to Latin music, sped up choruses, soul samples, and lots of piano. The result is consistently head-nodding.

“Accusations of Treachery” is a solid album of indie true school rap. While I appreciate how musically diverse hip-hop has become in the past twenty years, there will always be a special place in my heart for the kind of meat and potatoes rap that Ravage delivers.