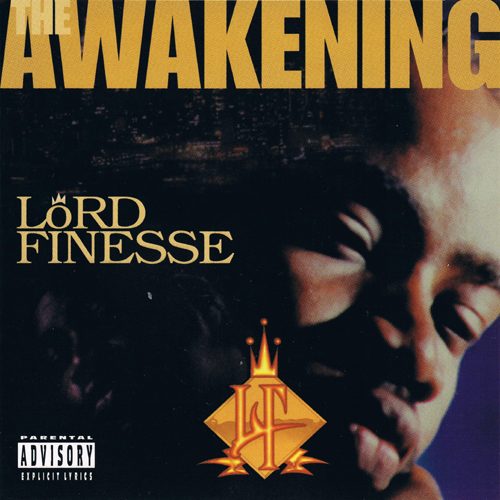 Moving as quickly as ever, the rap game had all but forgotten about Lord Finesse by 1994. It was up to the artist to bring himself back into play, first with a high-profile production slot on The Notorious B.I.G.’s “Ready to Die” (“Suicidal Thoughts”), and shortly after with the even for rap high-flying declaration “Rap without Finesse is like the NBA without Jordan” on Big L’s posse cut “Da Graveyard.” Coincidentally, Michael Jordan returned to professional basketball during the 94/95 season after a 21-month hiatus, winning three consecutive championships with the Chicago Bulls in the following years. Lord Finesse’s comeback would remain his last new rap album for the remainder of his career, at least as of this writing.

It would be easy to conclude that all evidence points towards Finesse being no Jordan, still in his days he was anything but a benchwarmer. Often referred to as the leader of the Diggin’ In The Crates crew, Lord Finesse is an iconic Bronx figure, an MC’s MC, whose influence on the art of writing raps ranks almost as high as that of the triumvirate Rakim, Big Daddy Kane and Kool G Rap. Originally planned as an EP, “The Awakening” grew into a full-fledged comeback album, complete with guest appearances and interlude cameos from peers. At the same time the album set out to prove that one department he didn’t need help in was production, only one beat (not counting an unlisted bonus track) being outsorced to Mike Loe. Sonically, “The Awakening” was a departure from the relatively simple, loop-centered bliss of his first two albums towards a more sophisticated, predominantly mellow and melodic sound structure.

Assuming full musical responsibility for the first time in his career, the man born Robert Hall set out to prove that “the Lord works miracles” both through beats and rhymes. Moving away from funk into jazz territory but maintaining his casual approach, his mid-’90s compositions cover the entire range from soft to hard, from bright to dark. “True and Livin'” creates a heavenly atmosphere with delicate chimes that could originate from vibraphones or organs, vocal snippets (including obligatory Biz Markie samples) and a snappy yet tactful rhythm section. “Hip 2 Da Game” is one of those butter-smooth tunes that were popular on the East Coast at the time, and not coincidentally one of the album’s singles. “Gameplan” was another one, a pick-up episode with Finesse in full player mode, flexing his game in an accomodating after-hours environment, complete with female counterpart and chorus. Momentary D.I.T.C. affiliate Marquee also appears on the posse cut “Speak Ya Peace,” a track that would suggest a Pete Rock influence on Lord Finesse – if it wasn’t produced by Mike Loe. Either way it fits “The Awakening” snug and symbolizes the sonic maturation.

Part of which is a darker vibe that Buckwild may have perfected within D.I.T.C. but still stands as proof that Finesse can tweak his jazz repertoire into a darker direction. “No Gimmicks” features these belligerent horns that were part of the crew’s shtick for a minute, but otherwise it’s a relatively bare-bone track that allows to focus on the rhymes and the message. The song’s remix (“Brainstorm/P.S.K. (No Gimmicks Remix)”) ups the ante with a priceless Cannonball Adderley quote, followed by an exclusive Biggie sample (off the unreleased, Finesse-produced “Come On”) and a spooky groove. Mike Loe again toes the line with the unlisted bonus track “Actual Facts,” which he co-produced with Jesse West.

“The Awakening” capped off an impressive string of 1995 D.I.T.C. releases (Show & A.G.’s “Goodfellas”, Big L’s “Lifestylez Ov Da Poor & Dangerous” and Fat Joe’s “Jealous One’s Envy”) when it was released in early ’96. Despite the evident link to Big L, it’s primarily a continuation of Finesse’s previous work, starting with how gladly he slips into the role of a minister for the hilarious “Da Sermon” intro. What follows is a diverting sequence of smooth grooves and slick raps, with some personal peeves thrown in for good measure. This rapper never had to chase cool, it came natural to him. “Hip 2 Da Game” is the quintessential Lord Finesse theme that sums up his philosophy as an artist who sees no point in bending over backwards. But even though in the grand scheme of things Finesse was able to remain consistent during the tumultuous 1990-1995 period, he did react to what was going on around him. Unfortunately the evolution was somewhat uneven.

It could be argued that on his third album Lord Finesse invested more time into the production than into the writing. There is lyrical innovation in parts, marked by more complex structures, but there’s also a proclivity for relatively bland (mostly slang-related) analogies. Perhaps interlude guest Akinyele means exactly those when he praises him for “that tight metaphoric shit that you gotta think about,” but at a time when the understanding of lyrical excellence was changing (think Nas, think O.C., think Ras Kass), lines like “Makin’ more moves than a dance instructor” and “I get girls open like a Caesarean” were decidedly past their due date.

When Fat Joe wondered the same year on “Bronx Keeps Creating It,” “I never could determine who’s the best / It was either KRS or that nigga Lord Finesse”, he also designated two different rap philosophies. In one corner we have the freethinker whose expression is as vagrant as his thinking, in the other the traditionalist, who has found his style and seems willing to stick to it for the rest of his life. To therefore witness KRS-One appear not once but twice on “The Awakening” is remarkable, but it also reveals the rather rigid structure of the Lord’s bars. And so “The Awakening” perhaps is an early example of an artist being restricted by his understanding of hip-hop, which he promises to deliver “in its true form.” A track like “Flip Da Style” highlights his influence on an act like The Beatnuts, but both his vocal performance and the lopsided merry-go-round melody come across kind of rusty with little evidence of that many styles being flipped. “Food For Thought” sounds more like 1993 with its bleating horns and formal rhythmic structure and possesses, while evidently well meant, neither the grit and immediacy of “Shorties Kaught in the System” nor the soul and sympathy of “A Lesson to Be Taught.”

Despite these reservations “The Awakening” is undubitably a lesson in hip-hop, Lord Finesse being “one muthafucka you don’t have to tell keep it real.” An essential mid-’90s New York album before Bad Boy took over the game, it’s a testament to what a rhyme can achieve. And a clever rhyme at that. There is actual, poetical proof to his boast “My Harvard style is too deep for you nursery niggas,” as the chorus to “No Gimmicks” compares to an academic analysis in a world of nursery rhyme hooks. Finesse is a highly methodical MC, in 1995 seemingly standing solid as a rock. Technical details like less effortless and more forced multis as well as a merely insinuated maturity and the impression that he seemed to have lost some of his cool prevented him from reaching earlier heights, but a lot of what made the L-o-r-d F-i-n-e-double s-e so unique and outstanding in the first place was still in place, such as the slightly theatralic but highly genuine intonation (a perpetually underrated quality in rap), the charming mix of humility and arrogance, or the ability to steal the show in any environment by virtue of pure hip-hop and rap talent.

In retrospect, with the general Lord Finesse appreciation moving away from emceeing to producing (and the artist positioning himself accordingly), “The Awakening” feels like Finesse giving his rap career one last chance. For whatever reason it didn’t work out, despite mellow singles with colorful videos and cuts successfully catering to hardcore heads. Many years later one particular track from “The Awakening” gained new exposure when up-and-coming rapper Mac Miller made unauthorized use of the “Hip 2 Da Game” instrumental for his 2010 song “Kool Aid & Frozen Pizza.” While the incident may have provoked a legal dispute (which in turn provoked some essential questions about the musical ethics in hip-hop), it at least partially reconciled an artist, who temporarily may have been wronged by history, with his artform. It hasn’t directly prompted another awakening of this sleeping giant, rather it has been Lord Finesse himself who keeps his legacy alive by cultivating his catalog. That doesn’t mean that people have given up all hope for a future new Lord Finesse album.