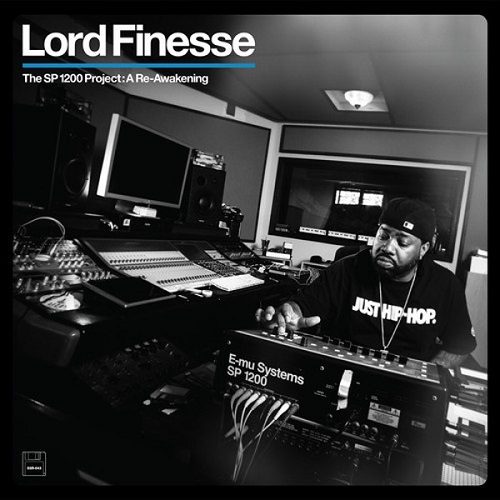 If there was a nicer way to put it, I would. But out of all the Golden Age artists, none has pimped his vintage material as thoroughly as Lord Finesse. The voluntary recycling of a relatively tenuous discography has gone on for years. Never mind the disappointment that came from realizing that Big L’s sensei had hung up the mic for good, his instrumental output, if it was new at all, seemed stuck in time as well. Still something about the title of “The SP 1200 Project: A Re-Awakening” aroused my curiosity. The E-mu SP 1200 drum machine/sampler still symbolizes everything that was musically great about early ’90s East Coast rap (a down-to-earth sound the MPC would not naturally provide), and instead of a strangely out-of-time (‘anniversary’ aside) rehashing of his last studio album, 1995’s “The Awakening,” perhaps the new release might signal indeed a renaissance of rapper and beatmaker extraordinaire Lord Finesse.

To cut to the chase, “The SP 1200 Project” is purely instrumental and does casually reference “The Awakening.” Direct quotes can be found in “Galactic Soul,” which incorporates a vocal snippet that also appears in “Hip 2 Da Game” and the melodic bubbles originally found in Jean-Jacques Perrey’s “E.V.A.” that he sampled for “Gameplan.” “Gothic Thoughts” opens with the same hysteric horns as “No Gimmicks.” Other connections are more circuitous. The drums are typically Finesse, intricate arrangements (at least for hip-hop) that proceed with a shuffling pace and sonically are made up of clunky kicks, hard snares and sometimes sleigh bells.

Throughout the 65 minutes Finesse leaves no doubt that it’s all about the music. Opener “Re-Awakening” goes right in with jazzy basslines and horns sounding off while the beat is lifted to higher spheres by inarticulated female vocals. It’s one of those theoretically unlikely combos that actually work. “Electric Impression” stacks harmonizing horns atop an early ’90s structure, “Hear the Vibes” adds Pete Rock adlibs and vibraphones to the formula, the latter breaking into a solo towards the end.

Finesse beats always have a strong kinetic side. That fact alone places them in some more or less distant past. Such a signature sound makes a more accurate classification difficult. Reportedly all of these tracks were sourced from floppy disks and DAT tapes that seemingly had been stored there for 20 years. Whether you accept these instrumentals as creations from the “Awakening” period or not, they certainly often sound like it a lot. Any post-production that may have been necessary involved Lord Finesse himself and his SP 1200 and S950. Davel ‘Bo’ McKenzie (by all evidence not a Finesse collaborator at the time in question) provided additional instrumentation, board luminaries Eddie Sancho and Tony Dawsey were responsible for the mixing and mastering, respectively, and Kenny Dope provided the recording facility.

However “The SP 1200 Project” came exactly to be, it’s the artist’s way to pay homage to his own work. There are other, less flattering perspectives on the entire operation (which I hinted at in the opening paragraph), but what it really boils down to is that these are competent and congruent pieces of music. A young Finesse once claimed that he could “flow to any musical instrument,” and while as a producer he may feel the same way, the sound and structure of his beats tend to be conservative. He creates full tracks, not beat drafts. He likes to sample from a specific era. He goes directly to the source and deigns to dwell there for a while.

Everything about “Get Down” screams ’92-’94, the uptempo pace, the upright bass, the shrieking sounds, but it also communicates the spirit of instrumental hip-hop, resonating with early Mo’ Wax material. “Timez Is Hard” is notable for knocking harder than anything on “The Awakening.” “Gothic Thoughts” escapes the organized chaos of its progenitor “No Gimmicks” with more restrained moments but still loops Big Daddy Kane vocals, a staple of said era. “Twilight Soul” is built on shuffling drums driven by hard snares, while “Check Mate” once more falls for the charm of vibes and horns, but both tracks move in a more solemn mood. “Crime Square” could easily be mistaken for a K-Def beat, although the drums bear the Diggin’ In The Crates trademark.

(Slightly) more modern soundscapes are scattered throughout the project. “Cool Ensemble” invariably pulls in horns and organs, but has a lighter, fresher sheen to it. “Moog Montage” is self-explanatory and brings in a spacey dimension that is absent elsewhere. “Midas Era” gets playful with optimistic sounds, albeit within narrow limits. “Galactic Soul” uses “The Awakening” as a starting point for more extended excursions into the realm of esoteric jazz, notwithstanding again without ever abandoning the default path. “Cinematic Soul” speaks of the crate-diggers’ soundtrack influences and leaves Finesse the producer more room to maneoeuver than the previous dense tracks. Clearly a number of now-New York MC’s from Roc Marciano to Your Old Droog would feel at home here. With “Hand it Over” Finesse tries his hands at abrasive guitars and loud one-note snares, sounding like a producer aspiring for a slot on an M.O.P. album in 2000. “Street Theme” meanwhile is distinctly hip-hop in the sense that it sounds like some underground East Coast joint from the early 2000s. As visual as it is abstract, this is a very solid track that does just fine without a rapper. The same can be said of “Abstrakt Neo Synopsis” and “Urban Exploitation,” smooth offerings that don’t have their heads stuck nodding in the nineties.

Ultimately “The SP 1200 Project” is what the shirt he wears on the cover says: JUST HIP-HOP. It’s Lord Finesse flexing his craft, nothing more, nothing less. Some tracks hint at what modern Finesse beats could sound like. In the meantime we got to hear what modern Finesse beats do sound like, on projects such as D.I.T.C.’s “Studios” and his own “Midas Era Retrospective,” and while his aim has yet to become more precise to be able to compete with the young guns, “The SP 1200 Project” will fully satisfy nostalgists and novices who appreciate that the Funky Man hasn’t betrayed his roots.

“The SP 1200 Project” saw several incarnations since its initial release in 2014. The version reviewed here is the 2015 release available digitally and on a single compact disc. Vinyl buyers were sure to get any of the collector’s editions, which really seem to be worth your time if you care about the music to that degree.