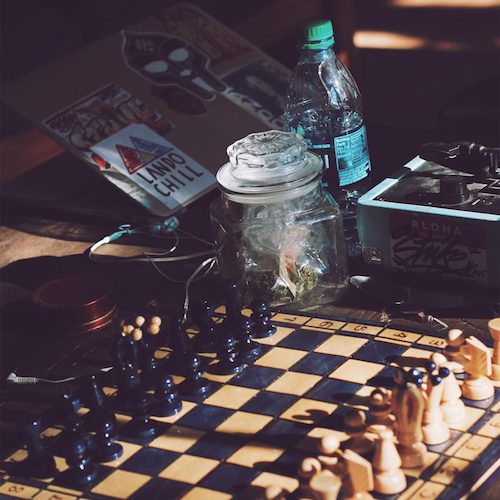 This is my first time breaking down Lando Chill, but this was actually his second project of 2016, having been preceded by “For Mark, Your Son.” Even though Lando gets the credit as the artist, and is the “voice” as the emcee, the format is actually more akin to a band or a group. Lasso (guitar and keyboards), Chris Pierce (bass) and Jimmy Borquez (drums and guitar) are Lando Chill’s band and just as much a part of the Lando Chill experience as him. In fact maybe that’s what they should have been called: “The Lando Chill Experience.” Too cliche? Yeah, you’re right. Still let’s be absolutely clear that this is can’t be called a “solo album” in any respect, because if that was the case, you could call Gang Starr albums “Guru solo projects.” The musicians are just as much a part of this story as Lando Chill himself.

Let me be even clearer – the musicians of Lando Chill’s album are making some f–king beautiful music. If these were stand alone instrumental tracks I could easily just chill out (pun intended) and enjoy the melodic grooves. Despite the braggadocious title “Better Call Jesus” and braggadocious raps (“We, fly, y’all still four legs”) is actually a jazzy fat nasty track with a synthesizer melody that sounds like it was played on glasses filled with water. The sound reverberates and bounces around in my skull with a clear ring that is sharp yet not at all harsh. It’s exactly the kind of song you’d want to listen to on a laid back summer day — too bad for me that there’s freezing rain falling on the streets outside as I’m writing this review.

Even on the songs where the band is interpolating another musician as opposed to creating their own melody, such as Ramsey Lewis’ “Les Fleur” (used by everybody from Blood of Abraham to Wiz Khalifa – though the aforementioned Gang Starr is probably my favorite) on “Floating to Nowhere,” there’s something revised through hearing it played by live musicians as opposed to a straight up loop. No I’m not saying instrumentation is superior to sampling, but that it takes something I’m overly familiar with it and gives it a less familiar twist which makes for a pleasing trip down my ear canal.

Sooner or later I’ve got to address Lando Chill the lead vocalist though, and if it seems like I’ve sidestepped that point thus far, you weren’t mistaken in that assessment. My OWN assessment is that he’s an enigma on “Madera Canyon.” At times he comes across like a hip-hop influenced singer in the mold of Andre 3000 and Cee-Lo Green on songs like “Rock Love.” At times he comes across like a laid back and introspective cat who has been set adrift on his memory bliss with songs like “Stay Gold.” Even his swear words and sexual innuendos lack a hard bite. It’s like I’m listening to Wiz Khalifa meets SkyBlew.

Repeat trips through the half hour of “Madera Canyon” are enjoyable but equally inconclusive about who Lando Chill the RAPPER is, even if Lando Chill the BAND is a throughly enjoyable hip-hop jazz ensemble. Even if your guy or your girl hates all that hardcore belligerent swaggering hip-hop that you listen to, you could take them on a date to see Lando Chill and enjoy drinks at the club while they perform, still having a pleasant conversation all the while. That’s not the usual M.O. – most performers would expect you to throw your hands in the air, wave ’em like you just don’t care, and yell out “OH YEAH” while jumping around. Not Lando Chill. They live up to that “chill” part of their name and until I get a better handle on their frontman, the musical vibes are enough to carry them through.