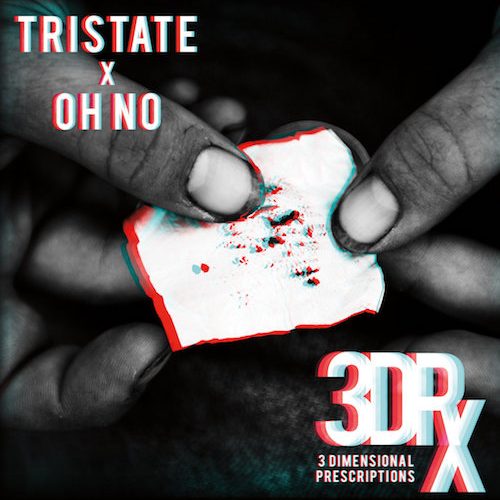 Oh No has been producing quality hip-hop for going on 13 years. He dropped his first album in 2004, and his first beat album, “Dr. No’s Oxperiment,” in 2007. Since then he’s gone on to produce or co-produce numerous releases, both under his own name and with the Alchemist as Gangrene, with whom he scored Grand Theft Auto V. “3 Dimensional Prescriptions” is his latest release, with Gold Chain Music’s Tristate.

Oh No is Madlib’s little brother, and his production style has always contained elements of Madlib’s esoteric crate-digging. There’s no genre too obscure or out there for Oh No. Whether it is Ethiopian jazz, Turkish funk, or rare R&B, Oh No is a master at mining odd snippets of music for loops and breaks. Oh No differs from his older brother in that his beats are more grounded in hip-hop rather than in outer space. An Oh No beat always hits hard, and he always keeps one foot firmly planted on earth. That tradition continues on “3 Dimensional Prescriptions,” which is 14 tracks of solid hip-hop.

Tristate has a gruff voice and an even, measured flow. It’s the kind of voice that would usually be used to deliver grimy, tough-guy rhymes, and while Tristate is no wimp, his lyrics are more intricate than his flow suggests. He’s rapping about hooking people on his rhymes on “Latest Drugs,” reminiscing about an ex on “Tears on My Nautica,” comparing his rhymes to a spaceship on “Spaceship,” and dropping artistic references on “Exit Thru the Gift Shop.” It’s a nice combination of grittiness and lyricism.

Oh No’s jazzy, funky beats are a nice pairing with Tristate’s more meat-and-potatoes rap style. Oh No keeps it grimy, but adds just enough weirdness to keep the record from falling into retro boom-bap worship. The nimbleness of the music brings out the nimbleness of the rappers, and as a result the album is full of lyricism without being boring or monotonous. Hus KingPin, Lyric Jones, Westside Gunn, Casual, Brotha J, Bro AA Rasheed, Xiomara, Planet Asia, Rogue Venom, Washeyi Choir, and Evidence all offer their skills on the album, proving worthy sparring partners with Tristate.

Maybe I’ve just been listening to too many rappers who sing or too much cross-genre hip-hop, but “3 Dimensional Prescriptions” felt like a breath of fresh air. There”s little singing, no one raps in odd voices, there’s no guest spots by indie rock musicians, no production assists by EDM DJs. Not that any of those are bad things, but sometimes you just want to hear some dudes rapping over flipped soul and jazz samples. “3 Dimensional Prescriptions” may not break new ground, but its unapologetically old school sound is well executed.