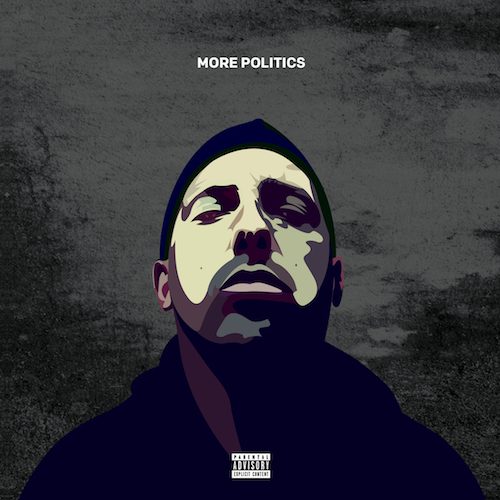 Massachusetts’ own Termanology has been producing hip-hop since the early 2000’s, eventually emerging into the spotlight on his albums and proving to be better than the average at it. I’ve pretty much taken him for granted since then and that’s my own fault. With each new album I expect “competent to above average” describes both the beats and the rhymes, and I don’t necessarily give the gruff voiced Lawrence rapper the in-depth consideration I should. As long as he’s not whack I figure “f#%# it we’re good” and move on. Since he’s clearly intending to imply that he’s come full circle from his emergence on “Politics As Usual” with the title “More Politics” though, I decided it’s time to dig deeper.

“My dreams are a million plus and that’s the minimum
Both of my seeds chillin livin in a condominium
Brought it from overseas, put it right back in the ghetto
where people lack sentimental if you ain’t tryin to do s–t for them
I remember when I got my first deal
They hated on me, they tried to kill me for real
They shot up my crib with steel, my partners some of ’em squealed
When I see ’em I get the chills I can never forgive ’em still
I’m still hustlin, skills instead of pills
Beats instead of P’s, CDs instead of kis” – “Where’s the Love”

As Termanology has moved into the “skills instead of pills” section of his life, the focus on his bars has moved him away from the beats when he rhymes. He relies on Hi-Tek to good effect on “Where’s the Love” and also procures guest bars from Bodega Bamz and Bun B – plus Masspike Miles to sing the hook. You might expect it’s a single with that much going for it but four have dropped since “More Politics” and this isn’t even one of them, so it’s clear this is a pretty deep album for only being 47 minutes long. Let me push that even further though with some other gems that WEREN’T singles — the Statik Selektah produced “Moving Forward” with Kendra Foster, the head nodding Nottz jam “Krazy Thangs” with Cyrus DeShield, and the horny horns of Just Blaze on “Just Politics.” That’s nuts.

When it comes to the songs that did drop as twelve inches or digital downloads for the deejays, they are even more overloaded. It reminds me of a DJ Khaled album except that Khaled doesn’t rap and leaves it all to his guests. When Termanology invites two thirds of The L.O.X. to rap with him on the aptly named “I Dream B.I.G.” (Sheek Louch and Styles P) he’s not content to sit back while they rap over Buckwild’s melody – he’s got to get in there and set it off right at the beginning. I don’t think Jadakiss can get mad at it, but maybe they can throw him on a remix.

Searching for tracks to not like on what feels like an intentionally short album proves futile. The closest I could come to taking issue with something was “Looking Back” featuring Crushboys, which isn’t really a BAD song but felt a little too slick like it was a Drake or Rick Ross radio single — and ironically it’s not one either! The singles that are like “We’re Both Wrong” produced by Q-Tip and featuring Saigon are straight up burners. By the end it’s clear I’ve waited too long to really dig into Termanology again. On the rhyme tip he’s never going to go down as a punchline king or be the guy with the most clever lyrical wordplay, but he holds it down as necessary without trying so hard he goes off beat or comes off like he’s trying to show off. He tells stories and he tells them well and neither his vocal tone nor his timing when he spits annoy me. Termanology was good, and he still IS good, but after a whole year of mumble rap in 2016 I think it’s time to upgrade my rating for him from “better than average” to “better THAN better than average.”