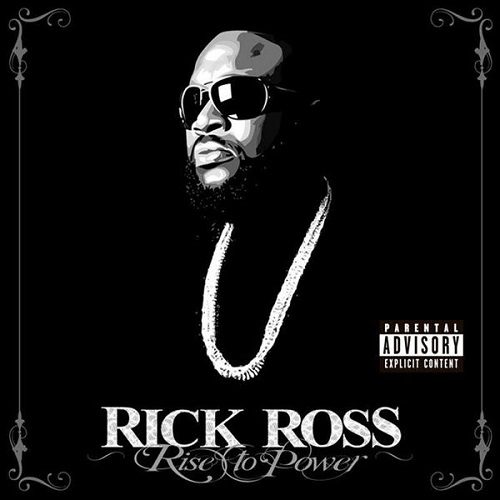 Dade County, whattup!? In the Summer of ’06 I made my first trip to South Beach in Miami, Florida. You could not walk half a block without a candy-painted low rider coming around the corner rattling the streets with the earthquake-inducing bass line of “Hustlin'” by hometown rap star in the making; Rick Ross. Hell, it seemed like “Port of Miami” was the only damn CD the locals had ever heard of, as they were way more into it than the NFL kickoff show starring Yung Joc, Danity Kane and P-Diddy. I do not blame the trend-setting, sun-tanning, socialites of the area because Ross definitely established himself as a force to be reckoned with that long-awaited LP. Likewise, it is no surprise that the original label that housed the Def Jam artist is interested in tapping into some of his unreleased material to cash in on the giant success of the big, bald-headed rapper. So the intended debut of Ross that suffered from legal woes, “Rise to Power”, is dug up by Tony Draper of Suave House and released for the fans.

Rick Ross was a relative overnight sensation in terms of national appeal, but he had been bubbling beneath the surface in Miami for nearly 12 years. Many will be surprised by the top-tier guest appearances on “Rise to Power” when flipping the CD case around at the store for a view of the track listing; Next (where have they been?), Gillie Da Kid, Devin the Dude, Clipse and Scarface are amongst the marquee that solidify this as an album worthy of a widely commercial release. Much like 50 Cent’s “Guess Who’s Back” release, we are offered the original version of a well-known artist that is somewhat different that the one that we are accustomed to. In 50’s case, many much preferred the grittier and more raw style, but it is doubtful that the same will be true when considering Ross’ “Rise to Power” because there is something less polished about him. Ross seems to lack the thugged-out quotables and deep, booming voice that he vocalized on “Port of Miami.”

The lead off single for “Rise to Power” is “Get That Bread” featuring Big Duke of Boyz N The Hood. It is a synthetically driven cut that will get the clubs moving. Jiggolo offers the production work, as he does on many instances, that sounds like it belongs on an Akon album. The element of “Get That Bread” that will really standout is the tight chorus:

It all pretty much works and compliments the typical braggadocious rhymes. Placed at track number 3; it sets the tone for the album successfully and early. The next track might be a better choice for a single. “Street Love” featuring Next has the sure-fire R&B style of a hit. In fact it is downright formulaic and perhaps too alienating for the true Rick Ross fans that expect a darker mood.

The high profile tracks are ultimately going to let down the people that are expecting a lot out of this album. “B.L.O.W. (Block Life is Our Way)” featuring, fellow cocaine condoners, Clipse is a disappointment because of a trite beat (there is no reason for Clipse without Pharrell). The song simply entitled “Blow”, which was more strictly about the white powder from the “Port of Miami” disc stunts all over this. “Dear Lord” with Scarface which should be a colossal collaboration of two Southern kings is also hindered by a sporadic beat and a comparable no-show from the main artist. Scarface outshines his counterpart with a verse about the relationship between religion, racism and sex.

The album is chock full of gangster bravado. It glorifies drug trafficking with “Bird Bath,” it makes declarations of ‘realness’ like on “Realest Niggas,” and overall is very simple and plain rap music, ironically on songs like “Simple and Plain.” No one ever accused Rick Ross of being an eclectic MC that thinks outside the box, but everything gets more tired than it did with his official debut. Most importantly, the album is unbalanced and does not have the immediate appeal that “Port of Miami” had.

An awkward aspect of this album is the addition of the 3 bonus tracks that draw it to its conclusion. The reason these standout above your run-of-the mill bonus tracks is because they are all songs by Jiggolo, a Suave House label mate who apparently raps in addition to his work behind the boards. There is even a 30 second skit that leads up to these songs that all of a sudden takes you out of “Rise to Power” into a sampler for this relative unknown. Luckily, aside from the awful moniker, he proves himself to be a solid up and comer.

In the Summer of ’06 Rick Ross came on the scene and once again nationalized Miami rap in the way Trick Daddy did almost a decade before. It seemed like one day there was suddenly a new face when “Hustlin'” came out. The follow-up â€œPush Itâ€ continued to solidify his place. He has wisely been keeping on the scene with a slew of guest spots like on DJ Khaled’s album. The idea to release catalogued material is no surprise and a wise business move from Suave House’s Tony Draper, but the “Rise to Power” Rick Ross persona is not as sharp as the one you know today.