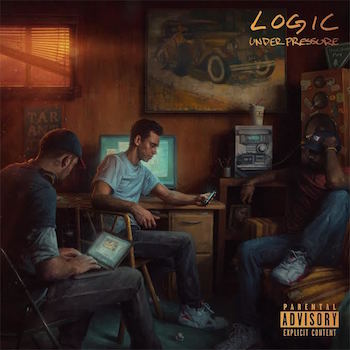 From his first released mixtape, “Psychological: The Mixtape,” to his debut album “Under Pressure,” there is none of the raw “F**ck the world, and your mama” vibe of Eminem, whom every conscious white male rapper with a buzz cut inevitably gets compared to. Kicked out of school at 16 and sleeping in a friend’s basement, Logic channeled his passion into music. Coming after three critically acclaimed mixtapes, he does on his first major-label work what great rappers do: provide a snapshot of his life.

The “Intro” brings us into his world in an intimate way that is contingent through all of his music. Rather than get on a reality show with a drink-slinging baby mama, Logic satisfies the thirst for a connection with the artist through the composition of his album. An automated voice dubbed “Thalia” takes the listener through the album and into the mind of the artist, cruising through standout pieces like the previously released single “Buried Alive” and “Driving Ms. Daisy,” with the latter featuring Childish Gambino.

Fans get another flashback into his family life in “Gang Related,” where Logic replays the reasons why he never got into the gun-slinging, casualty-prone lifestyle that many of his family members fell into, through the alternating perspectives of himself and his drug-dealing older brother. The thesis of the album is stated in “Buried Alive,” as he discusses the challenges of success over a smooth electronic beat. There’s a natural evolution from the lovelorn, confused teenager of “Young, Broke, and Infamous” to an adult dizzy with the pressures and gifts of signing a major label deal.

Executively produced by No I.D. at Def Jam as well as collaborated on by a lot of his original ‘Ratpack,’ the album has a clear West Coast influence on the more minimalist beats for tracks such as “Alright” (featuring Big Sean) and “Now.” There’s a lot less sampling than his previous mixtapes, as can be expected for the shift from backpack rapper to working in the studios of Def Jam, what some might call the “Harvard of Hip-Hop.”

Teenagers today don’t sit down and listen to an album. There’s only the hot single, the impersonal radio jingle. A major reason Logic is able to capture such an impressive young fanbase is because he is able to make the music sound like he’s right there on the bathroom floor with you after the suicide attempt, the guy who greets you every day with a sunny smile when your life is in shambles though his life is probably ten times more twisted.

Talent aside, there’s something to be said about such a dedicated work ethic. In an interview with hardknocktv, Logic states that he had “never been to a single house party” when he was producing his first mixtape. He reminds us, in this day and age where verses are called in over the phone and Auto-Tune negates soulfulness to a tinny whining, that rap is a skill; one that requires honing and refinement. When nostalgic old-timers lament the golden age of hip-hop, for those championing our current era, “Under Pressure” is the album to point to.