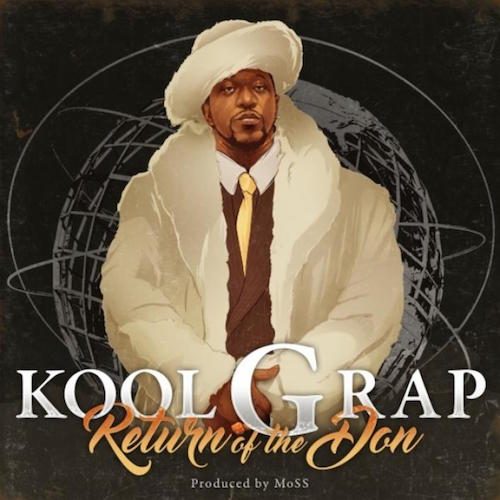 Respect for Kool G Rap is such in hip-hop that stories about him are apocryphal after over 30 years in the rap game. One such tale holds that Christopher Rios, the late great Big Pun, held him in such high esteem that he bowed down and kissed the ring on G Rap’s hand when they met, a story G Rap later confirmed. Even if it was still out there in the unverified sphere that story would still come to mind when one sees that G Rap’s new album is entitled “Retun of the Don.” That’s the homage one would pay a “don,” a title bestowed upon men of honor and seniority, an honorific befitting an elder statesman who has earned that level of admiration and loyalty.

Nathaniel Wilson is just such a man both in and outside the confines of the music industry. Even though he tells the grittiest and grimiest of street poetry through his oratory, he does so as a skilled professional and conducts his business the same way. There’s a reason you don’t hear tales about G Rap being caught up in drama situations – he doesn’t put himself on blast like that. As G would say himself he “keeps it 100” in all ways – musically and personally – so he gets respect as both a highly skilled lyricist and a wise business man that is a legend of the business. The title “don” should not be thrown around lightly, nor should any such honorific, but nothing in G Rap’s life suggests it isn’t befitting for him.

Speaking of respect, hip-hop producer MoSS decided to do his own version of “kissing the ring” by producing all of G Rap’s new album from start to finish. In modern day rap it’s increasingly rare to have that kind of one-to-one relationship between artist and producer, when it’s all about shopping for the hottest talent or biggest names who can pop off singles for you, but it bears repeating that G Rap is a respected veteran so he doesn’t need to go out like that. People will come to him and say “I can make a hot beat for you to rap on” and he can simply pick and choose who to work with, and he obviously liked MoSS enough to trust him with the entirety of “Return of the Don.” He wasn’t wrong to do so.

From the album’s self-titled opener, we see G Rap flexing in a classic fashion, flowing over an eerie backdrop reminiscent of a mid-1990’s Mobb Deep song, which makes it almost disappointing the song ends so quickly — ALMOST. The fact it’s immediately followed up by the lilting flute samples of “Mack Lean” makes up for it, with MoSS channeling his inner-Beatnuts. The song’s chorus seems a bit phoned in, but the guest bars from Fred The Godson are on point. “Your MacBook was a computer, mines was a manual.” You’re doing something right when your punchlines stand out on a G Rap track.

There are no shortage of cameos from fellow rappers showing their affection for G Rap on his first solo album since 2011 and first since The Godfathers team up with Necro in 2013. You hear Fame (M.O.P.) and Freeway on “Wise Guys,” Saigon and Termanology on “Running,” an ill “Capitol Hill” team up with Cormega and Sheek Louch, and even the late Sean Price pops up on “Popped Off” along with Ransom.

As Mr. Wilson nears his 50’s I’m checking for any signs that he might be slipping. That’s not to show the “Don” any lack of respect, but because in any competitive field you can only stay at the apex for so long. Michael Jordan isn’t still winning NBA championships. Tiger Woods isn’t still winning the majors. Rampage Jackson was ferocious in his prime, but there are young lions hungrier than him in MMA today. The fact that G Rap is still in there with the wolves is yet another testament to how he has “leader of the pack” status. I’d be overstating it though if I claimed G Rap flowed with the ferocity of his “Road to the Riches” and “Bad to the Bone” days. The good news is that rather than force something that would be unnatural, G Rap adapts and flows at a measured pace, while still packing the same intensity of inflection and attention to detail of years past. G Rap songs are like movies. He lets you see everything through the lens of LeFrak City, Queens.

“Return” is just as apt in the album’s title as “Don,” because a new G Rap album is a welcomed appearance from a voice that some of us have known since childhood. The danger for me is that comes with an inherent bias. Young heads who didn’t grow up hearing the legends about G Rap might not realize how influential he is as an artist and not venerate him the way us older cats do, and we might pay him too MUCH respect based on hazy rose-colored memories of his classics. Thankfully I think even G Rap can split the difference by working with a seasoned producer like MoSS and bringing in enough outside talent that he doesn’t have to carry the entire load of this album by himself. As such I can rate “Return of the Don” a success. It’s not the best or most important album of his career, but it’s solid from start to finish.