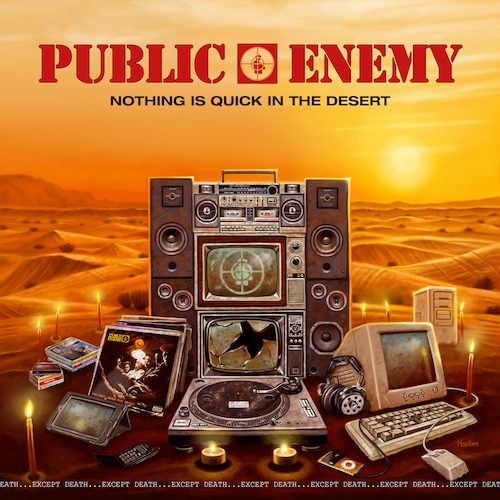 Public Enemy :: Nothing Is Quick in the Desert

Right now on the date of publication of this review, Public Enemy’s Nothing Is Quick in the Desert” is available as a free download. That timing is not a coincidence given it’s the 4th of July a/k/a Independence Day in the U.S. of A. It’s not guaranteed to be a free download in perpetuity though. If you want it free then celebrate your independence in the next 24 hours, but if you want to celebrate Public Enemy’s independence as artists, wait until July 5th or after and pay for it.

A recent listen to “Don’t Believe the Hype” reminded me that Public Enemy predicted the rise of “fake news” long before social media existed or an insane man became President of the United States. If Carlton “Chuck D” Ridenhour still possesses that kind of prescience then we might all be doomed. It’s not that you can’t bop your head to the beats and rhymes of “Nothing,” but from the artwork (which adds the subtitle “Except Death”) to the lyrics of songs like “Beat Them All,” it’s pretty clear that Chuck’s forecasting a grim future for AmeriKKKa going forward.

“What the f–k is the problem, that your world ain’t solvin?
When your plan is dissolvin, corporation replacin
what you’re callin the nation, playin with population
Why the f–k you surprised? +45+ spreadin hatred
Lens over the eyes, push you once push you twice
When the f–k are y’all ready to fight?”

A more optimistic take though would be that it’s helpful for Chuck D to still be as angry in his 50’s as he was in his 20’s. Right now as we’re being told that it’s unpatriotic to read a newspaper, believe anyone other than Kellyanne Conway or Sean Spicer, or even believe that the very freedom of religion enshrined in our nation’s Bill of Rights should apply to you whether you worship in a mosque or a church (or neither) it’s GOOD to be angry. It’s valuable to be pissed off at the situation this nation is facing. I’m not saying you should be angry about this state of affairs 24 hours a day non-stop, as that’s probably a recipe for a heart attack, but a wake up call to be “ready to fight” for your basic rights feels very timely right now. “Can you sing a song to save a life? In this time of +45+” asks Chuck on “Toxic.” Thanks to Chuck’s deeply resonant baritone, his war weary voice still packs a powerful punch.

There’s also an undeniably nostalgic quality about listening to Chuck D rap and William “Flavor Flav” Drayton Jr. still playing the hype man on tracks. As the number of hip-hop legends that pass away seems to increase by the week, I legitimately worry that Flav could be the next to go if he falls back into any of his old habits. This topic seems to be on Chuck’s mind as well on “Rest In Beats” as he gives a salute to the artists we’ve lost, covering a wide range of musicians “from Heavy D to Eazy-E”, from old school artists like Big Bank Hank (Sugarhill Gang) to modern day rappers like The Jacka. At the same time he also bemoans the death of hip-hop (music) itself:

“We lost the art of everyone being in the same studio, rest in beats
The love for the art now dipped in the dome
We lost real flows, to MUMBLES and memes
We seem to have lost the idea that we were Kings and Queens
Where are the groups? Too many going solo
We lost streets teams, promo (to) YouTube and Vevo
Man I miss the time when you really had to rhyme
When lines weren’t reduced to ghetto, studio and cryme”

There’s an inherent danger for Public Enemy in general and Chuck D in particular here though of being oversimplified as “grumpy old men” who are out of touch with the hip-hop that came of age long after the era P.E. and N.W.A were rivals for the title of “the world’s most dangerous group.” I think that’s balanced by the fact Chuck and company are still MAKING music. He’d still hold a place of honor as wise veteran even if he wasn’t making tracks, and his opinion would still be just as valuable and needed for today’s practitioners of the arts, let alone our society as a whole. His active status though lends an air of relevance to his complaints though. Chuck’s not just talking about it, he’s DOING something about it.

That being said I wouldn’t mind if P.E. was open minded to working with some of those same “mumble” cats. How are they going to grow as artists if they don’t learn from the hip-hop pioneers who can show them a thing or two? And maybe, just maybe, a few of these young cats could teach a vet like Chuck D some new tricks too. As for the production I don’t mind what they’re laying down here, but if I said you could drive around blasting it loud and proud like “Fear of a Black Planet” I’d be fibbing. That’s not to say there’s no BOOM AND POUND anywhere to be found on “Nothing” but it’s not “Shut ‘Em Down” level like those old Bomb Squad albums from the 1980’s and early 90’s. That may just be me being a grumpy old man too. I suppose the bottom line is that Chuck still has important things to say, and even if this album were completely bereft of beats, I’d still want to hear him drop rhymes along with prophetic warnings of our impending doom. Maybe we’ll all heed the call before it’s too late.

Public Enemy :: Nothing Is Quick in the Desert
7.5Overall Score
Music6.5
Lyrics8.5