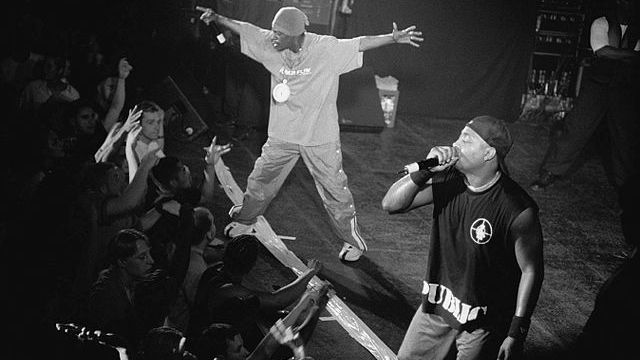 The story behind Anthrax and Public Enemy’s Bring The Noise

While neither Public Enemy or Anthrax invented rap rock (you’ll arguably have to turn to Run-D.M.C. for that), their single Bring The Noise probably had the biggest effect on the genre that became the staple sound of rock radio in the late 90s. Artists like Limp Bizkit and Linkin Park took over the airwaves after grunge disappeared in a haze of heroin and suicides, with their allegedly new genre “Nu Metal” really just a heavier version of what came of Chuck D going to a metal show 10 years earlier.

But how did that unlikely pairing come to be? Let’s take a look.

It Takes A Nation Of Millions

In 1987, Anthrax and Public Enemy couldn’t have been more different. The former were seen as puerile comic book obsessed party boys of metal, while Pubic Enemy were seen as militant rap firebrands.

However, when Chuck D of Public Enemy found himself at his first metal show early that year, Anthrax left enough of an impression on him to name check them in the song Bring The Noise from their sophomore record It Takes A Nation Of Millions To Hold Us Back.

It was actually quite a fitting song to include a fast heavy metal band on – at the time most hip hop was slower, around 99 beats per minute on average. Public Enemy goosed the track, putting it at 109 BPM, with the speed lending extra urgency.

Anthrax at the time were all huge hip hop fans, and after hearing their name on the record reached out to Chuck to say thanks and suggest they find a way to work together, something Chuck himself didn’t take too much from at the time.

While writing their fifth record Persistence Of Time, the band occasionally blew off steam by working on a metal version of Bring The Noise, with guitarist Scott Ian taking on vocal duties. Over time the band realized they actually had something, and set about fleshing it out. Once the track was mostly in place, they sent a demo to the Public Enemy camp, and Chuck quickly went from surprised to enthusiastic.

Eventually the two groups gathered in Conway Studios in Hollywood to get an idea of whether they could work together. While Anthrax were initially intimidated by Chuck D (singer Joey Belladonna said “he’s one of those guys where I didn’t want to bother him”), they quickly broke the ice with Flav, slowly destroying the studio with a combination of paint guns and BB guns.

Flav even took to Belladonna’s Native American headdress, showing up wearing it in the video that was to follow. In fact, it was during the shooting of the video, where the director got a 50/50 split of Anthrax fans and Public Enemy fans to play the crowd, that they realized they were on to something. Both audiences took to the song enthusiastically, and what was initially an experiment stared to look like something that might make waves.

The Rest Is History

One of the things that worked in the song’s favor was that MTV and radio didn’t quite know where it fit in. It wasn’t metal (though it was), it wasn’t hip hop (it was), it certainly wasn’t pop (they had this one right). In the confusion, every area of radio gave the song a chance, and MTV quickly realized that everyone wanted to see the video.

The bands followed up with a split concert tour where they would join each other on stage at the end of every night to play the song together. The tour was a huge hit, and without question was the jump off point for thousands of young metal fans to get into hip hop and vice versa.

It wasn’t long until bands like Limp Bizkit took Anthrax’s heavy metal guitars and Public Enemy’s rhymes and created Nu Metal, the sound that took over the airwaves for much of the late 90s and into the 2000s.

These days you can’t go ten minutes on rock or metal radio without hearing someone rap or at least sing in a way that’s heavily rhythmically influenced by hip hop, and there is a direct line from there back to Bring The Noise.

Similarly, the new breed of hip hop “rock stars” such as Lil Uzi Vert and Playboi Carti think nothing of sampling rock and metal songs, distorting their vocals and stage diving at concerts where moshing – once an activity solely practiced at metal shows – is not only common but encouraged.

And while neither band invented rap rock (you can thank Run-D.M.C. for that), it’s this collaboration that arguably had the biggest influence on the harder edge of the mainstream for the next 20 years and beyond.