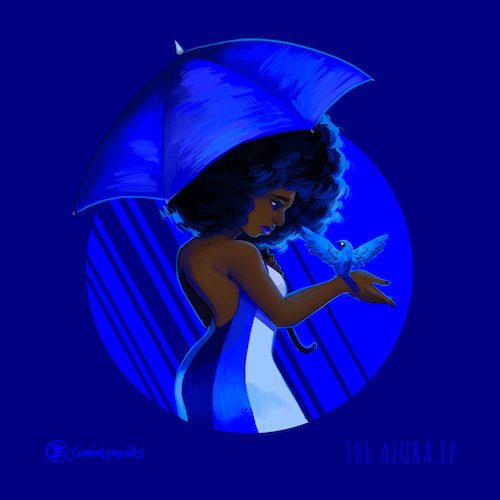 Four months ago, the southern hip-hop trio CunninLynguists released a three-track EP titled “The Rose“. Described as “a dense listen with critical rhymes about racism, police brutality, and religion”, the most prominent aspect of the EP was its color theme. The color red and its associative feelings were placed under a microscope on the EP. Given the short set’s regular use of that color, it was assumed that future EPs released by the group in 2017 would similarly follow a color theme. The assumption turned out to be correct since the group’s second EP, “The Azura”, is Old French for “sky-blue”. The feelings typically associated with the color of blue are those of being calm, pensive, and reflective. Since the beginning, the CunninLynguists have had a knack for such contemplative lyrics with their own linguistic twist, and “Azura” is no different.

The EP is entirely produced by Kno, with cuts from DJ FlipFlop. As a testament to the group’s sense of craftiness, this blue album starts off with a track that has a title that’s on the exact opposite end of the color spectrum from their last EP. The track “Violet (The Upper Room)” is a lyrical rumination on grief and afterlife. Though similar in concept to Kno’s 2010 solo album “Death Is Silent”, the track is less dark and sprinkled with mournful piano keys that remind me of the organic production found on the group’s 2007 album “Dirty Acres”.

L.A. Rapper Trizz provides the EPs sole assist with a hook on the second track, “Gone”. Musically it’s the one track that embodies one of Kno’s production trademarks: Melancholic soundscapes with haunting vocals all sampled from vinyl records of highly obscure 1970s progressive rock. You can throw him a bluegrass record or a Townes Van Zandt album and Kno will still manage to find something in them that gives life to a new hip-hop creation. Lyrically, Deacon and Natti do Chuck D’s proclamation of rap being “Black America’s CNN” proud. They both shine a light on one of America’s neglected dark corners:

Natti: “And heroes they slander hit them with scandals
Or literally kill them let the world light candles they (gone)
And they ain’t coming back, black
Unless it’s on a street sign, shirt, or a snapback
Underfunded school headstone or a back tat
Located in a trap that snap when the rat snack is (gone)”

Deacon the Villain: “They been killing off the elders
Now the village full of hellions
And the people want rebellion
What do we tell them?
Children are resilient
But their innocence is (gone)”

On the smooth “Any Way The Wind Blows”, Kno does double-duty on the beat and behind the mic.

If they follow the primary colors motif on their next EP, then it’ll most likely be yellow as the choice. It’s the one color that gets the most visual attention, which is something that’s been consistently reflected in their music and lyrics. Or, they may tackle an entirely different concept, who knows? But currently, both “The Azura” and its predecessor have left not much to be desired from the trio.