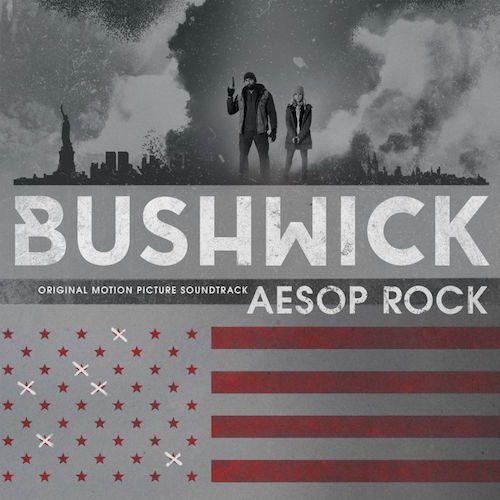 These films also have music accompanying them. If done right, the music will have its intended effect on the viewers: When properly juxtaposed with a scene, the music (whether it’s a song or a musical score) will heighten the anticipated emotions embedded in the scene. If drama and action comprise a substantial number of those scenes, then they serve to give the narrative a supplemental boost. The upcoming film Bushwick is about New York City becoming a war zone and the trials and tribulations of two characters trying to traverse just five blocks. The best part? A New York hip-hop artist has painted this film’s sound canvas in his own sonic image of urban paranoia and chaos. That’s right, Long Island’s own Aesop Rock did the score for Bushwick.

After he handled the entirety of production on his last two solo albums, I’m now convinced that Aesop Rock has come into his own in regards to being behind the boards. Though there is a flow to his beats, sometimes their off-kilter designs are just as stream-of-consciousness and seemingly indecipherable as his lyrics. Though Bushwick won’t be released until August 25th, its trailer has made clear just what the gist of the film will be. Furthermore, Aesop’s score is hip-hop, which is as urban as it gets with a film about NYC being a war zone. Albert Johnson, the late rapper better known as Prodigy of Mobb Deep, once famously started “Survival of the Fittest” off with the lyric “There’s a war goin’ on outside no man is safe from”. Honestly, it wouldn’t have hurt the score of Bushwick to have Prodigy’s line sampled in it somewhere. The score’s first single, “Corner Store”, is a good lead into the album. The drums have a frantic bounce and the synths just bleed with urgency, signifying the treacherous navigation of a now-militarized concrete jungle.

Aesop also incorporates some psychedelia into his productions starting with “Mashed Potatoes”. It certainly has a Twilight Zone surrealism to its sound, as though you’re taking your first walk outside for the day only to open your door to discover that your whole world has changed. When I wrote above that Aesop’s score is hip-hop, I should’ve wrote “almost-purely hip-hop” instead. Listening to the score with more frequency, it sounded as though he incorporated some sub-genres native to synth culture into it, including Dreamwave, Outrun, 80’s retro electro, and dark synth. The track, “Jaguar”, reflects the 80’s retro electro aspect, with the atmospheric female voice and melodic synths building in dramatic crescendo right when the drum snares with the clunky bounce fills in at 0:57.

The album has a complete length of 41 minutes and 18 seconds. That length could’ve been reduced to under 40 minutes had the less-than-one-minute filler tracks never been included. “The Church 1”, “The Church 2”, “All Fall Down” are each under a minute in length and contribute nothing to the score in terms of name, sound, or even their order in the track placement. Each are repetitive, ineffectual to the ears, and thus have no place on the album.

What’s also repetitive are two tracks that are practically labeled as such. “Corner Store Reprise” and “New Yule Reprise” are sequels which follow the same plot and flow as their original sonic templates, although the music for “New Yule” sounds like something an emcee could rap on. The second half of the album is more ominous in both sound and track titles. The creepy synths that abound “Downstairs” eventually give way to melodic drums and siren synths on “Chesterfield”. Perhaps the most fun and upbeat-sounding instrumental on the score is “Raiders”. It’s got snares that recoil into dope hi-hats and the synth melodies are at their most bubbly. “Riot Riot” takes so many twists and turns with its sound that, as I heard it, I was envisioning myself escaping from multiple enemies in a video game. Closing out the album are the tracks are “Ogres” and “Ash”. The former feels like it’s rushing towards the latter, which represents the final confrontation of an enemy, sonically speaking.

Even without having seen the movie yet, it wasn’t difficult for me to be receptive to the imagery evoked by Aesop’s score, imagery that the trailer only conveys in small inklings. For some, the electro-boom bap of his productions (for which he had some assistance from Grimace Foundation) may evoke the sounds of hip-hop’s yesteryears when Aesop was part of the now-defunct seminal underground hip-hop label, Def Jux. I can see the similarities in their discordant sounds, but the Bushwick soundtrack carries a theme all throughout: One that conveys the squalid paranoia that happens when your urban landscape becomes occupied militarized territory.