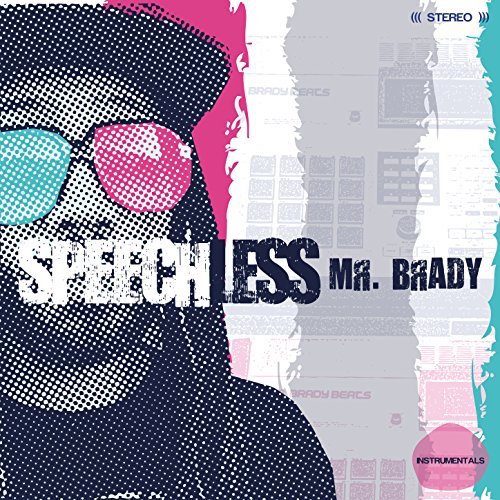 It has been seven years since we last checked in with Mr. Brady, but that doesn’t mean he hasn’t been very busy in the interim. He’s always staying busy behind the boards, whether it’s producing his own rap songs or producing tracks for the likes of Aloe Blacc and Deep Rooted. This time though Mr. Brady is doing neither. This is more of a “Donuts” style release where Brady sets out to display his musical chops without any bars from himself or anybody else. Therefore the title of this album is apt. It’s “Speechless.” Brady will literally let the beats, melodies, percussion and layering speak for themselves.

That’s not to say you won’t hear from emcees on “Speechless” though – you’ll just hear them broken up into individually chopped up portions of their bars used in any manner that Brady deems fit. Nearly two decades after his passing it still haunts me to hear Big L drops on tracks like “Hands Clap.” Despite a killer voice, phenomenal punchlines and more skills than a whole Olympics squad, he was cut down in his prime at only 24 years old. The eerie feeling haunted me when I visited New York City just months later, walking around like the “backpacker” stereotype I was with a Discman and packs of batteries steady blasting his words into my ears. Some impressions never leave you.

It’s to Brady’s credit that he can make me trip down memory lane to an instrumental like this, although he gets much less credit for George Benson’s “Turn Your Love Around” on the at least honestly titled “Love Around.” To be fair he does flip it onto some next s–t after the intro, but it’s still leaving me thinking about Lil’ Keke and Lil’ Kim instead of whatever Brady was going for. Again – some impressions never leave you.

The challenge for Mr. Brady here is not simply to better his previous efforts as a producer but to do so in ways that stand out as uniquely his and not like anybody else in the game. That’s one thing the late great Dilla had going for him, and that’s one thing DJ Premier still has going for him – a signature style that makes them stand out and creates instantly identifiable work. For better or worse I have a hard time finding that on “Speechless.” Brady doesn’t make bad beats, he just makes beats that remind me of other people not named Mr. Brady. “Janet If You’re Nasty” feels like Deacon The Villain. “Opera” sounds like Madlib. The biggest irony of all is that “Digi Love” doesn’t sound Bobby Digital himself – it actually sounds like Jay Dee. At least we’ve come full circle.

I kept waiting through 55 minutes of (good) music to hear that one thing that just screamed “This is the Mr. Brady style, this is his trademark, this is that s–t.” It didn’t happen for me. The closest he gets to a trademark is a woman who periodically says “You are now listening to Mr. Brady beats” but what producer doesn’t do that now? Make no mistake about it that songs like “Ready or Not” and “Way Down” are a pleasure to listen to, but I find myself asking what the point is, and if Mr. Brady even knows who he wants to be. Perhaps it’s a fault of perception in the ear of the beholder and the point was actually that Brady’s so good he can imitate just about any style. If so he’s truly left me speechless.