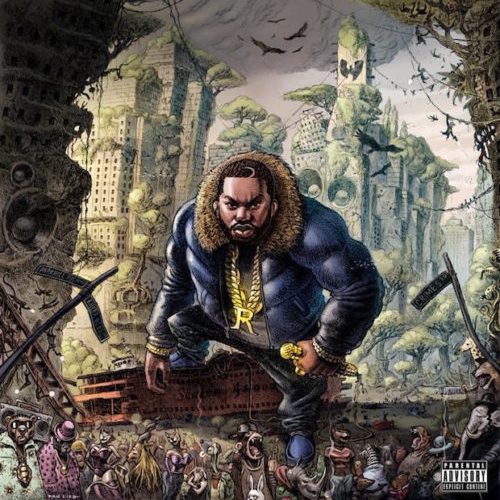 In my review of Wu-Tang Clan’s disappointing “A Better Tomorrow” I talked about Raekwon and RZA’s differences and how much better that record could have been if Raekwon’s vision was realized, rather than RZA’s. With “The Wild”, Raekwon’s eighth solo LP, we have proof why Raekwon should be leading the Wu-Tang Clan’s next record, especially from a production standpoint. You see, “The Wild” is a consistent little record, confirming how the Wu needs Rae but also reminds us why Rae needs the Wu too.

Minus the appearances of Lil Wayne and G-Eazy, there’s a noticeable lack of backup which Rae’s best work has benefited from. Partnering with Ghostface on “Only Built 4 Cuban Linx…” and then half the industry on its sequel, there’s a disparate feel to “The Wild”, particularly with the less energetic delivery as Rae approaches his fifties. It’s a good thing then that the production is largely solid throughout – despite the album title there’s a clear decision to craft a mature, smooth sounding record. Storytelling remains the Chef’s speciality; “Marvin” is a snapshot narration of the eventful parts of Marvin Gaye’s life with Cee-Lo Green tying it together with one of his smoother warblings.

The best tracks just so happen to feel the most Wu-Tang: “Nothing”, “Crown of Thorns” and even the Weezy collaboration “My Corner” don’t disappoint. The problem with the album lies in the decision to use dated beats. “Visiting Hour” is like a throwaway from the “Recovery”-era Eminem, built around Raekwon’s message to those considering a life of crime and how he risked that 25-to-life lifestyle (conveniently, a song from Eminem’s “Recovery”). “The Reign” and “M&N” feel like something Saigon spat over ten years ago on a mixtape. Again, solid tracks but nothing particularly memorable.

Generally, the Wu have fared well in recent times, with Ghostface’s storytelling style meshing well with Adrian Younge’s moody backdrops, Inspectah Deck’s second life with the CZARFACE records reminding us how dope his flow is, and even Cappadonna had that “Eyrth, Wynd and Fyre” double-disc project (don’t sleep)! Granted, Method Man’s “The Meth Lab” was a pile of arse, but that’s largely down to there not being enough Meth. “The Wild” is decent, but also frustrating for that exact reason – it’s just decent. Yet, decent Raekwon is still worth listening to. I have to give Rae credit for how he has put out an album with tracks like “This Is What It Comes Too” as lead singles.

Much of “The Wild” is standard album track fare with Rae in his comfort zone, but it’s delivered with aplomb and will satisfy most fans. Those expecting something a bit more Wu-Tang or a full record of classic Chef rhymes will be disappointed, as will anyone asking for beats of the standard both “Only Built 4 Cuban Linx…” albums had. I enjoyed it but found it all a bit underwhelming, and while it’s better than “A Better Tomorrow”, that’s not really the praise a Raekwon album deserves in 2017.