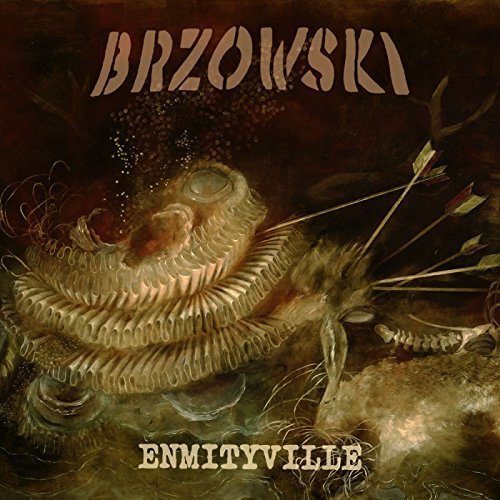 Last night, I attended a party with a bunch of writers, artists, and musicians. It was exciting: everyone was witty and stylish; the guests were all engaged in ambitious, slightly whimsical creative projects. It was the kind of party that makes you want to go home and write a one-act play, build a sculpture from found objects, record a demo. In the corner, working steadily through a 12-pack of Miller Lite, was a guy I didn’t know. Black tee-shirt, cargo pants, work boots. He’d add to the conversation now and then, but his contributions always took some of the air out of the room; they were doubtful, maybe even despairing, about the purposes and outcomes of artistry. Deliberately or not, he reminded us all that the city, the world outside this cozy kitchen was not a place that’s kind to creators. The odds are slim that this stranger knows Brzowski, but I bet they would really get along.

Brzowski is a veteran of the gothic hip-hop scene, having self-released a couple of EPs in the early ’00s before signing with Milled Pavement in 2006. Since then, he’s recorded, collaborated, and toured steadily, spreading wintry gloom from his home base in Portland, Maine, around the US and to the shores of Europe. “Enmityville,” his third solo album for MP, is rooted in the frustrations of a working class artist whose “work boots are full of lead.” It’s not an album that appeals to a broad audience, but Brzowski’s base has plenty to appreciate here.

On first listen, “Enmityville” is dour, the sonic equivalent of a New England town in perpetual mud season. There are moments when the backing tracks recall the music that goth kids were into when I was in high school: a grinding, distorted guitar throb; deliberate, processed percussion; atmospheric, minor-chord keyboards. That sound doesn’t exactly abate, but after a few play-throughs, there emerge some almost-catchy chord progressions, like those behind the rapid-fire chorus of “Lachrymimosa,” and some hints of a groove, as on the industrial head-nodder “Microplastics.” Try as he might, Brzowski can’t displease some of the people all of the time.

As a vocalist, Brzowski brings a low, truculent snarl that seems part and parcel of gothic rap and is perfectly in keeping with the abrasive sound of the album as a whole. What’s surprising is his ability to maintain this while rapping huge chunks of language crisply, clearly, and quickly. Doing so is essential, as the lyrics are the most engaging element of the album. They typically take the form of free verse, playing with internal rhyme and assonance more than conventional end rhymes. Literate, sound-forward wordplay balances vivid, free-associative imagery throughout. For example, consider the following, from the plodding, seven-minute closer, “A World Where There Is Only One of Everything”:

“A selfie of Dorian Gray, beatific, fading
Swarm of fruit flies left the still life out to wilt on pedestal
The sunlight is corrosive
Keep the paint away from the windows
Faded hues will be less intense
This is what calendars do
Falling away in pieces and increments
Fragments of fragments of dust
Made from dead skin cells
This ain’t a charnel house
It’s a big box emporium imperium
Needful things in a wooden box
Framed by the seaside to take home and feel cultured.”

Brzowski’s lyrics are often framed and enhanced by lengthy samples of dialogue from movies and interviews, as on the opener, “Masking Fluid and Painter’s Tape.” Over a springy synth line and skittering drums, Brzowski reflects on his own youthful naivete about the prospects for success in the industry:

“I was ready for anything
prepared for metaphorical war games
stuffing CDRs in mailers
spreading out from the taproot, radiating
These were simpler times
I thought I was capable of anything.”

“Masking Fluid” juxtaposes these sunny memories with a refrain taken from the 2013 film “CBGB,” in which de facto club manager Merv Ferguson explains a piddling payout by declaring “Art sucks.” The track also samples heavily from a 2004 recording of multimedia artist Mike Kelley discussing the challenges of making a life in the art world, in which he asserts, “When you chose to be an artist, you were basically saying, ‘I want to be a janitor.’ And that was OK with me, because I had no interest in dominant culture.” Read alongside the rest of the song’s lyrics, Kelley’s claim becomes a kind of thesis statement for Brzowski’s approach on this album.

Eschewing a chorus, “Masking Tape” sets a clear, nonconformist tone for the album, avowing a commitment to an artistic vision that, like Kelley, has no interest in dominant culture. “Contemporary Cynic (Don’t Care)” complicates that commitment by interpolating the insistently poppy hook from Phil Collins’s “I Don’t Care Anymore” (albeit in a Danzig-esque baritone). Over these backing vocals, Brzowski recites a cleverly metalyrical chorus:

On “Contemporary Cynic,” Brzowski is at his most self-consciously ironic, opening with a bite-and-twist from Allen Ginsberg’s “Howl”: “I’ve seen the greatest minds of my generation destroyed by who gives a fuck,” closing with, “My life’s work will live on forever / a land full of corrupted files,” and sneering, “I’m glad you had some kids / the world needs some more wage slaves.” (Incidentally, this anti-procreation stance recurs in “Surplus Humanity,” on which Brzowski urges, “Women and children first into the furnace,” and declaims, “It would be preferential if we were nuked in the eighties / Let’s hock some more product / and birth some more babies.”)

Elsewhere on the album, Brzowski does take advantage of conventional verse-chorus-verse structure, most successfully on “So I Walk,” a song that is propped up by a melodic bass line, a buzzy synth, and more deep baritone vocals on the chorus. The song alludes, through newscast and interview clips, to the story of the “North Pond Hermit,” Christopher Thomas Knight, who lived in the Maine backwoods without human contact for 27 years. (It also features one of at least two references to the novel “Needful Things,” by another fellow Mainer, Stephen King.) “So I Walk” is as close as “Enmityville” gets to a pop song, and it might even be a little playful, closing as it does with the lines,

“I’m a fossil fuel
to be burned out soon
best rapper in the woods
best dentist on the moon.”

According to press materials, Brzowski composed the bulk of “Enmityville” while on tour. The title, then, seems to refer not to a fixed locale, but to the place Brzowski carries on his back, a portable shelter that’s characterized by frustrated aspirations, bitterness, and cynicism. It doesn’t seem like a very nice place to spend time, but for Brzowski, it’s home.