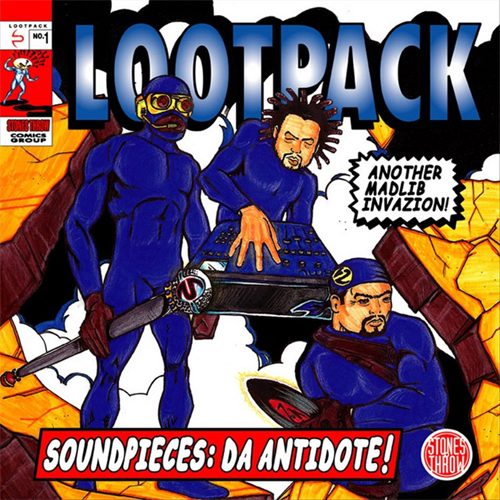 Lootpack was formed in 1990 in Oxnard, where members Madlib, Wildchild, and DJ Romes went to high school. They first appeared on wax on “Turn the Party Out” from the Alkaholiks’ debut, and had a track on the ‘Liks follow-up. This lead them to record the “Ill Psych Move” EP in 1996, which in turn caught the ear of Peanut Butter Wolf, who had just started up Stones Throw Records. 1999’s “Soundpieces: Da Antidote!” is the result.

“Soundpieces” showcases Madlib’s eccentric, crate-digging production skills. Madlib has developed into a mad genius on the boards, and “Soundpieces” gives a fairly early glimpse of the beat konducta at work. The beats on “Soundpieces” aren’t quite as experimental as some of his later work, but his knack for left-field samples and minimalist grooves are instantly recognizable. “Questions” opens up the album with a chopped up soul sample riding strings and piano over a midtempo beat. Many of the tracks on the album follow the same template, with boom-bap beats layered over a collage of strings, pianos, and vocal samples. Madlib samples everyone from Miles Davis to Mavis Staples to KRS-One and the Wu-Tang Clan. There are a few uptempo tracks, like “Whenimondamic” and “Hityawitdat,” but the majority of songs are midtempo head-nodders. Madlib truly shows his abilities on “Episodes,” a 9-minute opus divided into five distinct “episodes,” each with a different beat and different MCs. Madlib flexes some of his trippiest beats, all the while managing to keep the whole song together. It’s a lot like his psychedelic masterpiece “The Further Adventures of Lord Quas,” which had a similar stream-of-consciousness vibe.

Lyrically, “Soundpieces” is classic late-90s true-school battle rap, offering an antidote to the mainstream hip hop that was dominating the airwaves. There are no fast cars, Cristal, or glocks on this disc, just fierce rhymes and a dedication to real hip hop. Wildchild is a solid and skilled MC, as he proves on “Episodes”:

“Focus, Wildchild representative of hip hop
top 10 niggas get mopped 10 times
My rhymes will transform into 30 thin lines cuz I feep I’m
The responsible obstacle
For you non-freestyling MC’s kickin’ lots of bull
I rock shit till the Eucalyptus
Flaunt it like, haunt ya mic to the point ya mic tells you
“You can’t rip this” I’ll get it exited and, get the crowd hyped and
Slap you up with my right hand and
Find out you’re a little white man with a slight tan
Wild Child’ll take ya ass out like lightning
Fresh in the flesh, steadily enlightening this mic
The fact that you lack the respect, got the mad knack of incompetence
Step to Jack and get smacked to lower your whole lack of confidence
Ya bro’s out there know you have no composure
You unnoticibly slide to the back of thee
Open mic session with ya little wack faculty
Thirty minutes, prior to getting there, claiming you had the knack to be
The dopest MC, that was the most inactively
Statement you ever said to Jack, you see
The day you took hip hop into ya hands was an act of lunacy”

Madlib sounds as blunted and half-asleep as ever, but he still manages to deliver his fair share of verses, and provides a contrast to Wildchild’s more dynamic flow. “Soundpieces” also features one of the first appearances of Madlib’s helium-voiced alter-ego, Quasimoto. The album’s features read like a who’s who of late-90s indie rap, including the Alkaholiks, Rasco, and Dilated Peoples. The future Stones Throw roster is also on deck, with Medaphor, Oh No, and Declaime (aka Dudley Perkins) offering verses. The guest rappers add some variety to the mix, and the variety is needed, because the 24 tracks on “Soundpieces” can sound somewhat monotonous taken all in one sitting. There is a sameness throughout the album in terms of the beats, the flow of the MCs, and the subject matter. It’s essentially 79 minutes of understated rapping over understated beats. It’s great in one or two-song increments, but starts to all sound the same after a few tracks.

“Soundpieces” didn’t exactly knock Puff Daddy off of the charts, but it has become something of an underground classic, a status which it deserves.. It also jump-started the career of Madlib, who has gone on to do numerous other projects, including Quasimoto, Yesterday’s New Quintet, and Madvillain. Quasimoto’s 2000 debut, “The Unseen,” is a lot like a more irreverent and foul-mouthed “Soundpieces,” but with each successive album Madlib goes further towards the outreaches of hip hop. “Soundpieces” also helped cement Stones Throw as THE underground hip hop label, largely due to and in symbiosis with Madlib’s success. For that alone it is worthy of praise, and it still holds its own ten years later.