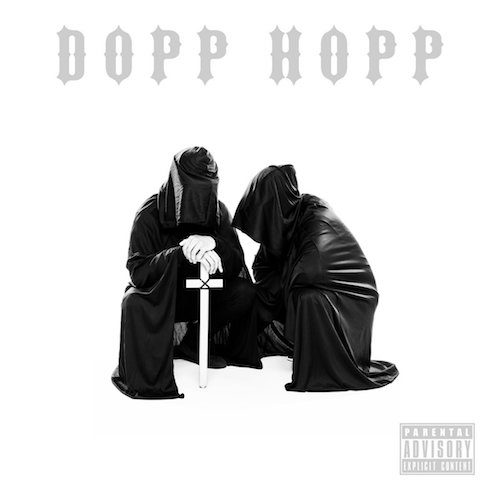 There is a select group of artists who have a knack for saying the weirdest things – Action Bronson is certainly one, but The Doppelgangaz are masters. Casual listeners may not be able to decipher a single line of any of the tracks on “Dopp Hopp”, but experienced ears will enjoy picking apart obscure references and the creepy humor tying it all together. Even the first track, reciting the letters D-O-P-P H-O-P-P sounds like D-O-P-P Ate-Yo-Pee-Pee. Or maybe I’ve been listening to this record too much late at night?

The lines go darker than that, particularly on the standout single “E.W.W.”. Matter Ov Fact and EP love an acronym, and “Every Which Way” is peak ‘Gangaz:

The costumes and jokey content are packed with descriptive vocabulary and terms deeply entrenched in American culture.

“Still Dumpster diving and digging through them trash mounds agh
Former miss Orange County up in the ash crown Vic
Said she only fornicates wearing the sash gown, sick
I come through in the Petrovic
With no dental coverage, just chewing on some Dentastix
Living like some kids, yo fuck a bunch of saloons
All I need is a bagged lunch from mom dukes and a Bunch O Balloons
Agh some Cap’n Crunch and a spoon
See I’m a simple man hunched over watching toons
Or chilling with Mandy, off the path of the meadow trail
While I’m getting a handy with some clip on stiletto nails”

The childish tomfoolery could be construed as corny, yet it never feels that way. “F*** a bunch of saloons” covers both the lifestyle of hanging out in bars and purchasing luxury cars – and dude’s turning them BOTH down for his mom’s packed lunch. Then only a few bars later Matter is catching a hand shandy in the countryside – something that also lends the duo a unique visual appeal (the countryside, not handjobs). Hip-Hop as grimy as this is often associated with concrete backdrops and dusty alleyways, but the rural locations and decision to use cloaks as their get-up only adds to the idea of being a ‘Ganga. “Roll Flee” is their spin on the West Coast hip-hop sound (accompanied by a Troutman-esque vocoder effect) that bangs nicely, sacrificing some of the lyrical impact found elsewhere on the album. It’s no surprise to hear it’s a single too:

The duo have released instrumental projects in the past and they continue to be underappreciated as some of the finest beatsmiths in the business. “I’ve Been” is a smoother jam, yet the harder songs are rock solid. “Bubblin'” is nasty, “Beak Wet” is on some Havoc in ’96 steelo, hell, the more accessible closer “Die 4 It” even goes hard.

Bumping Hammer’s “Too Legit 2 Quit”, going for girls with “Strong Ankles” – Matter Ov Fact and EP are clearly not your typical emcees judging by their influences. We’ve covered Doppelgangaz albums in the past and they tend to have a few certified speaker splitters balanced with more laid back tracks. What makes “Dopp Hopp” more memorable is not just the consistency of the production but the potency of the rhymes. Lines like “Shorties who want their hinies spanked / She said, ‘F*** a shower just hit me with the grimy shank'” are outright hilarious, and this dirty aesthetic somehow meshes perfectly with the crisp, heavy kicks and booming bass.

It’s a formula they’ve been using for nearly a decade now and it’s never sounded so good.