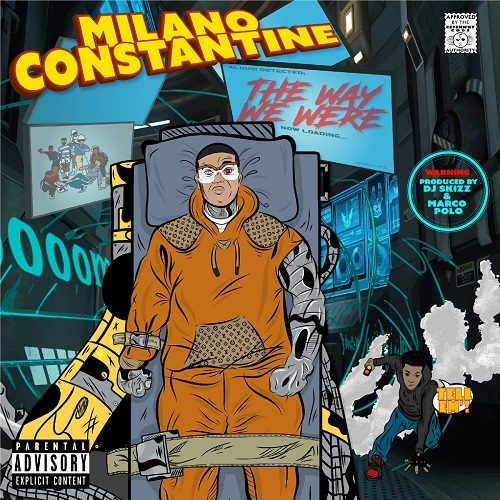 Milano Constantine :: The Way We Were

Who said New York hip hop was dead? It’s harder than ever.

The shift from traditional rhyme-machines such as Papoose and Lloyd Banks towards slang-heavy storytellers has brought a Wu-Tang feel not even the Wu can deliver themselves. There are so many artists in this field now: Action Bronson, Roc Marciano, Ka, Planet Asia, Freddie Gibbs, Your Old Droog, Hus Kingpin, Ghostface Killah, Meyhem Lauren and Eminem’s recent signings Westside Gunn and Conway the Machine. Granted, they are all unique and utilise different production styles (and of course, these aren’t just New York artists), but other than perhaps Planet Asia’s earlier work, they aren’t exactly getting busy over traditional 90-BPM boom bap beats. This does mean some projects need the listener to be in a certain mood to fully appreciate; the primary reason why I wasn’t enjoying “Rosebudd’s Revenge” as much as previous Roc records. Thankfully, Milano Constantine’s down with D.I.T.C. and comes equipped with more traditional fare.

As an unofficial member of the Diggin’ In The Crates crew, Milano has gone under the radar in recent years but has returned with a quintessentially NYC slice of rap governed by the reliable hands of Marco Polo and DJ Skizz.

There’s little to fault on “The Way We Were” – it is what it is. Nothing quite matches the classic 2008 single “In A Zone” (produced by P Brothers) but there’s plenty to enjoy. The yearning for an earlier era is frequently talked about in underground rap and Milano shares his memories on “The Way We Were”, trying to bring back “That Feeling” associated with classic Biggie. Any doubts over his spitting ability are laid to rest on “Cocaina” as he gets busy over a faster DJ Skizz instrumental. Lil Fame pops by for “10-4”, but the standout guest is Conway who murders “Rasclat” as you’d expect given his recent run:

“You a bum, almost fifty and you still snatchin’ purses?
Sneak diss and you’s just askin’ for verses
Nigga you don’t want trouble, you just want to work
Lay you under the dirt, face in front of your shirt
I don’t shoot fair ones, I’m tryin’ ta air suttin’
I’m from east side Buffalo, f— where they’re from
Catch me at Red Sticks havin’ lunch, f—-t jump
My savage blast a pump, have you slump[ed]
Wounds so big we can see through your body, back to front
Is that what you want?”

When hip hop heads say they wish Nas would pick better beats – they are talking about this kind of production. Skizz and Polo keep it simple but ensure the D.I.T.C. legacy is maintained and deliver one of the better traditional NYC records of recent times.

Milano Constantine :: The Way We Were
7.5Overall Score
Music8
Lyrics7