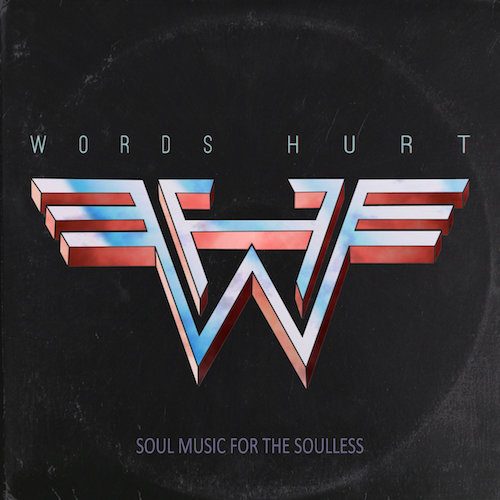 Until recently when you Googled “Alaska Twitter” or even “Tim Alaska rapper” something unfortunate happened. Instead of getting Timothy Baker a/k/a Alaska of Atoms Family and Hangar 18 fame, you’d get a white rights troll named Baked Alaska instead. It’s an unfortunate coincidence because both have the same first name and B.A. is actually a FORMER rapper who hails from Anchorage. The vile sentiments that B.A. spits have gotten him suspended from Twitter (apparently for the second time) but that fact just points out the hypocrisy that they will go after a low level target instead of the Troll-in-Chief who spends his days attacking black athletes and praising Nazi protestors in Charlottesville. For the time being at least the rapper who isn’t carrying tiki torches comes up first.

Alaska has been working with producer Lang Vo for a while now under the group name Words Hurt and “Soul Music for the Soulless” is their third album together. It’s an apt name for the times especially considering the OTHER Alaska mentioned in the first paragraph. In fact songs like “High Water Mark” reflect the depressing reality of this era, punctuated by samples from the movie adaptation of Hunter S. Thompson’s “Fear and Loathing in Las Vegas” as played by Johnny Depp: “With the right kind of eyes, you can almost see the high-water mark.” Vo’s simple but effective low end piano keys punctuate Alaska’s dark lyrical tone.

“It’s an outrage economy, constantly keep ’em pissed off” intones Alaska, and while it’s not a cheerful way to look at our social and political landscape in America, it’s certainly not an inaccurate one. That’s the kind of artist he is in general though. Alaska is the “uncomfortable truth” rapper, the one who holds a mirror up to the world to show you how ugly it is, even if you have the unfortunate distinction of being in the reflection. That’s why he can call himself the “World’s Worst Life Coach” and offer wisdom like “Burn yourself alive, die and hit refresh.” OUCH.

There’s beauty in brutal honesty but it takes a certain mindframe to appreciate it. Lang Vo’s beats help bridge the gap. The dirty bass of the title track allows Alaska to “rock the bells” in a whole new way. The techno-electronic “Fortified Live” is an indirect tribute to Reflection Eternal thanks to a punchline that’s repeated in the song’s hook, but sounds more like it would be at home on a Deltron 3030 album. “Godhead” strips things down to a minimalistic landscape inspired by 1980’s era hip-hop with a more modern reference to Jay-Z (or perhaps T.I. if you think of a song that sampled him instead). “I’m just too old for this bulls–t,” spits Alaska. Aren’t we all bro?

“Soul Music for the Soulless” isn’t a cheerful or happy album. It’s not music to get your ass up in the club. It’s not filled with nostalgic samples from R&B and jazz classics of yesteryear, or even hip-hop samples of recent year, but it is filled with intelligent rappers and hard hitting bottom beats that punctuate the acerbic verbals. This is the angry rapper Alaska we all need and not that other one.