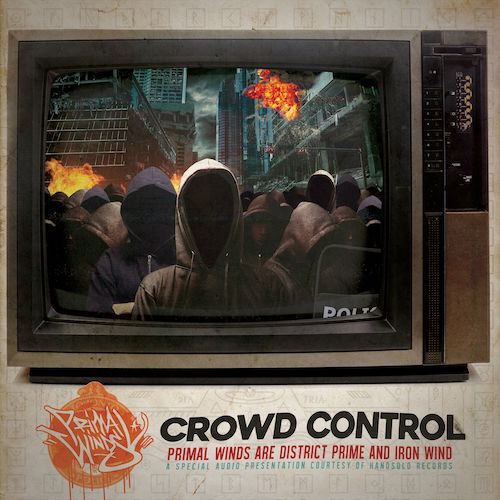 This is not our first go around with Primal Winds, or even our second. If you count Prime as a solo artist, it would actually be our fourth. That puts this duo (Iron Wind is the other half) in the unique territory of being both well established and still somewhat obscure. How does that work? Simple — they’re underground. The Toronto twosome is not signed to Def Jam, Interscope or Atlantic Records. They’re with Hand’Solo Records, a small imprint fighting the good fight against the overwhelming might of the corporate music landscape. There’s a little bit of “root for the underdog” when I learn that Hand’Solo dropped another release, but if they weren’t dropping good music there wouldn’t be nearly as much to root for.

“Crowd Control” might be their heaviest album to date. While previous releases have dabbled in themes ranging from “cowboy” to “sci-fi” this album embraces an industrial, electronic, in your face attitude exemplified by songs like “Wet Works.” If you want to test a new set of subwoofers in your car this song would be a good place to start. “Bringing the noise, causing a ruckus” is not just a rhyme here — it’s their full on intent. It feels like being in a crowded arcade, only every video game is the same and they are all perfectly in sync with each other.

I’m reluctant to say things that could be taken out of context (sometimes Hand’Solo grabs excerpts of my reviews for PR) but knowing that risk I’ll say that I get a Company Flow feel from songs like “Agenda.” It may be that so much time has passed since “Funcrusher Plus” that everything old is new again, but the scratching and the pounding beat definitely give me those vibes, as do the rapid fire El Producto and Bigg Jus style bars. Now before the hype train goes off the rails here I am NOT saying they are the new CoFlow. They are Primal Winds and uniquely their own thing, and “Crowd Control” will not be mistaken for a Rawkus release, but anything that even invites a comparison is a positive in my view.

The comparison also extends to the anti-establishment vibes of songs like “Lies” and “Conspiracy.” There was a very strong distrust of corporations, politicians and media conglomerates to CoFlow from the get go (somewhat ironic when you know who funded Rawkus) and on the latter track that feeling gets taken to “Behold a Pale Horse” levels. That’s right — they’re talking about harvesting embryos for selective breeding on alien spaceships. “At first they want you thinking it’s all a ruse” and “at this point it’s like a bad game of Sims” are the things I’d expect William Braunstein to say. I’m not implying they mean for you to take every bar seriously, but it’s certainly not being performed like it’s a parody of the paranoid.

If Hand’Solo Records didn’t already have an uphill climb going against the major media music monsters out there, “Crowd Control” won’t get them any closer to breaking through the mainstream paywall. Even songs like “A$$ Control” that play to the male gaze by talking about women twerking to the beat are set to an instrumental almost guaranteed NOT to get airplay in the club. Maybe a really progressive club? Not the type of club where women would take dollars in their G string, that’s for sure. “If she’s +Dirty Dancing+ I’m Patrick Swayze.” The sentiment is right but (and keep in mind I enjoy the song) I don’t see anyone going wild to this song except at their concert. It would be highly unlikely to ever hear it on the radio anywhere.

Perhaps the fact they have a song called “Won’t Back Down” that doesn’t once sample Tom Petty sums up Primal Winds best. The orchestral backdrop that leads up to the big bass drop is incredibly pleasant, and when that beat merges back to the strings it’s super dope. It’s easily the one song I’d put on a mixtape from this album if I had room for ONLY one, because it’s practically a gateway drug for “Crowd Control.” You need a hit of this before the rest of the album, because it’s still pretty intense, but definitely much less so than songs like “Target Acquired” or “What You Started.”

Obviously Hand’Solo Records is doing just fine given they keep on making music and bringing it to my attention. They sell enough units in a given year to pay the bills and keep coming back for more. That said I can’t help but wonder when you go this far out of your way to not be mainstream whether it hurts or helps your bottom line. Primal Winds will not be viewed as anything less than ruggedly DIY IDGAF by listeners of this album, but it won’t enlarge the sphere of their audience beyond the existing core either. If their goal is to flip a middle finger to everything commercial and make a rap album for people who might be ever-so-slightly elitist about what they listen to, there’s no doubt “Crowd Control” succeeds at that goal.