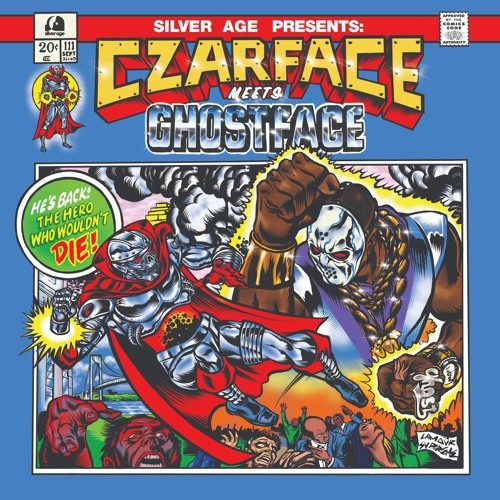 The “Czarface Meets Ghostface” release is the latest in an increasingly long series of albums dating back to their self-titled debut in 2013. “Debut” is perhaps not the apt word though given that 7L & Esoteric date back to the late 1990’s and Inspectah Deck is one of the founding members of the legendary Wu-Tang Clan. What was cemented in 2013 was the union of Esoteric and Deck on the bars with 7L on the boards as a new hip-hop super villain. Each Czarface album pulls together elements across a broad spectrum of rap and pop culture and fuses it together into a comic book that keeps you turning the pages. Their most recent album was ANOTHER collabo’ entitled “Czarface Meets Metal Face” which paired them up with the laconic MF DOOM.

Having found success with the formula of being a super villain that forms super groups, the trio again becomes a cuatro by reuniting Rebel INS with his old Wu-Tang compadre Ghostface Killah. The Czar-Keys (7L & Jeremy Page) provide the sonic landscape for the team up, and “Iron Claw” is an ideal example of all three rappers flexing to a heavy beat. “(You acting all BIG now!) But you ain’t Christopher Wallace” spits Ghost, who sounds increasingly (but not unpleasantly) like Cappadonna as he continues to age into a hip-hop elder statesman.

Conceptually this album could be dated back to 2014 when the same people involved recorded the track “Savagely Attack,” but here they’ve taken it to the literal full length by dropping a full 12 track album. Something accidental happened here though which I doubt any of the artists involved intended. By framing this release as “Czarface MEETS Ghostface” they were positioning it as a sequel to “Meets Metal Face” but in the process they imply that Czarface is a full unit and anything else is “tacked on” to their formula. They’re not wrong. Esoteric and Deck have become a perfect compliment to each other over the last half decade. They’re each intimately familiar with the comic book appeal of the crew, while in a wry twist of irony the original comic book Wu head seems like an afterthought in his appearances on this CD.

Let’s be perfectly clear that this in no way makes “Czarface Meets Ghostface” a bad album. You can definitely hear some classic Ghostface Killah storytelling bars on tracks like “Morning Ritual,” complete with his tendency to overshare details and make things a little TOO lyrically vivid. You’d swear RZA produced “Mongolian Beef” and Esoteric winds up sounding like a guest star on a Wu-Tang Clan song for this one. Deck is at his braggadocious best on “Powers and Stuff” then reminds listeners that he’s still “I’m wig splitting, and chopping heads quicker than true thugs” in case you forgot he was dangerous. “Super Soldier Serum” is classically dark and dank Czarface with a dirty and disturbing beat heavy on the bass that’s “deeper than Shaq Fu.”

Regrettably there’s not much I can share beyond “Iron Claw” since this doesn’t officially drop until February 15th and the label hasn’t chosen to release any other leaks from the album at the time of publication. Rest assured though true believes that this is a worthy addition to the Czarface catalogue that will find frequent rotation in your car stereo, boombox or headphones for the rest of 2019 AND beyond.