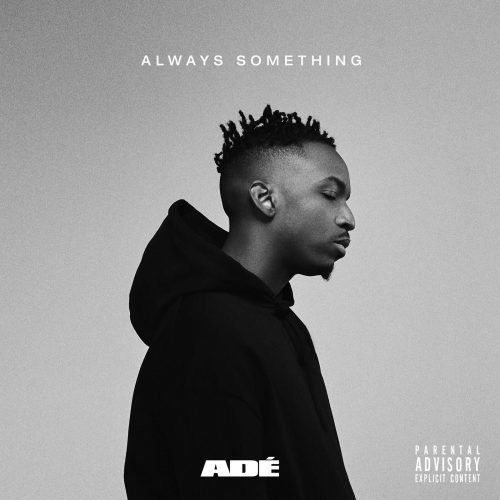 Formerly known as Phil Ade (with an accent on the E), our Silver Springs, Maryland rapper featured in this review decided to rebrand and repackage himself as simply Ade (again with that accent over the E). The timing to do so appears to be good as his HighRes imprint just landed distribution through Epic Records, with the “Always Something” EP being the first release to drop through the new partnership. Although press releases announcing albums and record label deals are a dime a dozen, the fact Ade inserted his own philosophical musings about “Always Something” into it helped it stand out from the crowd.

“As I was recording, I kept thinking about the phrase ‘Always Something’. I found a deeper meaning. In life, you’re met with negatives, and you’re met with positives. From my experience, I’ve always been able to have more peace and progress when I am focused on whatever good is going on in my life. When it seems like everything going on is negative, it’s easier to move forward when you are focused on the upside. There’s ‘Always Something’ to remain positive about.”

The raspy voiced Ade also caught me by surprise with his punchlines on the opening track “Play Something” including raps like “Niggaz tellin me Goku/me I’m Piccolo, I get to my green through these ProTrools” and “You couldn’t Style P if you was in a group with The LOX”. Even though the song is a snack sized two minutes long, it was a nice hors d’oeuvre preparing me for the 17 minutes to follow. With that much talent though I was a bit surprised to find Ade relying on so many guest stars on his EP — surprised and slightly disappointed by “Something New.” Despite the name neither Lil Baby nor the AutoTuned singing on the track are anything we haven’t heard before.

Ade’s not giving up on his “Something” theme scheme though, and he rebounds nicely from the second track on “Something From Nothin” featuring Rich The Kid. While it’s a mostly braggadocio boasting duet, the booming bass and slickness of their “Tokyo to Tennessee” toasting gives this song immediate whip appeal. I highly recommend it.

The rest of the EP maintains this base level of quality, though only “Something’s Up” allows Ade to shine on his own. There’s something to be said for rappers who sing their hooks without using AutoTune, because the track is charming without any enhancement. After that the guest stars take over the presentation again, from hip-hop’s perennial screaming hype man Fatman Scoop on “Something Sweet” to international crossover superstars GoldLink and Wale on “Something Real.”

If I’m being honest with you the major label connect Ade has here comes off a little heavy handed. He’s got the right beats but they are exactly the right beats. He’s got the right guests but they are exactly the right guests. As good as “Always Something” is I can’t shake the feeling that this is taking a regionally successful DMV rapper and repackaging him in a very manufactured and calculated way. I’m not saying that it has resulted in bad or unlistenable music, but you may find in time it becomes interchangeable with the very guest stars featured on it. That’s a shame really because on at least two of these tracks Ade proves he’s got star quality charisma WITHOUT all of the major label trappings and guaranteed to blow up cameos. Time will tell.