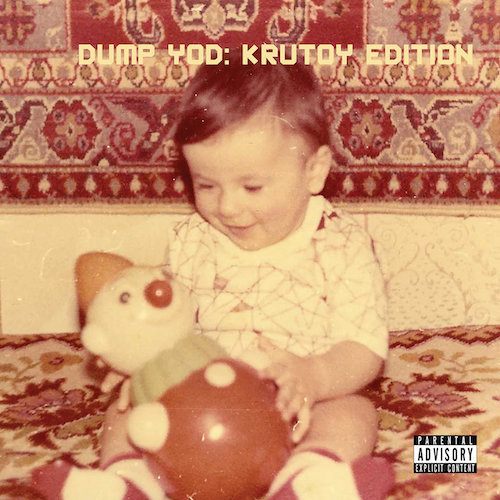 Due to some manufacturing delays, this list is smaller than I would have hoped. Most notably missing is Al. Divino and DJ Muggs’ “Kilogram”. Al.Divino is one of my favourite MCs at the moment, and I’m confident “Kilogram” would have made my list (I could be wrong and will find out) – expect a detailed review once it arrives to make up for it missing here. Some great 90s material appeared on wax this year – Gangsta Pat’s “Deadly Verses” was released through SIC Records and Page The Handgrenade’s “A Day in the Life: The 90s Demos” through Chopped Herring Records. Da Buze Bruvaz “Adebesi Hat” was given new, anti-social, offensive life in a stark “Recut” edition produced by Giallo Point, while Roc Marciano continued his penchant for surreal, slick boasts on the excellent Mt Marci: “I still own the elephant man’s bones/rare stones make my hands look like Thanos”. Aside from music, Nate Patrin’s book “Bring That Beat Back”, published by University of Minnesota Press was a readable and engaging history of sampling in hip-hop – I ended up with an index card covered with tracks I’d written down to follow up. Additionally, Chopped Herring Records’ “Interviews” book series, presented detailed oral histories from a roster of US artists from the well-known to obscure. 2020 also saw a large number of underground labels tap into the OBI strip craze – labels realizing with business savvy, that people are willing to pay an extra 25 EURO or 50 USD, for a limited-edition piece of paper attached to the otherwise standard (and cheaper) black vinyl editions.

It’s unfortunate to end this introduction on a sad note, but it was terrible to wake up on New Year’s Day and read about the death of MF DOOM. Like many others, DOOM’s music held an incredibly significant place in my life – from first hearing him through the “Madvillainy” project, to remembering buying the “Born Like This” cd when it first came out and getting excited by the seemingly too-contemporary reference to the Large Hadron Collider on “Gazzillion Ear”. Only last week I was playing “Operation:Greenbacks” at home and shaking my head to the brilliant clue-like line, “notice parables of three in every other inference”.

The following picks are in no particular order.

I’ve written about Lynn, Massachusetts MC Estee Nack’s intricate run-on style for Rap Reviews before. And, on “Baladas” Nack’s style runs relentlessly over 11 melodic boom-bap tracks produced by Superior, seemingly without many breaths, and hardly any hooks. I was convinced from the opening track “TELLTHETRUTHANDSHAMETHEDEVIL”, which features eerie organ hum and descending notes, and Nack delivering lines like “Nostradamus Doomsday clock bomb equip on the most prominent / dealing with the science / the genes are dominant”. Another highlight is “LAUNCHTHEBOATOFFAKEYWEST” in which Nack delivers the forceful “I ain’t waiting for that man to colonise” before blurring through impressionistic images including King Solomon, cars skidding, schooners skipping over waves and violent threats. Eto provides a standout feature on the eerie “AROCKANDAHARDPLACE”, and DanielSon swings “a butterfly knife/like it’s the Excalibur” on “POPROCKCLASSICS”. On “Baladas”, a record of “slum ballads”, Nack blurs through drug talk, social realism, gritty and decadent imagery – and perhaps a line that best encapsulates Nack’s combination of the intricate and blunt, and “Baladas” is: “put shit together like a seamstress / the pistol slowed you down like a promethazine trip”.

One of the few instrumental records to have caught my interest in the past few years – Russian producer LTF, has dug through Soviet-era jazz and funk records and remixed them into funk-heavy boom-bap. LTF makes great use of dub style echo and reverb effects across the release bringing Edan to mind, alongside drum patterns reminiscent of Damu the Fudgemunk. The first track, “Give the Horns Some” is a highlight – scattered drums and what sound like a drone-instrument’s bass notes reminiscent of spiritual jazz such as Alice Coltrane, switch into funk horns and a heavy drum break, complimented by clattering percussion and tight drum rolls. Look out for a longer, detailed review from me, including a brief detour into 20th Century Russian sci-fi in 2021!

After collaborating with Mach Hommy and Tha God Fahim on his most recent releases, Your Old Droog adds to their “Dump God” album series, with “Dump YOD: Krutoy Edition”. Droogs’s 2019 album “It Wasn’t Even Close” seemed to mark a pivot towards what he did best on his first, self-titled album – that is, a focus on rhyming – one which is in great form on Dump YOD. “Matryoshka” picks up from where “It Wasn’t Even Close’s” “Babuska” left off – demonstrating that Droog can “flow like Wrath of Kane” over Polka music, as if it’s the Apache breakbeat. Imitating its title, “Matryoshka” involves numerous beat changes, forming tracks nesting in tracks like Russian dolls. On “Dump YOD”, Droog draws on his Ukrainian and Jewish heritage, reflecting on the difficulties of being an immigrant on “Ukraine”, while rhyming in Russian on “Malchishka Krutoy”. It’s not all inwards looking – Droog is still weary of fans and ready to “backhand smack a stan to Kazakhstan” while levelling disses at unnamed weaker MCs. Take his word for it: “Droog is cantankerous”.

It was difficult for me to decide between the polished “Pray for Paris” and Flygod Is an Awesome God 2, but I prefer Westside Gunn’s mixtape style records. There’s a rougher quality – less concern for creating a masterpiece, for what seems like a greater focus on just rapping over beats. Stove God Cooks is one reason for this record making my list. Cooks “is in a Tesla swervin” over chopped soul vocals on Jose Canseco (prod. Street Runner and Tarik Azzouz) before the track melts into “One More Hit”, which sees producer Denny La Flare drag the cheery soul vocals of Canseco, into deep, menacing warbles. Gunn starts the standout track, “One More Hit” in a violent tone, “Yo, I walked up on em’/didn’t think I just shot”, and, following the sound of a gas burner clicking into a flame, Stove God Cooks, moves through blasphemous drug-talk: “Stove Jesus, I was cooking for three days/and then it rose from out the pot”. “Drive By Love” featuring Keisha Plum has boring sex rhymes, but Westside and Plum make up for it on “Rebirth” – Gunn flipping into a Ghostface Killah-style of rapid close rhymes, while “Plum Pyro” calmly delivers spoken word poetry threats to burn people’s houses down.

Playing in a similarly sombre mood as his brilliant “Honour Killed the Samurai”, Ka uses the religious tale of Able and Cain, to reflect on the trauma of the crack era. Produced in the usual spare style of earlier records, Ka weaves together intricate metaphors and stories, rewarding re-listens. When I describe the record as sombre, I don’t only refer to the sad circumstances recounted, but the mood Ka cultivates – one which creates a listening experience which demands serious attention. Rhyming in his understated style, Ka strings traumatic lines together, leaving each one to sink in like a stone, until by the end, the listener feels weighed down by his portrait of a stifling, cold world of police abuse, crack-dealing and violence. Especially striking is the straight-forward manner in which Ka delivers devastating lines such as, “funny how I used to call friends money/I lost hundreds”, or “It’s hard to say, every sentence is pain/brothers killing brothers/descendants of Cain”. A dark and beautiful album, which stands as a highlight from one of the most poetic, poignant lyricists working today.