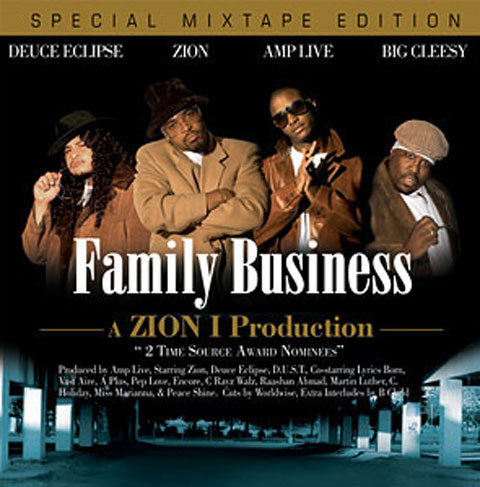 It’s really quite amazing how much hip-hop has grown and expanded in the last few years. Thankfully, this expansion isn’t restricted to commercial hip-hop music and has also allowed more underground acts to reach a wider audience. The college radio circuit in particular has been an important resource for artists whose music doesn’t fit the format of your average “hip-hop” radio station. I was first exposed to Zion I as a DJ and music director at a college radio station. While attempting to clean up the mess left by the previous director, I came across a few CDs that had been overlooked and never found their way into the studio. Among them was Zion I’s debut “Mind Over Matter,” and being the fiend for music that I am I popped it into my discman and gave it a listen. The CD found its way into my collection, but I never really gave Zion I a second thought after that. The music was good, but I figured that if a group from Oakland, CA had to reach out to a college DJ in the middle of the boondocks for fans then they probably weren’t going to last long in the game.

Fast forward over four years and Zion I has more than shown that they are here to stay. Since their debut they have released a critically acclaimed second album and are set to drop “True and Living” sometime in 2005. This mixtape is being released mainly to hold their fans over until their official albums finds its way onto store shelves.

The first thing you will notice when listening to “Family Business” is that its not what you would expect from a typical street mixtape, which is a very good thing considering the over-saturated mixtape scene today. Zion I do not resort to the over-used jacking for beats concept that you find on a lot of mixtapes, but instead give us 40 minutes of original music. The CD is short by current standards, but definitely takes a quality over quantity approach. Stand-out tracks include the single “Act Right” featuring newcomer Miss Mariana and Encore. The music on this track sounds more like a smooth and upbeat R&B track, but provides the perfect background for the MC’s. All three MC’s come correct and relate their experiences in this music industry:

“I went from M-town hero
To touring the globe’s four corners with Hiero’s
Still looking for my dough, never mind blow or the sign show
I’m running out time, my seed don’t give a fuck that I’m cold
I’ve been through the whole nine, wine and dined
Told I’d get it popping in time, along the dotted line
I took my shot with these lines, the irons unkind
Lied to myself just to find being unsigned
Or how bout signed without one dime”

“Oxygen” is another track that is worth noting as we find Zion I letting us know just how hard it is to deal with life sometimes. It actually sounds like the underground version of Fabolous’ current single “Breathe” right down to the sped up sample in the back ground saying “let me breathe.” These two tracks almost make the mixtape worth a purchase by themselves, but the rest of the tracks are also on point musically and lyrically. The music overall can be best described as head-nodding beats that emphasize the drums and allow the MC’s to shine without distractions. On a few tracks Zion I experiment with a more minimalist and bass-heavy approach to the beats, almost devoid of any real melody, but it works well with the mixtape’s emphasis on the lyrics.

“Family Business” will definitely please long time fans of Zion I, but it may not be the best introduction to the crew for those not familiar with them. The biggest flaw in the CD is the subject matter, which by no means brings down the quality of the music but could misrepresent the group to new fans. On “Family Business” Zion I devote a significant amount of time (and rightfully so) to their reflections on their years in the music industry and the problems they have faced. They also make sure to let their fans know that they’ve kept it real all these years. The problem with this is that new fans, who never heard Zion I before, don’t know that the group has rightfully earned a few bragging rights. On some of the tracks, the group lacks the freshness and edge it possesses when addressing more political or complex subjects. While more than competent as MC’s, Zion I’s appeal is drawn more from their vibe and willingness to address social issues. When rhyming about the industry or “keeping it real,” Zion I doesn’t sound any different than the countless groups who address the same topics. It would be a shame for people to write off Zion I as another underground group that is so concerned with “keeping it real” and the industry that they don’t say much overall. That is definitely not the case.

For those hip-hop fans looking for something fresh and different, I would recommend either picking up any of Zion I’s previous efforts or waiting until “True and Living” is released before forming an opinion of the group. “Family Business” is a good sampler for current fans and will definitely hold them over until 2005 comes around, but a group like Zion I is most effective and best conveys their message over the course of an entire album.