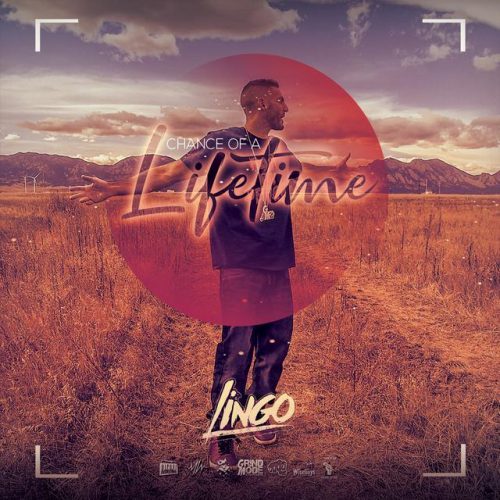 Lingo :: Chance of a Lifetime

Hip-hop lyricism has its roots in improvisation. At its inception, the emcee began by rhyming chants to the rhythm of his DJ’s looped break beat. Then it developed into freestyle battles, contests between emcees taking turns throwing rhymed insults at one another. The key to win these battles was dependent on their skills in rhyming, wordplay, and the quickness of their wit. Since those times, freestyle battles have become performed with less of the stream-of-consciousness aspect because emcees have been coming prepared with pre-written memorized lines. While many of these lines and verses are dope, it’s evident that they weren’t thought of right then and there on the spot. One prominent feature of the freestyle battle that’s become more renown in the past several years is the cypher. It’s a contest, but one between a group of emcees with razor-sharp rhymes directed towards unseen opponents, not one another. The Grind Mode Cypher is one such contest, a weekly series of emcees of varying locations, skills, and popularity simply ripping mics apart.

The GMC is the brainchild of Rhode Island-based hip-hop artist Lingo (née Ryan Fletcher). A triple-threat hip-hop artist (he raps, produces, and engineers), Lingo has been involved in the battle circuit and making music since the early 2000s. His new album, “Chance of a Lifetime”, takes his fondness for multis mostly away from the cypher and into songs with levels of pensive thought. This type of thought is demonstrated on most of the tracks, even with his Grind Mode affiliates providing assists. Speaking of which, the Oskar Mike-produced “Downfall” features him and fellow Grind Mode/New England emcee AyoK rapping about those who are hopeful for their failure. The album’s title track is a similar, but more upbeat track and is also the first single. Produced by Don-P, Lingo spits some inspirational rhymes using his own experiences and come-up (“the world is yours whether or not you recognize / you gotta make the connection even through severed ties”):

“Small Wins” continues the thematic trend of inspiration in the face of insurmountable odds. However, even with Don-P’s polished beat, this song (along with the previous three) begins to sound like a manual for an underground rapper’s guide to success. This takes a much-welcome turn on the posse cut “5 Minutes”, produced by German producer Screwaholic. Featuring Buddhakai, Ian Taylor, Rozin Bars, & Arkus, the song takes a cue from Nas’ “One Mic” in that they only need a few minutes to drop some thought-provoking bars. Lingo gets conceptual on the synth guitar-driven “Déjà Vu”, spitting what amounts to lyrical warnings embedded with traces of the old adage “those who cannot remember the past are condemned to repeat it.” The next track makes me wish Screwaholic had more than just two beats included on the album as his are both the most rugged and the least polished. With “Blink of an Eye”, Screwaholic employs some gritty drums for Lingo, THR3AT, AyoK, J.A.I. Pera, ILL ZakieL to spit over:

As a rapper, Lingo is undeniably skilled. He can adapt his raspy flow over the beats provided and maintains his penchant for polysyllabic rhyme schemes and wordplay throughout. On the Epistra-produced “Breakthrough”, he displays a tongue-twisting double-time flow in certain portions of the first verse. One pivotal line in the song sums up the dilemma that many talented rappers experience, “to say it clever or dumb it down”. Personally, I think you should dumb down for someone – but only on the condition that they agree to smarten up. Among the tracks closing out the album are the upbeat celebratory Vherbal-produced “The Goodness”. The final two tracks, produced by 2Deep, are “Homicide” and “FUNeral”. The former is the Grind Mode-style Lingo that I’m most familiar with: The punchline-spitting mic-ripper. The latter has him taking lethal aim at those (including himself and the mass media) who find pleasure in distorting facts and mocking tragedies, culminating in facetiously putting the “fun” back in a “funeral.”

Upon getting word of Lingo releasing this record, I honestly was expecting the Grind Mode Cypher version of him I’ve grown accustomed to. However, “Chance of a Lifetime” shows that he is just as multi-faceted in how he composes his lyrics as he is as an emcee, beat-smith, and overall producer. Production-wise, the album’s songs have a gloss, for the most part, that should garner attention from the more musically-inclined. As an emcee, he’s a grizzled veteran whose contributions have earned him a place in the culture.