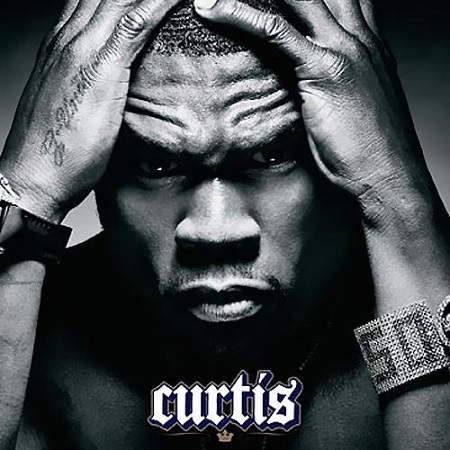 Hate it or love it. Curtis Jackson doesn’t care which, as long as you’re paying attention. For 50, it’s always been as much about the hustle as the music. This is the cause of both his massive success and the hate he receives from so-called hip hop purists. 50 Cent has solidified himself in the upper echelon of pop stars this decade with multi platinum selling albums, “Get Rich or Die Tryin'” and “The Massacre.” With all his success, the only question is whether 50 is still motivated enough to keep making albums full of hits.

“Curtis” delivers mixed results. While 50 does rehash the same formula of his last two albums, that’s not necessarily the problem. The issue here is the utter lack of energy that “Curtis” provides. This isn’t due to 50, who displays the same amount of wit he’s known for, but the production, which is uncharacteristically substandard. Usually, 50 is known for picking the best beats from unknown producers, but the selection here is full of imitation Eminem and Dr. Dre beats, which is puzzling, considering that he has access to those individuals.

Not all of the production is bad, but very little of it is anything remarkable. After the first three songs, the album picks up considerably, the grooves of “Amusement Park” presenting a nice contrast with the harder beats of songs like “Straight to the Bank,” while 50 adjusts well to both sides of the spectrum. Still, neither of those are particularly great, and as singles, they mark a decline in 50’s beat choices. Most of the songs here operate in between “average” to “above average,” which is a disappointment, considering 50’s budget.

That isn’t to say that “Curtis” doesn’t have its moments. Whenever the production is on, it breathes an even greater life into 50. Over the synthetic thump “Movin on Up,” 50 sounds as threatening as ever, ready again to tear your head off if you step up. In other places, the surprisingly club-ready Eminem beat (with an unsurprisingly awkward verse from the same), “Peep Show,” draws 50 out of his usual slow pace for a more up-tempo track. Best of all is the Apex-produced “I Get Money,” where 50’s swagger and wit work together for an instant hit: “I shipped quarter water, sold it in bottles for 2 bucks
Coca-Cola came and bought it for billions, what the fuck?
Have a baby by me, baby, be a millionaire
I’ll write the check before the baby comes
Who the fuck cares? I’m stanky rich
I’ma die trying to spend this shit!”

The sad thing about “Curtis” is that 50 is quietly turning in one of his better performances in spite of the disappointing performances of those around him. There is no dip in quality lyrically; 50 is often criticized for not being a good lyricist, but he’s exceptionally witty in his writtens. He’s consistent throughout the album, which is overlooked due to dull production. Not only that, but he manages to cover different themes very well, whether it’s his generic gangster posturing or playing with seduction on the softer “Follow My Lead”:

“You listen to the rumors, they say, “50 fuckin’ crazy”
“50 don’t know how to treat a lady.” They wrong
I like you a lot, I don’t want to hurt you
But I call a square a square and a circle a circle
So if you act like a bitch, I’ll call you a bitch
Then hang up, probably call you right back and shit
And have to say, “Baby, I apologize.”
Cross my fingers, God forgive me for telling lies
Like Janet Jackson said, “I miss you much”
I really want to feel your touch…”

Where “Curtis” doesn’t stand so tall is on collaborations. The stars are all here, but the combinations feel awkward and forced. Superstars like Justin Timberlake, Akon, and Eminem sound out of place beside him, while the above “Follow My Lead” severely under uses a Robin Thicke feature. Only Mary J. Blidge has enough personality to stand toe to toe with 50, on the surprisingly grateful “All of Me.”

All in all, “Curtis” is an album that will please his core fans, but might not reach out to the huge numbers of people his previous efforts have. It’s a solid performance, that is both better and worse than it could have been. It also operates solely within the box 50 has established for himself, both thematically and musically. Nonetheless, it’s far from a disappointment, and a worthy pickup for 50 fans and casual rap fans alike.