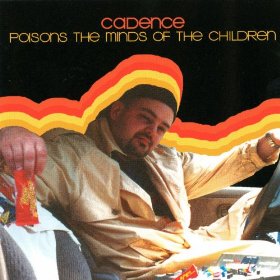 Cadence :: Poisons the Minds of the Children

Being a hip-hop head online can give you the oddest feeling sometimes. You know cats for years, you exchange messages and sometimes even trade tapes (or these days CD’s) with them, then suddenly out of nowhere they blow up large on the underground rap scene. When it comes to groups like Mountain Brothers and rapper/producers like Celph Titled, been there/done that. But even I didn’t smell this one coming, even though the Raw Produce was certainly fresh enough.

Let me back it up and explain. During the early-90’s when the newsgroup rec.music.hip-hop was growing, I was familiar with a struggling producer named “Pitch” who was a semi-regular on the usenet rap scene since even before that group was started. I got a couple of tapes with beats Pitch had been shopping around unsuccessfully, including remixes of songs by the Ultramagnetic MC’s and LeShaun (probably best known for her “Doin’ It” duet with LL Cool J). Highly impressed, I stayed in touch as best I could, always saying that one day he’d be large. Eventually I got a copy of his debut as one-half of the group Raw Produce, an album whimsically entitled “Sellin’ Celery to Make a Salary.” Keep in mind this is ’93-’94, nearly a decade ago. This impressive start was followed by the more critically acclaimed twelve inch “Cycles” b/w “Make a Mark” in 1995, which even garnered some underground radio play on the East coast. But since then, Pitch and his partner-in-crime Cadence could have fallen off the earth for all I knew. They might have been making shit but I wasn’t seeing or hearing it; and as often happens online the contacts you make vanish into the cyberstream.

Surprise! Out of nowhere Cadence returns in 2003 with a complete solo album, “Poisons the Mind of the Children.” Surprisingly he writes and produces the entire album for delf, although Pitch is credited for mastering the mix before the analog was laid to digital. The best part is that as nice as I thought the two were back in the day, Cadence is just as fresh now if not much fresher. “The Odds” is a perfect place to start. As the beat gently fades in, bringing a bassline closer and closer to the wavering backdrop and crispy drums, Cadence sets the tone for an earnest rhyme about trying to get ahead and make a living in an unforgiving world:

“I’m in a phase of humble beginnings but not despisin the days
I ride the wave hopin the next wall collapses before the crest falls
I’m sayin ‘Yes Yes Y’all’ to stress the start of my verses
Disperse this through underground channels while ladies fatten their purses
of mercy, rhythmic schism between flows and the beat of a drum reply
Living through words chosen to be coming from close to the heart
like ventricles, tangled in the tentacles
Servin my penance sentenced to life in the world of those unsensible
On principle I refuse to be defeated
I needed to meet the challenge head on, or else be dead on arrival
My survival represents the last testament against detriment
My will withstands through desperate times despite the world that’s testin it”

The verse serves to illustrate that Cadence is serious about his poetic craft, but also to showcase that his flow is lyrically dense and rapidly spit in a pattern that could best be called El-Producto meets Twista. His name is as apt as ever though, as the beat of his rhymes can be clearly felt and he displays the knack for never being off time on his own tracks. A self-produced rapper who can handle both skills well is rare enough, but to see one who exceeds and succeeds at both is rarer still. Cadence doesn’t forget to include humor in his mix and verbiage though, as shown on “An American Dream” when he scratches off a winning lottery jackpot and brags “I got more money than if I ran fifty-seven crack spots” and then scratches in a classic Audio Two line for the song’s hook. Then there’s the somber yet head-nodding “Always” where Cadence pledges his allegiance to being a great rap artist, the smoothed out duet “In the Pocket” with up-and-coming rapper Cee-Rock, and the not to be missed “I Am Myself (Remix)” featuring familiar underground sensation Mr. Lif.

What’s somewhat easy to miss about this album is that even though it’s clearly an underground rap record for heads who want that next level in beats and rhymes, it’s a surprisingly clean record. People often associate “clean” with “corny” these days, assuming that it’s a watered down version of the truth or some weak attempt to reach out to a mainstream audience. Nothing could be further from the truth though. Cadence doesn’t need a lot of “shit” and “motherfucker” to get your attention, just the kind of writing and music production you can find on symphonic and meaningful tracks like “The Mighty Pen”:

“This goes to all the hardheads thinkin that you might cause fright
The pen’s mightier, and I can write all night
I stand strong with long stanzas comin strapped from the hilt
Practically built an arsenal so while you’re rappin for guilt
you’re off-kilter now with the filtered now sound I’m tellin it
The handwritin is plain the way I’m spellin it
My rep is that I’ve never been lax, my syntax is to the letter
so I’m better when I get up in tracks
And in fact, you’ll find my content stands against the preponderance
of con-men, gettin on then spreadin their nonsense
I asked them, how they think their music can last
When it’s pretensed, before they become a part of the past tense”

You may not have heard of Cadence before now, but those lucky few who remember him from the early days will be pleased by ruggedly intelligent yet impressively boombastic tracks like “Teach” and “I Want to Talk to You” featuring Quite Nyce. My only regret in listening to Cadence’s solo album is that Pitch doesn’t play a more prominent role, but I’ll take things one release at a time and hope he drops one of his own. For now, “Poisons the Mind of the Children” may go down as the year’s most ironically titled rap album – because to an open-minded listener starving for fresh product, this LP will be more akin to ambrosia.