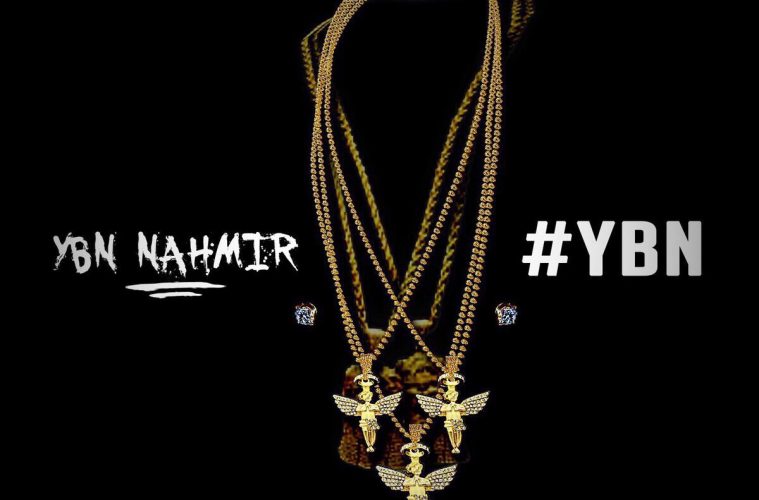 Let me introduce you to Nicholas Simmons b/k/a YBN Nahmir. At 19 years old there’s little doubt that the “Y” stands for “Young” but that hasn’t stopped him from quickly becoming a major factor musically. Two years ago Nahmir made a big splash on Soundcloud with the song “Rubbin Off the Paint“. Considering how many songs get uploaded every day (more like every SECOND) the chance of any one track going viral is nearly lottery ticket odds, but Nahmir hit that Powerball in a big way and promptly released the song in digital stores to cash in. Once the song charted on Billboard the Birmingham rapper’s career was off to the races.

Before we go any further let’s establish that YBN is also part of the YBN Collective, a crew that includes members like YBN Almighty Jay and YBN Cordae among others. Right now they’re in the position of being a rising tide that lifts all ships, so Nahmir’s success increases theirs as well. They are playing this game the smart way by using the hash tag “#YBN” to both reinforce their brand and promote Nahmir’s mixtape. This is the new hustle in 2019 — you build your brand online, and once you’ve cultivated that fan base you take it around the world. That’s what that “Y” is all about. There are a lot of people who unnecessarily hate today’s hip-hop artists because they use social media to build and their old asses never learned how.

Speaking of hatin’ it’s too easy to knock “rappers” who spend more time singing than rapping. YBN Nahmir isn’t one of those AutoTuned dudes though so you’re either going to be pleased to hear the news or think he’s out of touch with his own generation. The answer is just as likely to be neither of the above. Nahmir’s viral success is at least in part attributable to the fact he can FLOW. He doesn’t need gimmicks or sing-sung hooks. On tracks like “Applying Pressure” he’s spitting fast and with a flow as smooth as the middle part of Lil Wayne’s career:

“We the reason why there’s all these f—-n bodies (bodies)
Niggas shootin in the area and never caught a body
Nigga they jocking on my style, they wanna f—-n copy
Whole time, they baby momma want to come and f—-n top me
Niggas rappin about that shit that they don’t do
These boys Super Saiyan like they Goku”

On “Real Live” Nahmir also shows a versatility to his style by narrating a “rags to riches” story that goes beyond the cliched braggadocious raps about how fly he is and everybody else isn’t or how many bodies YBN can catch:

“Back then, that nigga clothes used to be Dixie
Laundromats, washin clothes for like three fifty
Sitting down, thinkin ’bout all the girls who used to hit me
Now, all shorty want to do is take a pick (take a pick)
A nigga started gettin chicken, now they on my dick (what’s that)
Challengers, got a trucks, I got two whips”

I think what strikes me the most about Nahmir is that “Rubbin Off the Paint” could easily have been a one hit wonder. Imagine you’re 17 years old, you just cashed that hip-hop lotto ticket, and went straight from studying algebra in high school to counting racks on racks on racks in your new crib. It would be easy to be complacent under those circumstances, maybe even party hard and blow it all, then go all the way back to square one with nothing to show for it. It may be too early in the YBN Collective’s history to say this but I FEEL like they are building something for the future here. I’m tempted to call what they are creating Odd Future 2.0 but I have to stop myself because part of what made OF viral was being WEIRD. They did strange things, made strange things, and then counted on Tyler to be their focal point to bring it all together. Nahmir is the focal point of YBN but he’s not doing artsy rap — he’s just down to Earth and firmly planted in the soil. Like a tree he’s only going to grow up and get bigger (and so will his crew).