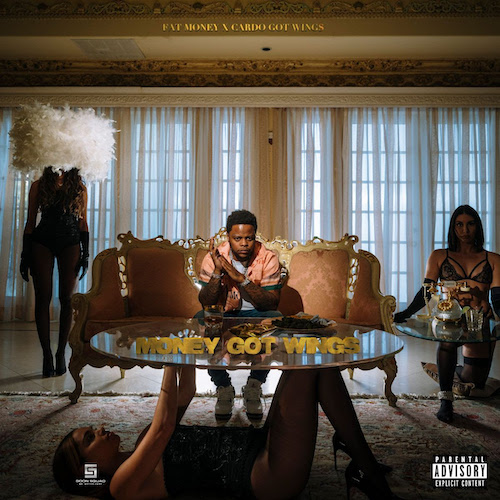 “The Cookie Monster get the last laugh when the cookie crumble
Damn I’m hatin this new age of rap, all they hooks be mumbled”

It’s easy to explain the name of “Money Got Wings” — it’s the combination of rapper Fat Money and producer Cardo Got Wings. The latter has been behind the scenes on some huge rap songs like ScHoolboy Q’s “That Part” and Drake’s “God’s Plan” to name two, while the former is an Illinois rapper formerly known as Ty Money. Honestly Fat Money has a more distinctive ring to it, and it also implies (as A.G. once said) he prefers his pockets fat and not flat. Whether we like it or not it’s part of the game to flaunt like you’re balling, even if you have to rent it for the video and return it later. Oh I’m sure Fat Money is paid for real — I’m not implying otherwise — I’m just saying it’s hard for anyone to break through being honest about how broke they are. He certainly flexes the stacks in “Bag From Hell.”

Fat Money doesn’t have that many videos though, and even his videos are samplers of multiple songs from his new album. Other than that he has what are called “visualizers” nowadays, which are basically an artist’s song set to a few seconds of video looped on repeat. It’s not a video per se, but it’s more animated than listening to the song on Spotify. Of course if you’ve got it playing in the background on your phone or your laptop it doesn’t really matter if there’s a “visual” or not, especially if you’re synced up to Bluetooth and got it hitting out of some nice speakers. It’s no coincidence that’s how I’m listening to “Old White Men” featuring Bump J as I write this.

“Have a seat, put your phone down, listen.” This is a tale of Fat Money talking about his come up (see that whole “fake it to make it” thing we just discussed) while issuing polite threats like “I would really hate to pistol whip him.” He’d rather rap for the dough but he’s not above getting it by any means necessary. Bump J accentuates the tale well by pointing out the mistakes of their enemies. “Don’t you find it ironic the bitch you was trying to cuff ended up tying you up?” I guess that’s his fly in the Chardonnay. One way or another dinero comes up a lot for Fat Money. “Enough with the rapping ’bout having shit” quips FM on “Back Innaraq,” apparently missing that he is also being ironic.

I’m giving him the business above but the truth is that Cardo and Fat Money are a good combination. The bass hits and understated instruments of “Accident” let FM spit clear bars, fast flows, and even AutoTune a lil’ bit. The nice thing is that he only uses it as an accent to his music, not relying on it for the entirety of a song and every word that he spits. His punchlines are appealing too: “If this was Juice, I’m playing Bishop, and all I see is a lot of Raheems.” Yeah that dates me but that also dates Fat Money too so we’re in the same demo… or he has good taste in movies. (Seriously — go watch that film right now if you’ve never seen it before.)

The biggest problem with “Money Got Wings” isn’t the subject matter or the production — it’s the length. At only 10 songs long for a combined total of 21 minutes, it feels like you’re just starting to enjoy the album when the proceedings come to an abrupt halt. I suppose leaving them wanting more isn’t a bad way to go out, but given that FM isn’t new to this but true to this and he’s working with an established producer, I really thought they’d hit me with a full course meal and not an appetizer. I can’t imagine Cardo comes cheap, nor that Fat Money wants to waste those old white men in his pockets, so why not get your money’s worth then? Oh well. His bars show he’s got skills, so if he diversifies his topics a little and keeps working with big name beat makers, he’ll keep those pockets on swoll.