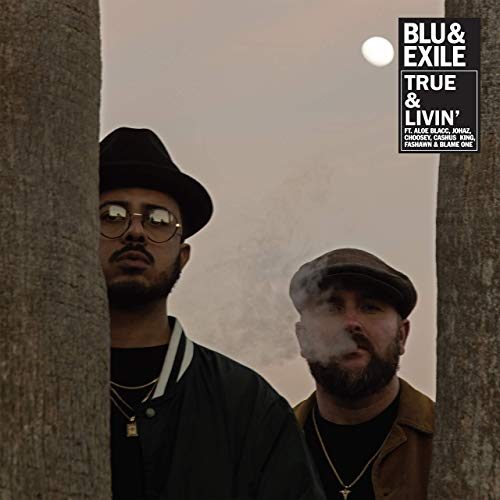 The hip-hop tandem Blu & Exile has long been spoken of in reverent tones amongst the crowds packed tightly into small nightclubs on the night “Cult Favorite Rapper” arrives on tour with “Local Aspiring Emcee” opening for them and “Your Urban Station Deejay” giving away free tickets to the show. The mixed drinks are overpriced and watered down. The air is danker than memes with the smell of weed. Children of the golden era mingle with children born the same year “Enter the Wu-Tang” came out. No one asks if the greatest was Biggie, Jay-Z or Nas — but you’ll hear Pharoahe Monch, Aceyalone, Ghostface and Illogic brought up. Wannabe backpackers, die hard hip-hop heads and young’uns looking to impress the old heads do the knowledge like it’s hip-hop college. Inevitably an album like “Below the Heavens” will come up because it’s just that kind of crowd.

That kind of admiration guarantees a mandatory minimum amount of sales for any project both men are involved in, though the versatile Blu has proven capable of rapping and producing for dolo while Exile lends his production talent to any worthy emcee who can also meet his price while occasionally dropping bars. As great as they are separately, there seems to be a special magic in the meeting of the minds between the two. It may simply be that they are kindred souls given Blu hails from Inglewood and Exile from L.A., but there’s a vibe to the union that draws loving comparisons to Premier & Guru or Pete Rock & CL Smooth.

Pressure to produce classics that great can either bust pipes or create diamonds. I’ll argue the “True & Livin’” EP does the latter. True to the extended play format this one is not overlong, although at 32 minutes and change it certainly exceeds the length of many free mixtapes. On the other hand one must acknowledge there are only three new songs here, met with three instrumentals for each, plus a clean version of “Power to the People” and an acapella for said same. That’s fine though. Exile’s production on songs like the titular track is good enough to listen to with or without bars.

“Uh, turntables and a classic record, a match made in +Heaven+
Glory be to God, straight out the West it’s never been
a more truthful duo, in these courageous ages
The new creator’s favorites, yo, it’s Blu & Ex
Go get a stack of rappers, and play us back to back
Check the conclusion after – who got the masses locked?”

The answer is clear. The most striking track may be “Power to the People” though given it’s the kind of posse track that will be discussed in those same aforementioned smoky night clubs. Everyone always wants to argue which collaboration is the best, but the lineup of guests including Fashawn, Aloe Blacc, Choosey, Johaz, Cashus King & Blame One is arguably among consideration in the debate. It might not be so clear this is among the “best of the best” were it not for the fact this track is a political polemic worthy of the golden era classic “Self Destruction”. Let me be blunt — the whole song is one big middle finger to Donald Trump, crooked cops and the alt-right.

So can you call any EP a classic when there’s only three new songs on it? That will be another debate for the millenials, the white haired relics of the Treacherous Three era, and everyone else who falls in between. This is just one man’s opinion but I’ll stand firm by it — a whole album of tracks like the previous two plus “Spread Sunshine” would be a 10 out of 10. I’m not inclined to downgrade it just because they decided to choose quality over quantity. I’d rather have more but “True & Livin’” has enough the way it is.