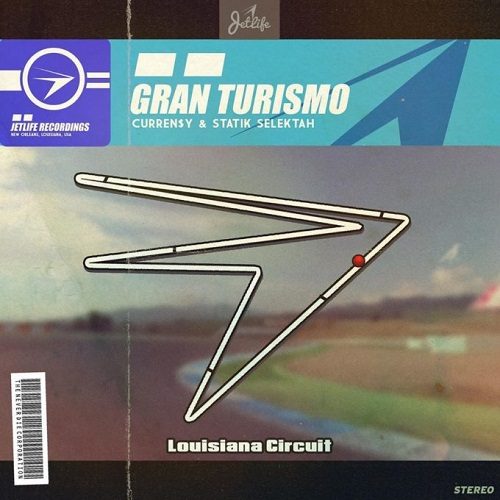 The mere mention of “Gran Turismo”, Sony’s famous videogame series dedicated to petrolheads, brings back memories of late nights spent earning licenses. Driving on bowl-tracks with an underpowered family hatchback, occasionally tapping left on the controller while some British indie band plays. Great games, but they were huge time sinks, almost the equivalent of an epic Japanese role-playing-game without the nerdy tropes often associated with games back in the late 1990s. Gran Turismo was almost fashionable, comparing garages before the likes of Forza ensured there was a fun game to play too for those not completely infatuated with tire depth and transmission types.

An obsession with automobiles is not new to hip hop either, just watch any rap video from, well, ever. Cars are great, what can I say. Known more for his drug habits than his driving, Curren$y recently delivered this 27-minute record produced by the ever-reliable Statik Selektah. It’s short, challenging the very notion of LP, and I’ve probably raced laps on Gran Turismo 3 longer than this album. But the saying rings true, quality over quantity, and after being underwhelmed by some of Statik’s previous albums, this was a pleasant return to form.

The single “Friend or Foe” is melancholic, not dissimilar to fellow pothead Devin the Dude’s work, and Curren$y’s horizontal tone suits it perfectly.

Years ago, “Gran Turismo” would have been a mixtape bulked up with some skits and scratching, but Statik Selektah’s production here is levels above that. After establishing his sound with slapping snares and swift scratches, Statik’s noticeably stepped up his game with some really dope beats here. The LOX lend Sheek’s vocal to “Clear (Part 2)” and Jadakiss joins Curren$y for some game-spitting, but good Lord, the kicks on here will leave your ribs shaking!

Curren$y has always shown a lyrical side that can get overshadowed by his obnoxious moments, but he doesn’t get the chance to outstay his welcome. Jim Jones drops a suspect line (“I’m bustin’ on these n****s like I’m masturbating”) but otherwise does his thing on “At Night”, another standout production. Keeping the tracks short benefits Curren$y but also means he doesn’t get to fully absorb the listener with his tales of exorbitance. The polished approach to the beats also shows surprising depth, which when coupled with the vivid colors of the visuals for singles like “Theme Music” combine the luxurious aesthetic of current favorites like Gibbs or Gunn with the traditional kicks and snares of yesteryear.

Curren$y has often flirted with mainstream success, as have his guests Jadakiss, Jim Jones and even Termanology (Term and Statik worked on Grand Theft Auto IV, don’t forget). But with no disrespect to the emcees, “Gran Turismo” is Statik reminding you not to overlook him or his craft, because he’s switched gears and starting to pull away from any rivals.