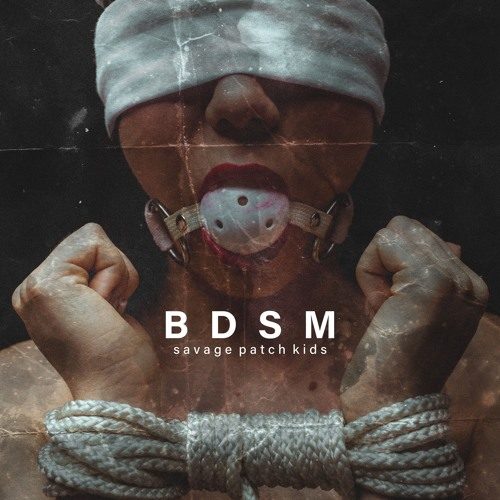 My initial look at both the title and the debut album cover for the South Florida hip-hop trio known as the Savage Patch Kids (SPK) brought one thing to mind. Though the title, “B.D.S.M.” (which stands for ‘Being Dead Sounds Magnificent’), is superimposed over a blindfolded & bound woman with a ball gag in her mouth, neither one elicited anything even remotely sexual. No, what came to mind from those two factors was a quote from Irish Playwright George Bernard Shaw: “The secret of success is to offend the greatest number of people”. One of the most notable figures for whom that notion worked well was rapper Pusha T, as the cover of his 2018 album “Daytona” was a photograph of the drug-addled bathroom of the late singer Whitney Houston. Though SPK is significantly lesser known than King Push, they appear to have adopted Mr. Shaw’s quote and run with as well. However, the music isn’t offensive. Well, it’s not offensive to listeners who enjoy boom-bap style beats and no cookie-cutter lyrics, is what I mean. Though the cover may offend some people, it’s actually a reflection of the style of SPK: Hardcore hip-hop.

Russian producer Chiveer laces five of the nine tracks, and he’s the beatmaker who sets the musical tone for the album. His hardcore aesthetic when it comes to creating hard menacing beats from mere piano or guitar samples meshes well with SPK. The trio (made up of group leader Mass Hollow, the gravel-voiced Drone Phonetik, and the J-Swift influenced 6 Cardinal) are just as capable of rapping braggadocio rhymes as they are about poignant rhymes. On the Shawn Wayne-produced “A Dick Shin”, each member waxes lyrical about their own respective issues with substance abuse. Another track of substance (no pun intended), which Mr. Wayne also produced, was “Y2K”, a blistering attack (particularly from Drone) about the manner in which technology is being used and how it prohibits meaningful interactions with people. The song even has a sample of the familiar America Online dial-up sound to start it off. The one song that’s lighthearted in comparison to the preceding tracks is the album closer, “Old Fashioned”. Produced by blockbaybeats, it has light piano keys sampled over a slightly sped-up smoky jazz room-sounding backdrop.

The opening track, “Safe Word”, reflects the hardcore connotations of the album cover and title in name only. However, it IS hardcore in the sense that the music and lyrics are aggressive and confrontational for the most part. The album’s lead single, “Keep It Street”, also is similar thematically. Both are produced by Chiveer, and the latter is more dark and ominous. But the way each emcee uses their respective flows and lyrics to rip apart the beat is noteworthy as well:

In their rap styles and their choice of productions for this album, the Savage Patch Kids have a clear influence from the vaunted hip-hop eras of yesteryear. If not for their shoutouts to their home state of Florida, I would’ve thought they were from the New York City region, given their sound. Though only nine tracks in length, “B.D.S.M.” has social commentary, boom-bap beats, battle rhymes, and personal lyrics all wrapped up in nicely fitting hardcore package that’s bound to please any real hip-hop fan.