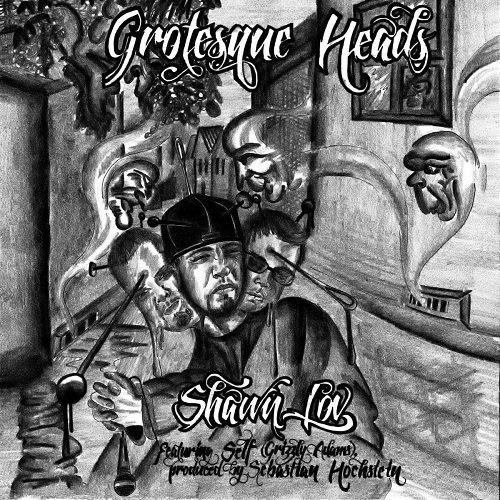 Although he’s been releasing albums since 1994 (THIRTEEN of them), I’d never heard the name Shawn Lov until recent years when he dropped a couple albums on Nuffsaid Records, one of the best known underground hip hop labels here in Australia. Aside from being aware of the fact those albums were in existence I never felt inclined to check them out, so his new self-released Bandcamp album “Grotesque Heads” is my first dose of Shawn Lov.

I have to say I feel like I’ve stepped into a time machine with this album, which isn’t generally a bad thing in my books, but one aspect in particular leaves me feeling more like I’m being dragged into that time machine against my will. Being of “mature age” myself, I’m often guilty of romanticising over the golden era and wanting to re-live my younger days by seeking out that “back in the day” feel in my hip hop, but Shawn Lov has an element of throwback which is quite bizarre for the hip hop world as it stands today – his own focus on being a white rapper.

I’d like to think I’m not wrong in stating that the days of being a white MC are no longer a novelty or much of an issue, to the point that the majority (if not all) of white rappers these days don’t even mention the fact. For comparison, it just so happens that lately I’ve been listening to albums by Ugly Heroes (two white guys and Apollo Brown), Esoteric and another white MC from Boston called Effect – none of them utters a word about their skin colour. However, listening to some of Shawn’s raps take me back to a time where the likes of 3rd Bass, Vanilla Ice and the Young Black Teenagers were all looking for the answer to the “How can I be down?” question in the predominantly Afro-American and Latino hip hop culture. Not that Shawn is actually putting on any sort of front or campaign for acceptance, but the fact he is making references to MC Serch, Mike D, Vanilla Ice and others strikes me as something not particularly relevant or necessary in the current era. Listeners from the 3rd Bass generation would likely be feeling a confused sense of déjà-vu, and the younger heads that grew up on Eminem, Non Phixion, The Demigods, Vinnie Paz etc. would probably be thinking “umm ok you’re white and you’re a rapper … so what?”. Yes it’s very likely that Shawn would have had struggles to be accepted in the hip hop scene back in the early 90’s, and you could probably argue that it’s something that today’s generation need to know about to better appreciate how diverse hip hop has become, but it is a strange stance to adopt on a 2013 release. It’s as much a non-concern in hip hop now as having an R&B singer perform the chorus on a track, which used to incite accusations of selling out and being “soft”, but in the present day it hardly raises an eyebrow and is pretty much an accepted part of our genre (for better or worse is another story for another day).

“White” is THE word on at least half the album’s songs. The intro “Grotesque Heads” mentions “white MC’s are still nuts when their prescription for riddlin’ is smoking a bong”. The first full track “O.G. Fantastic” sees Shawn continuing this, with lines like:

“Before it was the rage
I was first known white carrier of the ebonic plague
They tested Mike D, Eminem and MC Serch blood
But there’s still traces of my megaliths before the first flood
[…]
Ain’t no real rappers specialise in I.T. bro
Rich kids with no identity ain’t grimy ho
Ain’t no white peeps in the suburbs with an Ice-T flow
I refuse to believe them”

Similarly, his tribute to his home turf of New Jersey called “Jersey Crack” not only makes the expected shout outs to NJ legends like Redman and Naughty By Nature, but he also calls out wack rappers in relation to Vanilla Ice and MC Serch. “Livin’ a Lie” has Shawn telling us he’s been “Banging since Chuck D had to tell white people this is not noise”. We also get the line “crackers busy biting crackers like me” in “Hip Hop Withdrawl”. Coming from another perspective on whiteness, “That White Boy Shit” actually speaks on white stereotypes and is a message out to the likes of Pharrell and Lil’ Wayne taking on supposedly white pursuits like skateboarding.

I do get where Shawn is coming from with some of his statements, but I can’t pretend that I wasn’t VERY surprised to hear a rapper coming from that angle in this era. It’s bemusing and somewhat irritating, as it drags the album down for me.

If you can overlook his antiquated themes you’ll notice that Shawn does have a pretty decent flow, which has obviously been honed nicely over his many years of practising his craft. However, his voice can get annoyingly whiney when he gets more animated in his rhymes, which tends to make him sound rather more teenaged than his 36 years on the planet. The main modus operandi of his rhyming is the state of hip hop/keeping it real and battle rapping. His weapon of choice for those battles is his veteran status as he often throws out “I’ve been doing XYZ since the 90’s and you haven’t” daggers at his competitors; daggers which start to feel blunt after a while. The final track “Cee Inside” is a track where he gets a bit deeper; talking about people being misled, misunderstood and lacking knowledge, but it’s also the weakest track musically with a lame half-sung chorus that’s harmonized by Shawn and a female singer, and sounds rather contrived compared to ego wielding rhymes on the rest of the album.

Definitely adding a lot more appeal to what Shawn is doing though are the beats provided by German producer Sebastian Hochstein. The producer from Deutschland undoubtedly would have grown up on a healthy diet of Diamond D, Showbiz and co. in the 90’s, as his mid tempo beats with their crisp hi hats, snappy snares, intermittent horn stabs and addictive basslines are all very much of that ilk. “Another Level” being an example where Shawn’s flow gels nicely with the Hochstein head-nod fest (featuring Self AKA Grizzly Adams, who appears on a few tracks on the album).

“Jersey Crack” feels quite similar instrumentally, with the bonus of a bassline so catchy and prominent, that its sounds like there’s a double bass player live in the room with you as the song plays. In fact, a few of the instrumentals provided by Hochstein are so good, that if they were made by the well known producers of the 90’s and released in that same era they’d probably come close to being timeless hip hop standards. Falling into this category are two lively tracks in “Livin a Lie” and “Light It Up”, and the mellower “Hip Hop Withdrawl”, with its breezy chimes, is a track that could have been on an old O.C. or Boogiemonsters record.

Musically, the majority of the tracks are essentially derivations from “Another Level”, with alteration in tempo and/or greater or less emphasis on one of the aforementioned musical components, but there are a couple tracks within this very short ten track album that change up the sound. “That White Boy Shit” is a much faster and rougher track, with an up-tempo feel reminiscent of the more hyper tracks from Ice-T in his hey day. Whereas “The Devil’s Tricknowledgy” leans towards the bouncy funk that DJ Muggs blessed the likes of Cypress Hill and Funkdoobiest with (the latter get sampled on the track). Speaking of “devils”, it’s another buzzword of Shawn’s on the album, and once again it represents vocab that is a relic from a bygone era in hip hop but is curiously resurrected on this album.

The hype on Shawn’s website for the album states that it is: “grounded in the 90’s, but transcending eras to meet new listeners with a flavor that is both reflective and progressive”. To me it’s far more than just “grounded in the 90’s”, it is entrenched in the era and on every level feels like it was released IN the 90’s; I really can’t see where the progression is (unless the concept of progress here is moving hip hop back to bring it forward?). The album is bathed in golden era hip hop; Shawn’s lyrics, the beats, the DJ work on many of the tracks and the constant references to artists of the era such as MC Trouble, Fu-Schnickens , Slick Rick, Poor Righteous Teachers, Trouble T-Roy etc. etc. Maybe Shawn is simply making music for his peer group, and if that’s the case I suppose he’s succeeded. I am that peer group though and his whole retro schtick should and normally does appeal to me, but Shawn seems like he never left the days when he first started in hip hop and I can’t help feeling boredom, and at times bewilderment with his lyrical approach. Play this one for the impressive production and DJ work instead, or maybe just pretend you’re listening to an unreleased album from 20 years ago.