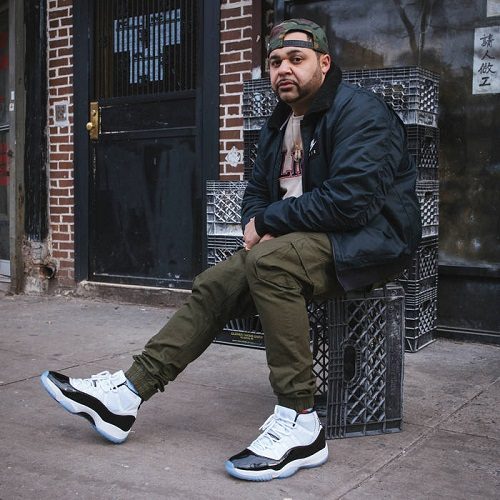 Mello Music Group may not have seemed the natural home for Joell Ortiz given the Brooklyn rapper’s history of major label recordings, yet last year’s “Mona Lisa” record alongside production wizard Apollo Brown was the perfect match. Joell had flirted with greatness, whether solo or alongside his Slaughterhouse comrades, yet deciding to rhyme over one producer’s production gave him a new lease of life. Not only did he sound refreshed, but he looked energized and happier in videos and interviews.

Apollo returns for a couple of tracks (“Sip Slow” and “Same Time”) but production duties are shared amongst Nottz, J.U.S.T.I.C.E. League, Hesami and The Heatmakerz. Yes, them of Cam’ron and Dipset fame. It shouldn’t come as a surprise given they released a record with Joell Ortiz and Fred the Godson earlier this year – it kind of went under the radar.

The single “Before Hip Hop” reminds us of Joell’s struggle before he arrived on the music scene (his debut single being “Hip Hop”). Dealing drugs, playing dice and having bought a “nine to get live” because he was “too lazy for a 9-to-5” is the brash side of Joell that we are familiar with, but it’s the personal tracks that pique my interest. “Anxiety” is, quite honestly, one of the most innovative tracks that has been released in a long time. Self-doubt over image and weight prey on his mind, something many of us can relate to, but in an industry where artists are judged by labels and executives on their “visual brand”, it’s refreshing to hear. The chorus itself plays out Joell literally having an anxiety attack:

One of Joell’s qualities is his down-to-earth nature and “Monday” is built around the, ahem, everyday struggles. Another song that caught my attention is “Screens”, which is a damning father’s disbelief at the amount of screentime youngsters spend staring at videogames and cellphones. There is a lot of truth in the rhymes but it’s also something your grandpa would say, with Joell sharing his own childhood activities, yet conveniently overlooking the videogames prevalent throughout the 1980s and 1990s. The thing is, all the mentions of “tag” and “manhunt” are something children still do (your 6-10 year olds); especially in the playground; but Joell reckons they are playing Call of Duty. If anything, they are playing Minecraft or Fortnite and if they are playing Call of Duty at an age where they should be climbing trees outside, that’s a parenting issue rather than a societal one. But I’ve daughters, not sons, so it may well be different.

Big K.R.I.T. lends his vocals to “Learn You”, a track that sees Joell talking directly to his sons about the regret he feels when he wasn’t around in their younger years, and the wish to learn more about them. There’s the harrowing reality of prison and coming to terms with the mechanics of inmate life, on “Same Time”. The disinterest in industry awards on “Grammy” as glorified popularity contests mean little when Joell’s career has surpassed any expectations he’d had since his days of “watching Tom & Jerry on the floor next to a mousehole”. It’s a dense album, scattered with excellent writing and more often than not, the production backs it up.

Much like his Slaughterhouse colleague Royce, bars aren’t an issue and never have been, but it’s his most vulnerable work that leaves that lasting impression. With “Screens”, “Anxiety” and “Learn You” showcasing Joell’s strength in writing songs with unique, powerful messages, “Monday” shows that the refreshed Joell is a force to be reckoned with. If he continues at this rate, he may well gift us the classic his career deserves.