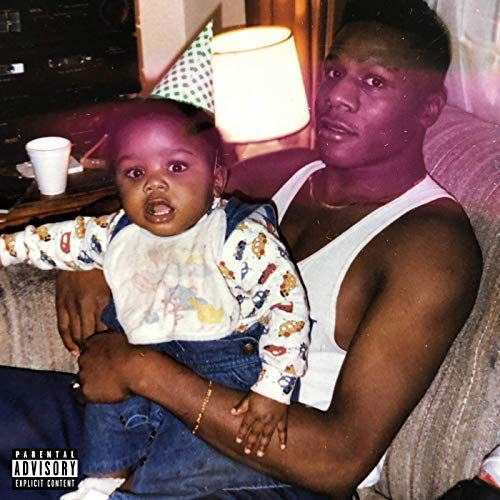 Our condolences to Jonathan Lyndale Kirk b/k/a DaBaby on the passing of his father shortly before he dropped “KIRK“. The album’s cover is a picture of DaBaby sitting on his father’s lap back when he was a baby, so it would be impossible to start the review without mentioning it and paying our respects to him and his family.

Although DaBaby (also known for a time as Baby Jesus) originally hails from Cleveland, he spent most of his formative years in Charlotte, North Carolina and that’s where he’s billed from. As you might expect from the inclusion of a song called “XXL”, the 27-year old was part of the magazine’s “Freshman Class” this year, even though he’s been part of the recording industry dating back to 2015.

Perhaps even more appropriate though is the album’s first single “Intro”. Normally an “intro” is a throwaway to open an album — a popular mixtape DJ shouting someone out, a skit that’s not a song, or the artist saying a few words like “welcome to my new album.” In this case the “Intro” is genuinely an introduction to Mr. Kirk. He talks about his late father and grandmother, he shows you his humorous side with quips like “I fuck with you like Martin fucked with Gina/ we family like we Venus and Serena” and he gives you the overall vibe of what kind of artist and emcee he is. An “Intro” would not normally be released as a single but in this case there’s no better choice.

At times being from “North” Carolina as a rap artist incorrectly implies that an artist is not from the South. If there was any doubt what he affiliates with though YK Osiris and Gucci Mane guest star on “Gospel”, Migos rap on the thumping Tahj Money produced “Raw Shit”, while Lil Baby and Moneybagg Yo appear on “Toes”. His credentials and Southern swagger are 100% up to par throughout the album.

At the same time though Chicago’s own Chance The Rapper also appears on the aforementioned “Gospel”. Songs like “iPhone” featuring New York resident Nicki Minaj walk that fine line between both sides, featuring the kind of singing associated with buzzy syrupy dirty dirty over a banging bass bottom by SethInTheKitchen, but Nicki’s rapid fire “bad bitch” bars bring it right back to the East coast in a heartbeat.

I’m just going to be real about it and say it’s very hard to pin down what DaBaby is, and that’s entirely by design and exactly how he wants it to be. He’s from a new generation of artists that are not going to be held to the cliches of one region, one genre, or one styles. DaBaby is flexible in his approach, working with whatever artist, producer or flow best fits the song he wants to do at the time. As a result “KIRK” is an ambitious album that takes chance that mostly succeed and only occasionally miss the mark. Sometimes he seems too concerned with establishing and protecting his reputation on tracks like “Prolly Heard”, but other times on tracks like “Pop Star” featuring Kevin Gates he shows just how willing he is to spread the wealth and share the shine with fellow XXL anointed artists.

“KIRK” and its namesake defy simple description or being quickly pigeonholed. At times I yearn for him to take the talent he clearly has for writing and spitting bars and use that prowess for a more political purpose, but I can’t deny that he makes catchy songs and has an intensity to his delivery that doesn’t make him sound like a “baby” in this rap game at all. His name does him a disservice in this way. He sounds like and IS a well seasoned artist who may surprise us all with just how much he accomplishes in the music industry.