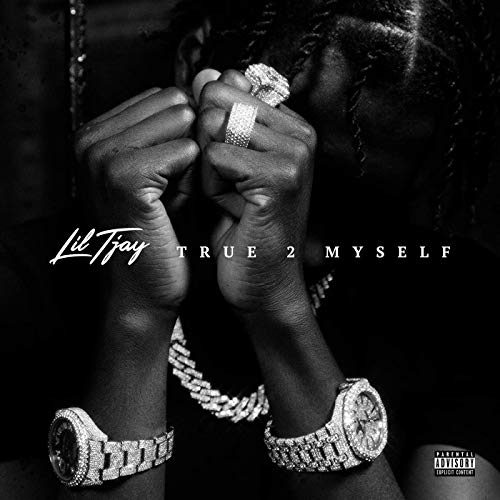 Hip-Hop Heartthrob? That sounds like something Marky Mark would have gotten from the cover of a Teen Beat magazine, but it’s actually how modern day writers are describing Tione Dalyan Merritt b/k/a Lil Tjay. It’s not an accident either. Tjay says he wants to be “the next Usher” and arguably has the looks to make girls swoon when they hear him croon. Don’t take my word for it — Google search him. With his tightly cropped hair, a perfect smile that’s all teeth, and just the right amount of baby fat still in his cheeks, the rapper looks like he stepped right out of a boy band.

The seeming innocence of his looks belies the fact that Tjay has been incarcerated several times in his young (18) life, a fact he credits for the reason he decided to focus on writing music and getting away from the thug life. “I think it’s time to shine, I’ve been waiting so long/Broski serving time, he been gone for so long” sings Tjay on “Hold On”, the lead single from “True 2 Myself”. Even though the AutoTuned vocals are syrupy sweet, the life he was living up until he started charting on SoundCloud comes through clear.

Listening to Tjay draws unbidden comparisons to Post Malone, Tory Lanez and 6ix9ine. That both helps and hurts Tjay overall. It certainly hurts his ambitions to be the next Usher Raymond, as songs like “Goat” and “F.N” are a little too explicit/gangster to gain the kind of R&B/pop crossover that Mr. Raymond has. It definitely helps Tjay in the short run though since he’s a perfect imitation of the sound/style that’s been charting throughout the late 2010’s. His songs would fit effortlessly into a club playlist or mixtape to ride too featuring any of the aforementioned artists.

“Seventeen and your boy in his prime” brags Tjay, which both dates the song since he’s older now AND gives me pause when I think about how many guns get cocked and how much Henny gets drunk in his songs. I realize kids grow up faster today than I did, and the pressure cooker urban environment accelerates that process exponentially. “Dream That I Had” makes it clear that even Tjay is aware this isn’t necessarily for the best.

“Told my brother, ‘What you need? You can ask’
‘Bout to feed you the facts, what I need is the racks
Swear I coulda really got what I need in the trap
Once I figured I could rap, mind started goin everywhere
They wanna put me in the ground and I’m well aware
Nina right here by my side, we ain’t never scared
Hit a ni**a, now he dead
Throw his body in the bag, take a road trip to Delaware”

One of the songs on “True 2 Myself” is called “Mixed Emotions” and it unintentionally describes how I feel about young Tione. The AutoTuned rap croon is not my favorite style of music, but Tjay does it as well if not better than the average rapper who does it. He actually sounds closer to an emcee than most just by the way he can smoothly fire rapid succession verbals, and the language is far less PG than pop or R&B as previously noted. He carries the melodies well, the beats are suitably thumping, and the overall presentation of “True 2 Myself” is smooth and inoffensive for nearly a full hour of music. Part of that length is padded out by remixes featuring Lil Durk and Lil Wayne (arguably the progenitor of crooned rap) but that’s certainly not unwelcome.

In the end “inoffensive” is the best word I can attach to Lil Tjay’s music. I don’t find him to be terribly innovative or wholly unique compared to his peers, but I’m not mad at listening to him. If you’re not looking for someone who is profoundly deep or lyrically woke, you could do worse than this.