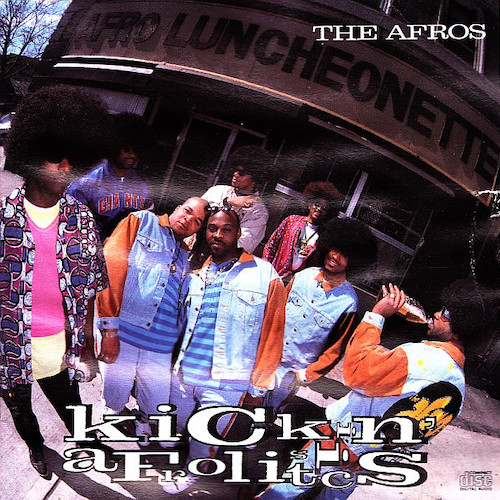 That’s the first mention of The Afros that I can remember, and much like their career it came and went in a heartbeat. It certainly didn’t occur to me that The Afros were an actual group formed by DJ Hurricane and Jam Master Jay. To me it was just a random shoutout at the beginning of a new song from a legendary rap group. “Pause” doesn’t get mentioned very often even by fans of Run-D.M.C., but it’s a classic to me at least. It’s another case of “B Side Wins Again” where the obverse of their “Ghostbusters” rap was better than the intended single. The point I’m getting at though is that “Pause” was not the way to introduce a new group. They may as well have been the “40 ounce crew” the intro shouts out or vice versa — just some friends from Hollis drinking cold beer on a hot day.

What’s funny is that “Kickin’ Afrolistics” might have come out before “Back From Hell,” the album that brought “Pause” to the mainstream. The Afros debut album allegedly dropped August 14, 1990 but I don’t have a citation to confirm it. We know the date from Run, D.M.C. and Jam Master Jay though — October 16, 1990. We also know the day the “Ghostbusters” single came out though and that’s July 12, 1989. The bottom line is that “Kickin’ Afrolistics” probably came out before October 1990. As other writers have pointed out though release dates are tricky when you try to go back to the pre-internet era of rap coverage.

The Afros managed two songs with music videos, the second being the afro pride anthem “Feel It.” Unfortunately the fact one of The Afros takes off his afro in the video shows the real problem. If it’s a movement intended to show pride in natural, curly, untreated hair then having a afro wig does the opposite. The fact that every single girl at the pool party behind the mansion gates has the same wig on exacerbates it. It turns the whole thing into a gimmick, like Kris Kross wearing their pants backwards. I’m not saying there’s a problem with wearing a wig if you’re suffering from alopecia or if cancer treatment has made it fall out. The Afros don’t appear to be doing it for either of those reasons. They put on afros just so they can be called The Afros. They don’t explain it on “Feel It” but they don’t deny it either, so it all feels like it’s being played for comedy.

I don’t think the group was intending to be a joke though. You might think so from hearing them loop “Dragnet” for a song like “Federal Offense,” but despite the lack of a parental advisory sticker The Afros are swearing up a storm and letting the bullets fly with a cold hearted “fuck y’all” in response. They even leave a snitch riddled with bullets at their hideout for the cops to find, and when the pigs discover their informant is deceased The Afros yell out “who gives a fuck about the cops” and let the guns spray. If this was produced by Dr. Dre instead of Davy DMX & JMJ you’d think it was N.W.A. Well no… that’s not true. None of these brothers are as hard as Cube, Ren, Dre or Eazy-E. Still if you thought “afro” meant “Afrocentric” then it’s a rude awakening to the fact they aren’t here to show Knowledge Reigns Supreme.

That makes the fact “Causin’ Destruction” starts with an excerpt of a speech by Malcolm X even more ironic. This isn’t a focused rage against the machinery of racism, it’s a swaggering posture as to how bad ass The Afros are and how things shatter in their presence. “You tried to flee but the bomb was atomic/hit you in the stomach and made you vomit/Now you’re left in a fucked up state of mind/with nothing to find left of mankind.” That’s the entire purpose of their rap. We’re bad. We’re so bad. We’re nuclear weapons level bad. Do you get it? We’re some bad motherfuckers y’all. “I’ma drop hard lyrics until you’re disintegrated.” Okay! We get it.

And there it is. They don’t have afros, they “wear” afros. It’s a gimmick. Not surprisingly the rap audience treated it like exactly that. They might as well have been wearing Humpty Hump noses too (R.I.P. Shock G). In fact “Jump” sounds like a Digital Underground song complete with P-Funk influenced horny horns on the hook. Now this is the frustrating thing about The Afros — this is a GOOD song. The Afros didn’t need the wigs. They were certainly not out of step with any other rap group in the 1990’s in their sound, production or lyrical ability. The gimmick that was intended to help market them instead hindered them because nobody took The Afros seriously.

I regret not buying “Kickin’ Afrolistics” back in the day, but one random shoutout on a Run-D.M.C. song plus a music video I might have seen once wasn’t going to get them over the hump. Even though Hurricane and Jay might have been enthusiastic about this idea (it came to them after watching the movie “Hollywood Shuffle”) the follow through by Columbia Records was subpar at best, and it’s little wonder there was never a second album. In hindsight if they had any other name and were less focused on wearing wigs to promote themselves they might have succeeded. Then again if they didn’t stand out for being so absurdly conceived and marketed they might have gone completely unremembered. Truthfully they almost did either way. You don’t see The Afros popping up on “where are they now” lists or people fondly reminiscing about them. Maybe this review will change that? Only time will tell.