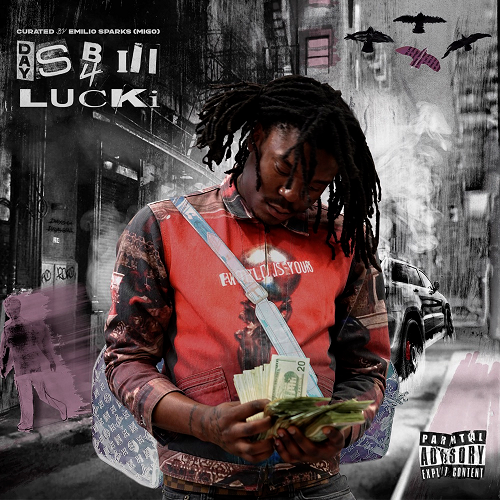 The woozy drug-rap aesthetic laid out by Lucki is a nauseating experience. The Chicago rapper has spent most of his 2019 detailing the trials and tribulations of hard drug use over otherworldly synth lines and thumping 808s. His February mix-tape “Freewave 3” played out like a bad acid trip, as Lucki toiled with constant heartbreak and disappointment – “She won’t even answer my phone but I ain’t giving up/She want me off them percs, she said she sick of us” (“Of Course You Won’t”). He mumbled his way through a deep and dark depression.

Lucki’s ethereal style takes a more optimistic turn on his newest project “Days B4 III.” The bleak anecdotes that dominated much of “Freewave 3” are replaced by sudden doses of optimism and personal affirmation. “Days B4 III” starts off with confidence and idealism. The intro track “Me Myself & I” immediately beckons self-assurance; a recurring theme throughout much of these swift 30 minutes.

“I really can’t, can’t trust nobody
Stick to myself, I’m the one who got me
Can’t have fun unless the gun in the party
Love my city, but these n*s”

Rather than succumb to his demons (a focal point for “Freewave 3”), Lucki finds alternatives for unhealthy aspects of his previous lifestyle. “4 The Betta”’s expeditious synth loop interacts nicely with Lucki’s urgent pacing and insistence on letting go – “Who do it better? In sunny weather, I keep my head up.”

The rapper’s delivery and cadence sounds clearer than ever. Instead of mumbling his way through one or two minute snippets, Lucki creates a valid presence, attacking these atmospheric beats with vigor and clarity. He’s not hiding behind the unsteady production anymore (mostly courtesy of DJ Eway); not like he was on “Freewave 3” at least. He’s trying out different tones and inflections, focusing more on his craft than the people who’ve broken his heart.

A good example of this lies within “Hollywood Dreamer,” one of Lucki’s premier attempts at finding that coveted American Dream. Or how about “Go Away!,” another instance of the young rapper curating an ideal lifestyle without the constant pain at every corner – “Can’t get high no more, tell me when it’s over/She wanna take my soul, go away.” The temptations are still there, but Lucki vies to never lose his focus. Such an intriguing transformation in the short span of eight months.

The project as a whole plays out as if it is split up into two acts. Act one follows Lucki rebuking his past demons, while act two features therapeutic sessions. The finale “Last Time Mentioning (Good Riddance)” represents an end to a tumultuous year for the young rising star. His last confessions are spilled out on the track like a final note to the girl who tore him to shreds.

His pen (or mental capacity) is clearly sharper, and far more entertaining than some of his earliest endeavors. Aside from a few tedious undertakings (“Send Me On My Way” sounds redundant in comparison to the rest of the album), Lucki crafts a compelling narrative about a drugged-out artist searching for comfort in the mundane.