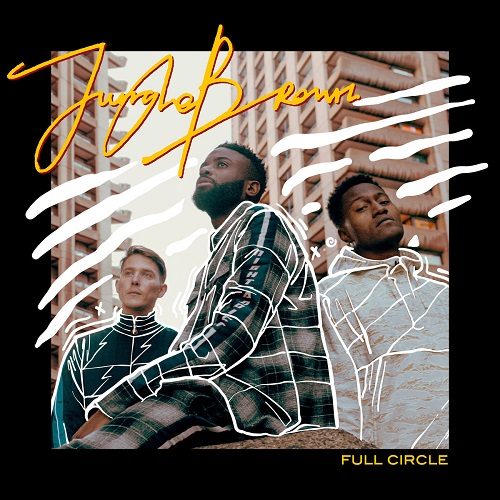 Jungle Brown sounds like a name for a James Brown tribute band. As it happens, “Full Circle” opener “Keep it Movin” interpolates the Jungle Brothers (the “in the j-u-n-g-l-e” part), who with their name tag J. Beez saluted The J.B.’s, the renowned band that in the 1970s and ’80s backed… James Brown.

So wait, do Jungle Brown in fact follow in the footsteps of the godfather of soul and creator of funk? Not directly, but perhaps by extension. With its sophomore effort “Full Circle” the UK trio serves up an eclectic dish that at times reaches back to the time when James Brown’s influence was in fact already fading in hip-hop – but at the same time was watching over it in a more metaphysical sense (while the man himself was doin’ hard time on planet Earth). The Native Tongues, shepherded by the aforementioned Jungle Brothers, were trying to do without James Brown and J.B.’s samples, creating a new soulful and playful brand of hip-hop.

These two attributes certainly apply to Jungle Brown, but that doesn’t automatically make them revivalists. If anything, it’s the fact that they reference 5 late ’80s/early ’90s luminaries in the first 2 tracks. For real, though, while the easy flows and brisk ambiance (especially in the case of “Keep it Movin”) may bring back memories of a rap group or two from yesteryear (last but not least the UK’s own Us3 project), “Full Circle” should appeal to anyone who digs music that sounds and feels like live music, and, for that matter, club music that is a bit easier on the ears and the limbs.

Jungle Brown are a different kind of junglists, but they perfectly fit into the greater picture of music of Black British origin. They don’t harp on some urban jungle theme either, instead rap about what’s currently relevant to them. “Time Ticks” tries to find the right time to leave your day job to pursue that dream, resulting in a beautifully typical piece of thoughtful indie hip-hop. While “Keep it Movin” captures the topic of resetting one’s life with joyful jazz hop, “Sometimes” argues for the need to break free from certain situations over a limber house groove and “Wayside” orchestrates a more vehement gesture that carries the same intent with wavy sounds. If the word ‘classicistic’ has never been applied to hip-hop before, it might just fit for “We On”, their collaboration with Sampa the Great, with its barely noticeable Kool & The Gang interpolation.

A number of musicians assist the group’s producer Tony Bones, most notably Ayo The Yung Afrika Pyoneer, who plays sax (and flute) on 5 tracks. While the rappers stretch their vocal chords for melodic effect every now and then, they are regularly supported by trained singers. “Ijoka” with Eldé and “Huami” with Terri Walker both stand out, but placed side by side they have less opportunity to shine individually. Another slightly questionable sequencing choice is putting “Wicked”, their tussle with underground mainstay Fliptrix, right after opener “Keep it Movin”. What’s not in question is Jungle Brown’s versatility and just general excellence. The atmospheric “Ikoja” is a glimpse into an alternative dimension where the Black Eyed Peas never began heading down the road to perdition. The Soulquarians must have looked over Tony Bones’ shoulder when he produced the superb “Huami” as his MC’s tackle the question “Who am I to you?” from different angles. But their perhaps most original artistic statement they save for last. “Custom Made” is where Jungle Brown really come into their own, as they are in no rush to develop the musical and lyrical themes all the while involving their supporting cast like true-blue musicians who know what they’re doing.

As versed as they are in equipping songs with the right mood and pacing them with the right flows, Ric Flo and MAEAR are rather freewheeling vocalists who’d do well to continue to hone their mic skills and become more aware of the automated, indeed unmotivated use of strong language. These minor reservations aside, “Full Circle” makes for a fully enjoyable, often excellent listen. “Jungle Brown’s the vibe, understand that we on it”, they say. We understand.