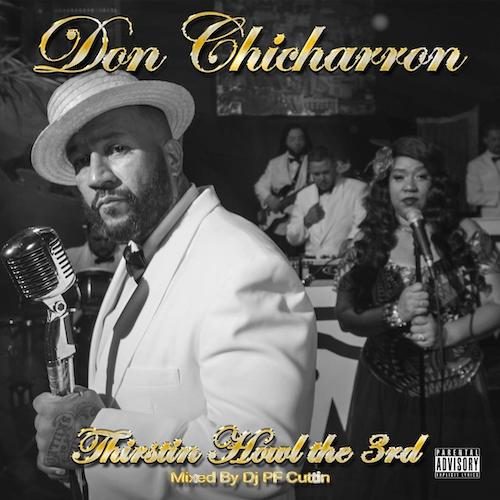 Whether or not you use the accented ó to spell it, the word chicharrón generally refers to dishes made with pork belly or pork rinds. In the United States the word often specifically refers to pork skin being deep fried, puffed and seasoned before being packaged as a cheap and affordable snack. Go to any dollar store or bodega and you’re likely to find some. In the South it’s also referred to as cracklins. Whatever you call it (and since I’m a gringo I usually call it pork rinds) it’s an inoffensive snack comparable to potato chips or cheese curls. You don’t eat it for the nutritional value.

Thirstin Howl the 3rd is not implying he is a cheap disposable rapper lacking in substance by calling his new album “Don Chicharron.” It’s an obviously play to his Puerto Rican heritage and Brooklyn roots, proclaiming himself as ubiquitous as the snack/dish he’s The Don of. Intentionally or not it also points out that Thirstin has always targeted his punchline heavy, bilingual friendly flow at a very specific audience. There have been several occasions where Thirstin was on the cusp of crossover appeal, such as his “Brooklyn Hard Rock” contribution to “Soundbombing II“, but a large part of his catalogue in the 2000’s was not available at traditional retailers by his own choice. He chose to go his own way and keep his music on the street level, which meant you had a better chance of finding it from a vendor outside the aforementioned neighborhood bodega than at FYE or HMV.

Although this has kept Thirstin Howl the 3rd’s appeal from being massive, that focus on his core demographic has built up his own Skillionaire label and business enterprise. “Don Chicharron” reflects the time and effort that Victor DeJesus has put into the Thirstin Howl brand over the last two+ decades, celebrating his accomplishments in his own way. “Chuletas In My Maleta” (“Chops In My Suitcase”) has both a figurative and literal meaning: he figuratively sounds like he’s chopping up “Guantanamera” while he is so gángster that he might be literally be walking around Brooklyn with your body parts. After all you can’t be a Don without being ruthless. The lively “Friendly but Deadly” featuring DJ Exes and Hurricane G sums it up well — he’s a nice guy so long as you don’t cross him. “Always tell the truth without being offensive” quips Thirstin.

The publicity that came with this advance copy (which is why unfortunately I don’t have many clips from the album itself to share) describe the project as “Thirstin getting back to his Latin roots.” That comes through loud and clear on salsafied but short tracks like “Gunner and a Gardner”, but the Mic Mountain produced “Sábado Gigante” also shows that crossover side of his personality. If you’ve ever watched that show on Univision even once before its run ended in 2015 you simply couldn’t turn your eyes away. That’s Thirstin Howl the 3rd at his best — charismatic, colorful, and loud. The more emphatic and erratic his delivery becomes the more compelling he is.

Over the course of an hour on “Don Chicharron” Thirstin hangs out with his friends and compadres doing pretty much whatever he wants. From the reggae inspired Beatminerz riddims of “Badness” to the chill “Papi’s Place” featuring Hakim Green of Channel Live fame (complete with “Spark Mad Izm” reference) to snaps like “New York got more Puerto Ricans than Puerto Rico” on tracks like “Puerto Rock Steady”, this is an album where Victor is HAVING FUN. That was my problem with his last album — he sounded like he had gotten too mature with time and age. To be fair though the press kit describes this album as a mixture “of new and previously released material”. True to that PF Cuttin dices it up like it was a mixtape. Therefore it’s hard to be 100 if he’s more energetic because he loosened up or because he simply dug into the archives of his old s#%t. It works either way.