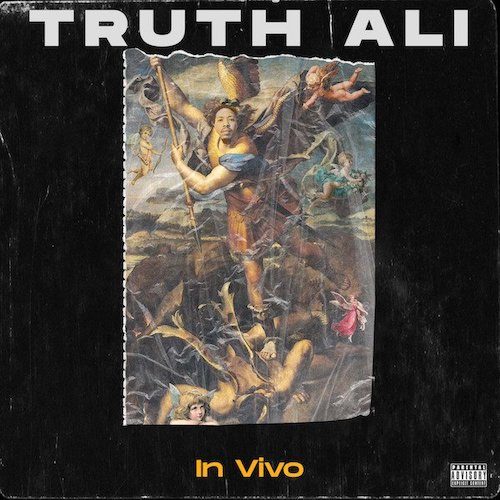 Bakersfield rapper Truth Ali recently released his first album since 2016’s “The Wonder Years”, which was headed by the single “Fred Savage.” Relocating to San Diego, his latest album, “In Vivo“, is meant as an introspective look at his own facets. Though usually a medical term, Truth flipped its definition to have a reflective connotation. As an emcee, he’s definitely multi-faceted with multiple flows, back-to-back compound rhyme schemes, and a wellspring of pop culture references. The album opener, “64 Bars” showcases the facet of him that can simply just rap. As a Cali rapper, he employs his home state’s unmistakably relaxed production on “You Wasn’t There”, a laid-back synth funk recrimination to those who didn’t help him to get to where he’s at today. He gets his Kool Keith on with “Guns in Space”, where he proclaims that “metaphors for my flow never stop” while making several astronomy references over some futuristic atmospheric production.

He gives his thoughts on social issues via “The Truth Theory”. While his lyrics were never off on that track, the production sounded bland. However, it picks up on “Frequency”. Featuring futuristic synth heavy production, Truth’s flow is good on this track. He’s got multis stacked on top of each other with pop culture references highlighting the song’s theme of not letting anyone take your joy. There’s a skit at the end of the track, a conversation between friends about a righteous emcee who’s just as low-down and grimy as they are, but it’s basically filler. “800 Pound Gorilla” has a production that makes use of the sped-up chipmunk soul sampling technique initially before getting into a more thumping beat. Truth employs a rapid-fire flow on this track.

While most of the production utilizes the familiar west coast sound, “Like a Pimp” is the first track that sounds sample-heavy even with the synths. The horns in the background evoke a 1970s image of the title, especially with Truth claiming his rhymes to be “fresher than a produce aisle.” One would think that the track “Random Thoughts” would be stream-of-consciousness rhymes, but it’s only random in the sense that each verse covers a different social issue. “Good Vibes Only” is certainly a party track. Truth shows his versatility with different styles on this track, especially with how he patterns rhymes.

The album has a few more party tracks. Not the “get-drunk and do E” kind of party, but something more indicative of California’s more relaxed atmosphere. “Make a Playlist & GO”, apart from its very bouncy beat, conveys Truth Ali’s mission statement: “My favorite music is the shit that you can ride to”, he says. “Sunday” also has a laid back, cookout-in-the-backyard, upbeat and chill vibe to it. And while some songs here are more noted for their beats, like the west coast deep bass groove on “Three Apartment Walls”, and some have more of a soulful vibe (like the piano driven family ode of “Granny Says”), “Wait a Minute” should be noted for its emceeing. Truth employed a double time flow on this track and, though he also does so on the album closer “More Life”, it works best on the braggadocio track:

The two remaining tracks, “Tears of Joy” and “Pendulum” stand out distinctively because of the former’s sharply humorous lines and the latter’s moody (almost murky) and echoing synths. Overall “In Vivo” has more strengths than weaknesses. Lyrically, Truth can rap in different styles and has no compunctions about it. Musically, the album isn’t as versatile. There’s a uniformity to a lot of the production that, though keeping the album as a solid listen, prevents it from hitting a home run.