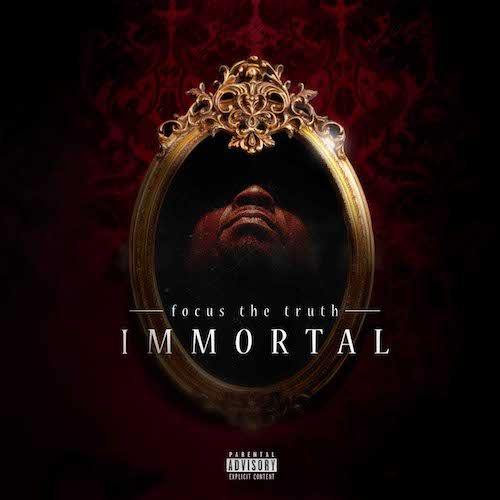 Back in the early 2000s, there was a widespread notion that hip-hop from New York City fell off. True, the Big Apple produced artists who garnered lots of success (Jay-Z and 50 Cent being the most prominent at the time), but much of hip-hop was dominated by the south and their crunk heavy production. With the sound of the south holding sway, hip-hop’s mecca no longer seemed as relevant unless they emulated those sounds, as some of its artists did. It even got to a point where people around my own way were immediately dismissive of almost any hip-hop from up north, deriding it with many adjectives along the lines of “corny”. The point with that anecdote is something we all know: New York City’s hip-hop, the essence of it, isn’t dead. And as pervasive as hip-hop now is, it’s far from dead. You just have to use your ears to guide you. Mine have recently led me to a Queens emcee named Focus The Truth. His album “Immortal” is steeped in traditional east coast hip-hop for the most part. After multiple listens, I can honestly say that while Focus is not the greatest of emcees, he is to his borough what fellow rapper Skyzoo is to Brooklyn.

The album opens with its title track, which begins with a TV dialogue sample. The production and lyrics are straight-up New York rap: Urban and a lyrical assault with wordplay and polysyllables. Most of the guest stars enlisted are from his borough and that almost makes “Immortal” a concept album. “Northside to Southside” features Tony Yayo and strengthens the Queens connection. Focus’s raps are well-crafted while Yayo sounds as gruff as ever. The beat itself is airy and seems comprised of an improv jazz sample. The best featured cut is “Gravediggaz”. The whole track is boom bap down to its hard drums and interspersed piano keys. Despite the title, it isn’t horrorcore and features TGIFLY and Kyah Baby, both from Queens. Kyah has the best verse with gems like “Cats is pussy, the only thing y’all missing is breasts”:

The very lush, atmospheric beat from “Days of Our Lives” is matched lyrically by its journal entry format, with the theme of motivation sprayed on every word imprinted on that journal page. Focus’s multis are nice here as well. The album’s producers are largely unheard of, but S Eyes Finest produced “Northside to Southside”, Gravediggaz” and “Days of Our Lives”, showing a versatility in the forms that east coast rap production can take. I know of New York producer V-Don, who laced the title track. But the one producer behind the boards on this album whose name instantly rang out for me was Daringer. Griselda Records’ in-house beatsmith provides a boom-bap sound for Focus and fellow Queens native Ayo Da Don. With “Freedom of Thought”, Daringer combines some dusty drums and a looped keyboard sample:

V-Don returns to provide a very interesting beat on “Dear Father”. The beat is spacey and echoing, like something underwater, which highlights Focus’s flow, as it sounds its sharpest here. Lyrically, it’s autobiographical with several punchlines. Family and community are also in his Focus’s sight as well.

The S Eyes Finest-laced “Survivor’s Guilt” is social commentary. Multiple instruments are sampled to reflect the inner-city blues theme of the lyrics, the experience of the young Black man in America and examining how that effects the legacy they pass down. Which brings us to “Legacy / Xavier’s Freestyle”, a dedication to his son, but the low-keys and heavy bass make the beat sound muddled. However, its producer, Smoke Indoors, finds redemption on “Pay to Play”, with its reverberation effect on the vocals and drum snares. The theme of the song is basically “We want it easy, but it’s all a game. One which charges a price.” Elle Simone provides the hook, while Vo has the best verse and sounds like Styles P. Speaking of which, the album closer “We All In” features the Ghost himself, and the two east coast rappers tear apart Geekey’s trap-esque beat.

“Immortal” has all the qualities which prove that NYC hip-hop has not gone the way of the dodo. It’s drenched in east coast traditions and Focus has flow, delivery, and rhyming down pat. My suggestion to complete his lyrical package? Create conceptual and storytelling songs. He’s already demonstrated an eye for detail with his rhyme schemes and analysis of both his surroundings and self. So some outside-the-box creativity wouldn’t land too far from the tree. All-in-all, “Immortal” is sure to satisfy hip-hop heads who have a serious jonesing for NYC rap.