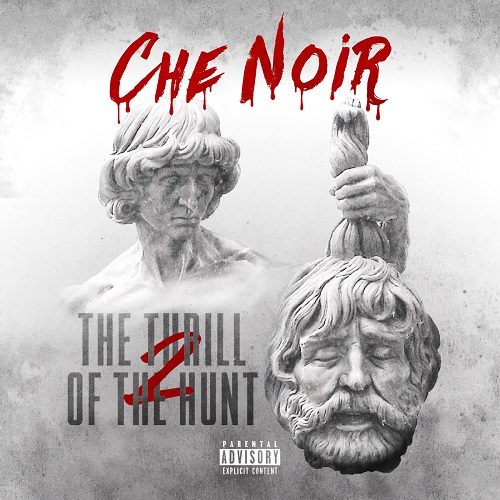 Transcripts show that so far at least one rap artist thought of the self-evident rhyme Attila the Hun/thrill of the hunt. The insatiable 5th century conqueror Attila, king of the Huns, who with his hordes overran large parts of Eastern and Central Europe and whose expeditions of conquest took him far into Western Europe, was very likely no stranger to the thrill of the hunt, that state of excitement that easily tilts towards obsession but also has a more peaceful equivalent in the philosophical phrase ‘The journey is the destination’.

Taking her symbolism in another direction, Che Noir illustrates “Thrill of the Hunt 2” with a portrayal that seems to allude to a specific decapitation in history or mythology. It is in fact a detail of a sculpture depicting David having severed Goliath’s head with his own sword (after defeating the superior adversary with merely a sling). After the artwork for the first “Thrill of the Hunt” chapter featured Diana, Roman goddess of the hunt (or alternatively her Greek precursor Artemis), Che Noir could have also chosen a female figure behind the beheading of a man. Judith, Hebrew widow, who is said to have cut off the head of Assyrian general Holofernes herself, or another Biblical figure, Salome, who, on behalf of her mother Herodias, demanded the head of John the Baptist and had it served to her on a platter. Because the self-appointed Queen of Upstate has evidently come to let heads roll. “I came in the game to be the best, I ain’t came for friends”, she warns on “Fountain of Youth”.

Strictly single 16’s and no hooks, this is apparently only an appetizer as the Trust Gang member prepares her studio debut “The Essence”. Which is likely to happen because the Trust Comes First camp so far has proven reliable. There’s a certain branding to these records coming out of the 716 that also comes through on “The Thrill of the Hunt 2”. We can accord this local scene with more than regional reach to contribute to the renaissance of gritty street rap, but the kind of artificially elaborate street rhetoric all these upstate guys engage in (that goes especially for the much touted Griselda bunch) has become a bit too uniform.

Indeed on her first mixtape to fully feature original beats, Che Noir often comes across like a female version of her mentor 38 Spesh, from the way she emphasizes to the structure of her lines. She explicitly denies employing ghostwriters on “Kiss the Ring”, where she also firmly declares, “I got hustle in my DNA / The first woman in my family who ain’t tryina be a CNA”.

Despite some hurdles to overcome, “The Thrill of the Hunt 2” establishes Noir as an MC with interesting things to say. She has, foremost, a flair for vivid imagery. Whether it’s a simple “I learned to stand up when my back was against the wall” or pain-inducing punchlines like “You think we squashin’ beef but we probably didn’t / I don’t bury hatches unless I bury the body with it” or pearls of wisdom like “Grandma told me never burn my bridges cause them waters deep / I ain’t listen, but them deep waters taught me how to breathe” or more wide-ranging lyrical efforts. What she doesn’t have yet are songs.

Although she’s getting there, towards the end of the tape. “Sandcastles” manages to present biographical information beyond mere bragging. “Bloody Sword” and “2 Summers” position the character in regards to institutions such as school, the church, prison and the streets while “Today” closes the book on a broken relationship. Also “Dying Breed” efficiently pairs her with her producer 38 Spesh for some up-to-date back-to-back rhyming. The standout cameo comes from Planet Asia (“Bloody Swords”), whose contemplative voice matches the host’s evolving graceful flow.

Che Noir’s longing to be something special by way of this rap thing is palpable. She shows considerable promise, mainly on the purely lyrical level, where she not only recalls 38 Spesh but also latter-day apostles of classic rap such as Smoke DZA or Joell Ortiz, upgrading her writing with noble imagery, all across different moods. Frivolous: “These hoes know I’m Picasso when I paint the town”. Sarcastic: “He tried to pour his heart out to me but I ain’t pay for the drinks”. Menacing: “Before a bitch cross me, she better look both ways”. Conscious: “They took our history and gave our black Jesus vitiligo”. Dramatic: “You live a certain life, the grim reaper givin’ promise rings”. And those are just the one-liners.

To be perfectly clear, “The Thrill of the Hunt 2” doesn’t have enough to offer to judge it thoroughly favorably like this site so often does even for short-winded projects. This being a stepping stone, Che Noir is expected to land on a higher pleateau the next time she touches down. Since she’s not explicitly gangster, she might as well tone down the violence. A distinct identity grounded in reality would also prevent misguided boasts of “bars straight up out that crack era”. Also the music, while generally pointing in the right direction, has to grow in stature. “The Thrill of the Hunt 2” is good for what it is. It’s not great mainly because it’s not laid out to be. But with that much gift of gab, Che Noir is sure to turn heads in the future, at the very least.