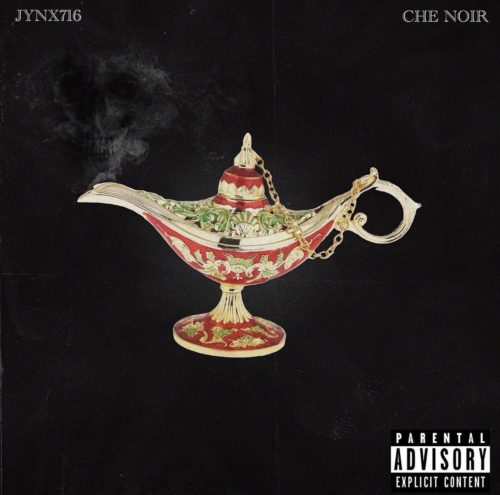 Jynx716 x Che Noir :: Careful What You Wish For

Buffalo, New York emcee Che Noir has built a strong reputation in recent years, initially bursting through under 38 Spesh’s tutelage and often utilizing that trademark flow Spesh and Ransom have mastered. Where the former excels in wit, and the latter in advanced penmanship, Che Noir has shown she has more to her arsenal than either. The Apollo Brown collaboration “As God Intended” two years ago is a potential classic (at least in the underground) as it demonstrated a great balance between vulnerability and durability that defied her youth. It’s easy to forget Che Noir is only in her mid-20s. This project by Jynx716 is produced by Che Noir, who demonstrated her production talents on her own record “After 12” in 2020. So who is this Jynx716?

Jynx is an emcee from Niagara Falls that emerged a few years back, making an appearance on the aforementioned Che Noir project “After 12”. From the single “Focus”, you’ll get the gist of what Jynx is all about but it’s a song that sounds so much like a track from his peers it’s as if it was crafted for Che Noir herself. Production is relatively hit-and-miss throughout the six tracks, with the worst being a repetitive “Wake Up” that could well be alarm clock music.

I do like the electric guitar Che uses on “Electrifying” and it’s the best solo track on offer here. Jynx716 is serviceable on the mic, perhaps not doing justice to some of his written rhymes. He’s sharing some thoughtful lines (“I’m trained to think ahead so the future’s really my present”) and it takes a while to adapt to his style, as there are no punchlines or stacked internal rhyme schemes. If you can get past the fact he’s not pulling up trees with his approach, he’s laying down some heartfelt tales from his experiences in the street.

At only seventeen minutes, this EP helps introduce Jynx716 to a wider audience but his style simply isn’t unique enough to give him the identity needed to hold his own with heavy hitters like Che and Ransom. The highlight is the Ransom verse on “Legacy”, but that’s to be expected given he’s arguably the hottest emcee in the game right now. Vocally, Jynx is somewhere between Eto’s higher pitch and Flee Lord’s griminess without the charisma of either. That’s not to say “Careful What You Wish For” is completely redundant, but in the crowded market of underground street rappers, this offers little new despite being mostly solid hip-hop.