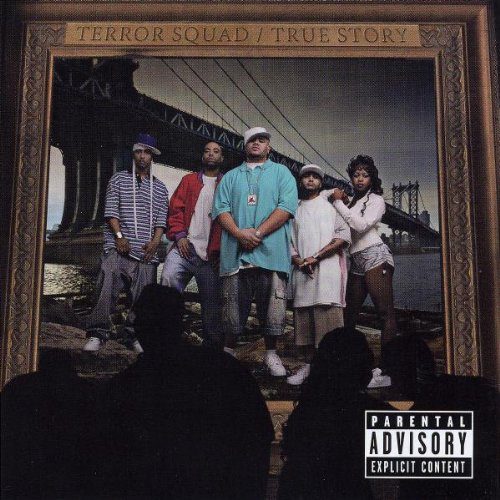 Ready to bring hip-hop back to their beloved Bronx borough, the Terror Squad has endured member changes, death, and rumors of dispersion to drop their sophomore effort “True Story.” Since the release of their self-titled debut album in 1999, the Fat Joe-led crew has seen original members Cuban Link and Triple Seis depart, and super-lyricist Big Pun unfortunately pass away. With loss, though, comes room for addition, as Pun’s female protÃ©gÃ© Remy Martin and R&B specialist Tony Sunshine have passed initiation to join Joey Crack and his loyal brethren Armageddon and Prospect.

Backed by a diverse arsenal of beats, “True Story” oozes with new life, as each song sounds like it was recorded with something to prove. Fat Joe seems reinvigorated, staking his claim into the sought-after title of ‘King of New York,’ while Remy Martin appears on seven of the album’s 12 cuts in hopes of locking her spot as the game’s strongest feminine MC. Both Joe and Remy dominate “True Story,” a point that actually brings the record down in overall quality. It’s not that either isn’t capable of holding down the fort. The problem is that the end product sounds more like a “Bonnie and Clyde” album for Joe and Remy, with only scattered guest appearances from the rest of the Squad.

“Nothing’s Gonna Stop Me” begins the story, sporting a soulful blend of vocal samples and melodic blues for Fat Joe to warn his opposition alongside a surprisingly able rap verse from Tony Sunshine. The laidback mood of “Nothing’s Gonna Stop Me” quickly energizes courtesy of a brutal Scram Jones production on “Yeah Yeah Yeah,” pounding ear drums with a militant backdrop strengthened by rolling percussion and powerful horns. The ante is upped even higher on the amazing “Bring ‘Em Back,” where the guitars and violins sounds utilized by Lord Finesse are blessed with verses from the late Big Pun and Big L, while inspiring Fat Joe to spit fire:

“Ay yo, I’m old school like Rick the Ruler, sick jewels, the big Buddha
Lift dudes with six-shooter Luger (Pull Up!)
That means ‘bring it back’
NY, king of that, the best tried to dead mine but just can’t see to that
The forthcoming, don’t look now, there’s more coming
Now we all stunnas with lil money but still hungry
True Story, once threw a nigga from a two-story
Asked for my paper, he said there was nothin’ he could for me”

Remy Martin makes a star turn on the current summer anthem “Lean Back,” but the rest of her bars heard on “True Story” never approach quotable status. She speaks on typical topics such as wack bitches, drug practices, and other generic issues with sufficient skill that lacks the special qualities needed to launch her into rap stardom. “Streets of NY” is her one chance to exhibit verbal diversity, but she is upstaged by the vocal power of Tony Sunshine and Emile’s upbeat instrumental. Armageddon, who has showed much promise in the past, also does little to push his lyrical game to the forefront. While he does tug emotional strings on the heartfelt “Pass Away,” he is only allowed two other songs to rhyme on, one being the formulaic radio-friendly jam “Take Me Home.”

Despite a mere three verses on the whole album, Prospect manages to display the most potential, showing that “True Story” has more to offer than simply tracks for Fat Joe fans. He shows and proves solo on “Thunder in the Air,” attacking Armageddon’s darkly ambient beat with pure honesty and introspection. “Hum Drum” features sick beat work by Cool & Dre, sampling of 10 c.c.’s ” Dean & I,” which was used to a lesser degree on “When the Chips Are Down” off of the Lloyd Banks album. Prospect completely outshines Remy and Armageddon on “Hum Drum,” bruising the track with his polished flow:

“Yo, this the upcoming success, definition of Prospect
Put your money on me, you’ll get recognition and profit
On any condition I drops it, on a mission
Don’t listen to gossip, when I’m splitting impostors
Sort of like a mobster, and my niggas I got ya
We all gonna be eating soon like Italians with pasta
Smoking weed and eating curry chicken like the Rastas”

With only one truly suspect selection (the painfully Neptunes-sounding “Let Them Things Go”), “True Story” is a solid release that will help Fat Joe and his Squad rep the BX to the fullest for months to come. Worthy of listens, the album can’t help but hint at something better, though. Stronger emphasis on lesser known Squadians Armageddon and Prospect would have greatly benefited “True Story.” It’s obvious that Remy Ma is next up to bat, but based on her overall performance here, marketing muscle may be better flexed behind her associates. Rock-solid production helps to distract listeners from these grievances, however, so Terror Squad should bump in speakers nationwide without hesitation.