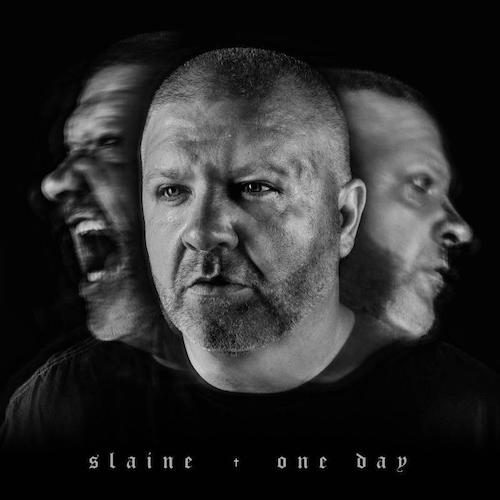 “Take it ONE DAY at a time.” It’s an idiom that’s espoused at meetings for Alcoholics Anonymous, Narcotics Anonymous, or any support groups that deal with overcoming addictions. In recent years, sobriety has become a recurring theme for the Boston rhymesayer known as Slaine. His frequent references to his old habits of cocaine and whiskey are indicative of his battle against his inner demons. As such, it’s fitting that his album is titled “One Day”. His first album in five years, Slaine being clear-headed has not dulled his ferocity on the mic in the slightest. He’s always had a penchant for aggressive lyrics delivered with a raspy, but gutter flow reminiscent of Vinnie Paz (who’s actually featured on this album), but “One Day” is the first time he’s channeled that aggression in surprising ways. For the most part, his pen game on this album is sharper than before and he has songs that are just as introspective as they are just straight emceeing.

The New York-born, Boston-based producer known as The Arcitype was behind the boards for nearly every track on “One Day”. His productions range from a spectrum of grime to a polished glint. But whether it’s a traditional-sounding hip-hop beat or something with an upbeat gleam, Slaine met each challenge that Arcitype’s beats posed to his rhyme style, adapting his flow in, again, surprising ways. His guest features were also well-selected. Slaine made the smart choice of enlisting emcees who won’t surpass him on his own track, but will still bring their A-game nonetheless. The track “Broken Toys” is an example of where the emcees sound equally matched. The posse cut features Apathy and Locksmith and both men shine with Slaine in delivering complex rhyme schemes containing brutally cutting lines. Also, of note is “Still Got My Gun” featuring Rite Hook, Ill Bill, and the aforementioned Vinnie Paz. Over Arcitype’s orchestral productions, each emcee spits about how their setbacks couldn’t hold them back:

The Arcitype’s production is decidedly boom-bap on certain songs, especially on “Time Is Now” and “Trick the Trap”, the latter being a storytelling track about the random chaos of the trap life. That lyrical theme is continued on the karmic “It Catches You”. Though it benefits from additional production from The Arcitype, the primary producers on the track are 9am and Samuel Burke, which account for the gloss that it has. For the song structures, many are comprised of just two verses with a hook sandwiched in between, the sole exception being the posse cuts, of course.

The solo songs containing up to three verses are Slaine’s most personal, particularly the album closer “Do What You Love”, “Can’t Stay the Same”, and “The Day Before I Die”. The latter has Slaine lyrically detailing how he handles a potential relapse. The song before that, “The Feeling I Get”, follows a similar topic. What’s interesting is that this song and the album opener, “Redemption”, have him using similar flows which are amazingly dope. “Redemption” was the first single and was lyrically fire from right out of the gate. Making use of his usual multi-syllabic rhyme schemes, his aggressive flow is both relentless and focused all at once:

The first single captures what Slaine’s overall goal is with this album: Personal redemption. Everyone has room for self-improvement, some more so than others. Throughout most of his career, Slaine’s journey has been one of improvement. Not just of mic skills and penmanship, but of himself as well. It’s often said that even a former alcoholic gets the urge to have a drink. Slaine has the same struggle with his personal demons, but he’s fought it by being productive through his music. And with this album, those are battles that he continually fights within the recommended time allotted to do so: One Day.