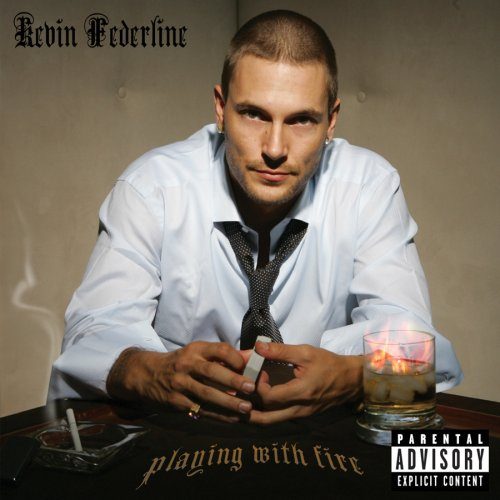 On his one and only album “Playing With Fire” Kevin Federline describes himself as “America’s Most Hated”. If you’ve never heard of K-Fed before this review you’re probably dumbfounded, and if you were around for his marriage to Britney Spears you’re probably saying “Hell yeah he was! Total piece of shit.” In fact he was so infamous in the mid-2000’s that Family Guy roasted him in one of their now cliche cutaway gags, and I’m sure Seth MacFarlane has never had an easier target to aim at before or since.

So what did The Notorious F.E.D. do to earn this distinction? Becoming Mr. Spears was probably enough in and of itself. The tabloids had a field day with his personal life, including that he had two children with actress Star Jackson before his marriage, and a five episode reality show about K-Fed’s engagement and nuptials only increased the perception he was a “gold digger” in a tank top. He seemed to be riding on Britney’s coattails as a former backup dancer who now had the resources to put out a rap album. Everything he had seemed undeserved and consequently everything he did was excoriated by the public. He wasn’t wrong to say he was that hated and if anything may have actually understated the public ire towards him.

“I’m the talk of the town – that’s the reason why they stare/Four karats in my ear, if you look see a glare”. K-Fed understood the public’s reasons for hating him and turned the volume up WAY past 10. “I got my name spreading faster than crack/And that’s just a fact/Sucked in America’s hate, now I’m passing it back”. The thing nobody said at the time is that the track was actually GOOD. That’s 70% due to J.R. Rotem lacing up an instrumental with a banging piano backdrop, but 30% can be attributed to the fact Federline is in fact trying really hard here. He’s on beat, his vocals are clear, and the lyrics are what in pro wrestling parlance would be called “heel heat”. It’s supposed to piss you off. He’s playing a role and playing it VERY well. It’s no surprise that he wound up in a televised WWE feud with John Cena.

There’s a genius to his public persona from the era I have to salute and give props to. If the whole world is going to hate you, find a way to use it to your advantage. I’m sure people bought “Playing With Fire” just to set it on fire or crush it under the wheels of an automobile. Did Federline care? Of course not! You bought the album, he got the money, he still wins. History also shows that between him and Britney Spears, the one everybody hated him for marrying, HE was the stable and well adjusted one out of the two. The divorce and her subsequent meltdowns resulted in him being awarded sole legal custody of their children together. Maybe the real heel was Ms. “Hit Me Baby One More Time” herself. She did do one track with K-Fed on the album though produced by Bosko called (ironically enough) “Crazy”.

Now I’d like to tell you that Mr. Federline was able to sustain his gimmick for the length of an entire album, but that simply wouldn’t be true. A lot of the songs on “Playing With Fire” are not good even judged by the standard of “he did it just to make you mad” because they’re too weak to even inspire any ire. “Kept On Talkin'” has a lot of terrible lines like “paparazzi on my nuts like a squirrel” that should never have been written down or said aloud. “Snap” has a middling beat from Young Classic and his obsession with tabloid reporters is evident with the bar “I hate haters like the fucking paparazzi”. I would guess his life is better in 2020 because nobody cares enough any more to follow him everywhere with cameras. Then again he may miss the “Privilege” his fame and notoriety afforded him back then.

If the whole album had been produced by Bosko and J.R. Rotem it’s possible it would have been better received… nah I can’t say that with a straight face. The entire thing could be laced by Primo and Dr. Dre and the whole world would still have hated it. The lowest rated album on Metacritic is a distinction that K-Fed may hold for the rest of his life unless the site disappears like his rap career. After listening to rap albums for 35+ years though I can easily say with no hesitation I’ve heard SO MUCH WORSE than Kevin Federline. I can at least draw some degree of amusement from how good he was at riling people up, his flow is better than the “mumble mouth” rap generation, and the production is on the whole quite good. The downside is Federline can only talk about how rich he is and how much you hate him for so long before “Playing With Fire” burns up into ashes.